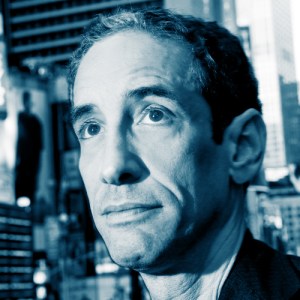 Douglas Rushkoff is the author of Throwing Rocks at the Google Bus: How Growth Became the Enemy of Prosperity, as well as a dozen other bestselling books on media, technology, and culture, including Present Shock, Program or Be Programmed, Media Virus, Life Inc and the novel Ecstasy Club. He is Professor of Media Theory and Digital Economics at CUNY/Queens. He wrote the graphic novels Testament and A.D.D., and made the television documentaries Generation Like, Merchants of Cool, The Persuaders, and Digital Nation. He lives in New York, and lectures about media, society, and economics around the world.

Articles by Douglas Rushkoff
The Russians aren’t coming to Silicon Valley, they’re already here
January 21, 2017
Donald Trump is a media virus, but we’re the ones spreading him
How do we end the advertising arms race? Start thinking like humans
The best smartphone is the one you already own
No secrets, no shame: How technology forces honesty
What happens when anyone can code? We’re about to find out
Dial 1 for euphoria: What happens when we can zap our brains into any mood?