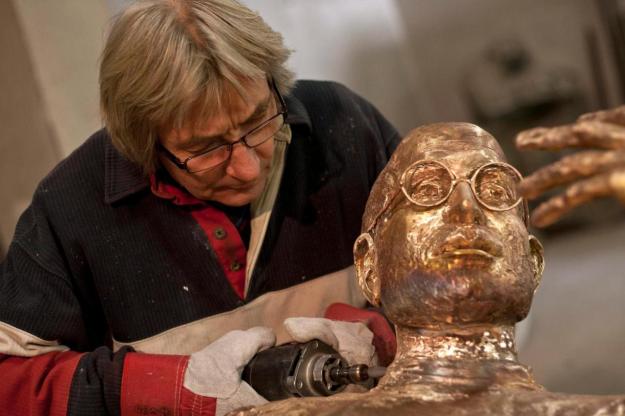 If anyone doubted that the passing of Steve Jobs had global implications, a new statue of the Apple co-founder set to be unveiled in Budapest later this month offers proof of his far-reaching influence.

The statue was commissioned by Hungarian software company Graphisoft, and will feature a bronze likeness of Jobs wearing his familiar mock turtleneck, jeans, and round glasses, with arm outstretched in a typical product-presentation pose. Standing nearly seven feet tall, the statue will be unveiled December 21 in Graphisoft Park, a complex in Budapest that’s home to several tech companies.

Graphisoft founder Gabor Bojar credited Jobs with supporting the company when it was still in its infancy and under communist rule in Hungary. Bojar met Jobs in 1984 during a trade show in Germany when Graphisoft was presenting an early version of its ArchiCAD design software.

“Steve Jobs was very much convinced about the technology and he offered financial and also marketing support for the company,” said Graphisoft’s director of global marketing, Akos Pfemeter. “We received some financial support and Steve Jobs helped us distribute our products in the Apple distribution network.”

The statue of Jobs was created by Hungarian sculptor Erno Toth, and will also include a plaque in the shape of an iPad with a quote from Jobs: “The only way to do great work is to love what you do.”

Google wants to make it easier for you to find your dream job
Will robots take your job? Website estimates which jobs will be automated
Australian commission denies banks’ right to negotiate as group with Apple
PC microphones helped steal hundreds of gigabytes of data from Ukraine firms
How to record your computer screen
How to save a webpage as a PDF
How to download music from YouTube
How to find archived emails in Gmail and return them to your inbox
How to sync your Outlook Calendar with your Google Calendar
How to block an email address in Gmail
How to easily log in to multiple Gmail accounts at once
How to change your Yahoo password
How to download Vimeo videos to your PC and phone