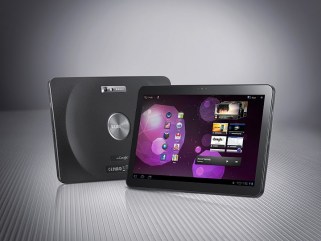 A German court has barred Samsung from selling its Galaxy Tab 10.1 device in all European countries except the Netherlands. A separate lawsuit is underway there. A Reuters report said that a district court in Dusseldorf granted the preliminary injunction on Tuesday.

The ruling, which agrees with Apple’s claim that Samsung has replicated elements of the iPad’s design, will come as a bitter blow to the Korean company.

It comes just over a week after it agreed to stop selling its Galaxy Tab 10.1 in Australia over a patent dispute there with Apple. Samsung may bring out a version of the device especially for the Australian market.

The ruling in Germany is the latest chapter in a long-running dispute between the two electronics giants concerning smartphone and tablet patents that began four months ago.

A lawsuit filed by Apple in the US back then said: “Rather than innovate and develop its own technology and a unique Samsung style for its smartphone products and computer tablets, Samsung chose to copy Apple’s technology, user interface and innovative style in these infringing products.” Other patent-related lawsuits followed, including the one ruled upon by the German court on Tuesday. Samsung has also countersued the Cupertino-based company.

Apple will no doubt be delighted with the ruling. Samsung’s Android-based Galaxy Tab 10.1 is one of the main rivals to its popular iPad. However, Steve Jobs and co. obviously feel they have a case regarding its patents, and the removal of Samsung’s tablet from the European market, at least for the time being, will no doubt boost iPad sales.

Ticonderoga Securities analyst Brian White makes a similar a comment. “Samsung is one of the few OEMs in the world with [the] ability to enjoy success in both the smartphone and tablet markets,” he told Reuters, adding, “However, if Samsung is violating Apple’s IP rights, we believe Apple could enjoy even further success in these markets in the coming years.”

Samsung has made no announcement about whether they intend to appeal the decision.

Will Google ever lose its throne as king of search? Here are its main contenders