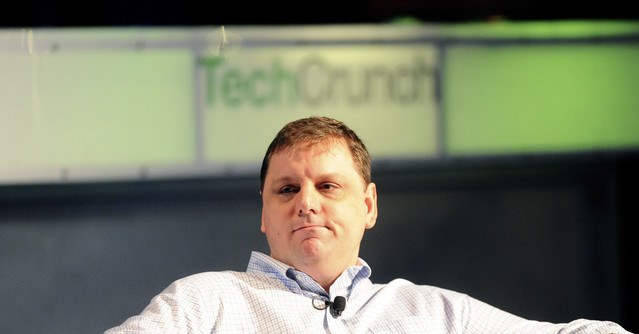 By now you’ve heard that something unpleasant has been going on over at AOL.

Earlier this summer when we first caught wind of TechCrunch founder and co-editor Michael Arrington’s speculated angel investment fund to-be, we thought it sounded like a potential problem. You’d imagine that writing about startups while simultaneously managing their careers could present a conflict of interest – and you’d be right.

Arrington announced Crunchfund last week, and the fallout hasn’t stopped since. The quick and dirty of it is that Arianna Huffington, who controls content at AOL since its merger with the Huffington Post, relieved Arrington of his duties. AOL issued the following statement today:

“The TechCrunch acquisition has been a success for AOL and for our shareholders, and we are very excited about its future. Michael Arrington, the founder of TechCrunch has decided to move on from TechCrunch and AOL to his newly formed venture fund. Michael is a world-class entrepreneur and we look forward to supporting his new endeavor through our investment in his venture fund. Erick Schonfeld has been named the editor of TechCrunch. TechCrunch will be expanding its editorial leadership in the coming months.”

Try as it might, AOL can’t take all the discontent out of the situation. The site’s announcement did little to hide its sarcasm over the press releases’ use of the term “decided to move on,” when it’s become incredibly clear Arrington was forced out.

And to further complicate matters, there’s the issue of a possible AOL-Yahoo merger in the mix. This proposed deal has made the rounds for years now, but with the two sites facing intense public scrutiny and finally identifying as media companies, now could be the time. It’s like some twisted, tech love triangle: Arrington wanted TechCrunch back, AOL wants TechCrunch but only without Arrington, and Yahoo might want AOL.

If this whole thing sounds strangely familiar, that’s because it is. Earlier this year AOL property Engadget experienced something of a mutiny when its head editorial team jumped ship, creating This is my next (soon to be The Verge). As readers know Engadget is now a very different site, and essentially a less-read one. AOL knows niche sites are a good buy, but they are typically headed by strong-minded teams, and the two don’t always gel.

It’s too soon to tell if TechCrunch faces a similar fate as Engadget, who will bail, or how the site will be molded by Schonfeld’s leadership. Our interest is also piqued by AOL’s admission that TechCrunch will be adding to its editorial staff in the near future, and we wonder if some of the Huffington Post team will be making their way to the Arrington-less site.

There’s rampant speculation about what this means for the tech and startup industry: Some say it means TechCrunch can no longer act as a gatekeeper of sorts, deciding which startups do and don’t deserve mention. Others say losing Arrington’s brash honesty will mean more puff pieces on startups that otherwise wouldn’t make the cut. But what seems to be more significant in all this is how it will determine AOL’s fate. The company has made it clear, especially since the HuffPo merger, it’s moving toward media. But these management fumbles makes us wonder if that’s a very secure future for the site.

TechCrunch’s Michael Arrington leaves to start $20M venture capital fund
Rumor: TechCrunch’s Arrington launching Crunchfund investment firm
How to download music from YouTube
How to find archived emails in Gmail and return them to your inbox
How to sync your Outlook Calendar with your Google Calendar
How to block an email address in Gmail
How to easily log in to multiple Gmail accounts at once
How to change your Yahoo password
How to download Vimeo videos to your PC and phone
Kaspersky VPN should be your go-to for secure connections and privacy
Here are two awesome Santa trackers that kids can use today
Install these Chrome extensions on your relative’s new laptop
SpaceX launches more Starlink satellites and reveals latest customer count