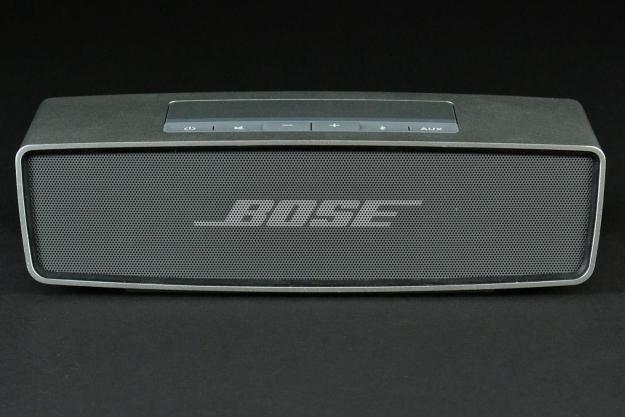 “Bose’s SoundLink Mini cuts out the deep features and stylistic extras to provide an attractive, minimalist speaker with a rich and potent sound signature.”

If there’s one thing Bose likes to talk about, it’s technology. Along with its popular line of noise-canceling headphones, the company is perhaps best known for its scourge of infomercials, promising huge sound from small, elegant devices thanks to Bose “wave technology.” So it was perhaps inevitable that the company would eventually turn its attention to the exploding market of small, portable Bluetooth speakers. Bose’s contribution to the field? The SoundLink Mini.

Crafted from aluminum into a sleek, dual-faced block, the $200 SoundLink Mini encapsulates both Bose’s famed refinement and the company’s infamously elevated price points. Still, whether we admit it or not, most of us have likely been intrigued by the countless testimonies from Bose customers who simply can’t believe how magically full the advertised product sounds. We sampled the SoundLink Mini for a taste of that magic ourselves, and here’s what we discovered.

Predictably, The Mini is packaged in a way that exudes quality from the moment you pick up the box. Heavy cardboard and dense foam cradle the speaker, which emerges feeling like a heavy little brick. The SoundLink mini is framed in a solid sheet of glittered aluminum, with beveled edges bowed at the sides. Dense plastic speaker screens adorn the front and back faces, and a rubberized strip of controls across the top mimics the rubber base underneath.

In a second box we found a packet of instructions, a DC adapter, and a slim black charging pad.

The Sound Link Mini exudes an elegant aesthetic while also feeling extremely durable thanks to its robust outer shell. The exterior design doesn’t stray far from the standard Bluetooth speaker formula. Its rectangular case is reminiscent of several competing models, such as the Jlab Crasher, the Braven 600 series, and countless others. That said, Bose brings its own touch to the formula, as the Mini’s rounded shape, succinct style, and substantial weight of around 1.5 lbs give the speaker a premium feel that’s decidedly more solid than most of its contemporaries.

The control strip at the top of the speaker consists of a self-explanatory row of charcoal-grey keys for power, mute, volume, Bluetooth pairing, and Aux input, as well as indicator lights for battery charging, and pairing. Once paired, the speaker can remember up to six devices at a time.

Apart from charging on its cradle, the speaker can also be charged by plugging in the power cable directly. The SoundLink Mini’s battery life is estimated at a relatively low 7 hours, making it less travel-friendly than some competitors like the aforementioned Braven 600, which offers over twice that longevity. Between that and the charging cradle, the Mini seems to be tailored more for the home than sojourns into the great outdoors.

Audio from the speaker comes from its twin “high efficiency” active drivers, as well as its centralized passive radiator system, which employs dual driver cones at the front and back for maximum low frequency response. The drivers also run through Bose’s proprietary digital signal processing (DSP).

The feature set for the speaker is surprisingly thin. While a wide array of challengers are frantically raising the bar of included options, offering everything from smartphone charging to gesture control, the Mini doesn’t include so much as a speakerphone – a standard option in the category. Instead, Bose seems content to rest on its audio laurels, counting on superior sound performance to edge out the competition. The company does offer a few accessories for the speaker such as a variety of colored shells and a carrying case, but the upgrades will cost you $25 and $45 respectively.

So, here’s our TV quote, primed and ready for the next infomercial: “Wow! I can’t believe a speaker so small can produce a sound so big!” Cheesy and cliché? Yes. But also fairly accurate. The Bose SoundLink Mini really does sound much bigger than almost any speaker of its like, at times kicking out a massive, rich sound signature that contradicts its miniscule stature.

The SoundLink Mini’s battery life is estimated at a relatively low 7 hours, making it less travel-friendly than some competitors…

While Bose doesn’t disclose a frequency range for the Mini, we’re willing to wager it’s among the widest of its class. On top of that, the speaker also offers a high max volume, good dynamic range, sharp detail, and decent stereo separation.

Some of our best moments with the SoundLink Mini came from the most simple of recordings. We couldn’t seem to get enough of The Freewheeling’ Bob Dylan. Tracks like “Masters of War” and “Down The Highway”, were produced with a warm, smooth midrange, and vivid upper register detail.

The record’s thick tape hiss was luminously revealed, and subtle details like microphone pops and pick clips jumped out at us. Bob’s harmonica was probably our favorite element, singing over the rich upper midrange with clear, dynamic swells.

We also really dug more gritty tracks like “Gold on the Ceiling” from the Black Keys. While the kick drum was a little heavy, the speaker carved out the angry buzzing of the fuzz-bass and reedy synths with urgent force, while vocals rang clear and full over the top. The guitar was cast with a tight, course timbre, and an impressive range of dynamic expression. We had similarly exciting rides through many other rock tracks. David Bowie’s “Golden Years,” was especially memorable, reproduced with a fat, creamy color to the clavinet and drummer’s toms at the entrance, while the percussion and vocals up top were clear, dry, and brilliantly defined.

…the same trait that makes the speaker sound so big occasionally wreaked some havoc.

Unfortunately, the same trait that makes the speaker sound so big occasionally wreaked some havoc. When we auditioned select rock and pop tracks, the bass frequencies seemed to clamor from the speaker with the delicacy of a pack of clowns getting out of a Mini Cooper, resulting in a muddy bass response. The heavy stand-up bass in Nickel Creek’s “Reasons Why”, for instance, was extra boomy, coloring the midrange with a coarse film, as if the mixing engineer forgot about the EQ.

Similar experiences popped up in samples ranging from Dave Matthews to Depeche Mode. At times the treble response provided enough clarity and definition to compensate once it kicked in, possibly invoking a limiter that balanced things out. Still, the overactive pumping tended to bothered us when it cropped up and was impossible to overlook.

If we had our druthers, we would have added an onboard bass EQ option to the SoundLink Mini to allow for varying bass preferences. That said, it is a tiny little speaker, and we have to give it props for matching its rugged power with excellent detail to create an impressive overall sound.

Bose’s SoundLink Mini cuts out the deep features and stylistic extras to provide an attractive, minimalist speaker with a rich and potent sound signature. The speaker got too big for its britches at times, and a little bass control would have gone a long way with us. Still, it succeeded more often than it failed, blending keen detail, wide dynamic expression, and powerful force for an enjoyable sonic experience that extended far beyond its slender form. If big sound in a tiny package is your primary objective, the Bose SoundLink Mini delivers the goods in spades.

Best Projector Deals: Save on Nebula, LG, and more
Best AirPods deals for September 2022: AirPods and AirPods Pro
The best speakers for 2022: great hi-fi options for music and more
The best Roku TVs of 2022: which should you buy?
What’s new on HBO and HBO Max and what’s leaving in October
These giant TVs are all under $300 during this Walmart TV sale
Best Prime Day Deals: What to expect from the October event
Sennheiser Ambeo Soundbar Plus hit by unforeseen technical delay
The best TVs of 2022: our favorites from Samsung, LG, Sony, and more
Apple AirPods Pro 2 vs. Google Pixel Buds Pro
The YouTube watching experience on TVs just got much better
Optoma’s CinemaX 4K laser projectors now have faster response times for gamers
Best Walmart TV deals for September 2022