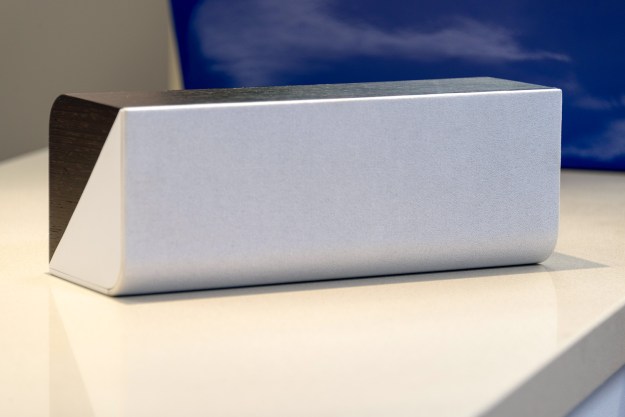 Compared to big names like Bang & Olufsen or Sonos, Wren is a relative unknown in the home audio game. In fact, the whole Wren lineup comprises just two speakers – the V5 and the V3 – in several configurations. We were impressed with the V5 when we reviewed it a few years back, so we took the V3US – the company’s most recent release – for a whirl, and we’re glad we did. The V3US sounds and looks great, offering a classy and convenient way to spice up your listening room. Wren also recently knocked the price down from $399 to $299, bringing it in line with many of our favorite speakers. What’s not to love?

Wren clearly favors function over form when it comes to packaging. The V3US emerges from a white box bearing little more than photos of the speaker and logos representing several supported wireless protocols. The same goes for what’s inside: Apart from a Velcro cloth sleeve and some standard cardboard shells, there’s not much to admire – that is, aside from the speaker, which is quite attractive. Half the rectangular V3US (split diagonally) is clad in espresso-hued wood, while the other half is covered in cream-colored mesh.

Apart from the speaker unit, you’ll just get a power adapter and three separate info booklets (quick start, full guide, and warranty details). This means no USB cable and no auxiliary cable – no big deal, though, since the USB port is service-only and line-in should be a last resort.

Setting the V3US up for Bluetooth use is extremely simple; power on the speaker (you’ll need to plug it in first, of course), then press and hold the setup button until the Bluetooth LED starts to blink amber. Then find the V3US in your device’s Bluetooth menu, and connect.

The Play-Fi app can be a real pain.

Utilizing the speaker’s other wireless protocols is a little more complex. To connect to Wi-Fi, you’ll need to download the appropriate Play-Fi app (DTS Play-Fi on iOS, Wren on Android) and follow the instructions. Unfortunately, this is something of a hassle, as the app will seemingly decide at random whether it wants to recognize the speaker and connect to it. Hit the reset button and rerun the setup process to fix, but the app is still a pain.

Further, we initially had to deal with an annoying high-pitched tone emanating from the V3US while using Play-Fi connection. This turned out to be the result of a Play-Fi app update, according to Wren, fixable via firmware update (link here), which isn’t too complicated. The tone wasn’t an issue while listening via Bluetooth, aux, Spotify Connect, or AirPlay. Wren assured us that all V3US owners have been notified (and that all further models will ship with updated firmware), but the issue is definitely something to consider regarding further Play-Fi updates.

Once connected, you can play music through the Play-Fi app or use Airplay or Spotify Connect by selecting the V3US as you normally would.

Note: Our review model was the V3USP, which also includes a rechargeable lithium-ion battery.

While we characterized the V3US as rectangular, that’s not quite accurate. Like the V5AP, the speaker has two rounded edges, though from the end it appears more square than rhomboid. At 12-inches wide, and 4.5-inches in both height and depth, it’s bigger than Riva’s Arena multiroom speaker, but smaller than the big boys like the Sonos Play:5.

On the top (or the side if you want to use it horizontally, which we preferred) are buttons for power, volume, and input control, including Wi-Fi, Aux, and Bluetooth, represented by LED indicators. The back of the speaker harbors ports for power, aux, and USB input alongside the setup button, the reset button, and the bass equalization toggle.

Inside the cabinet the speaker is extremely well-built, as evidenced by its heft of just over 6 pounds (6.7 with the battery). A braced MDF wood cabinet and 4mm silicone base pads keep the V3US’s innards secure while effectively avoiding the type of unwanted resonance that often plagues less robust plastic speakers. Twin 3-inch drivers, and a front-firing passive radiator provide the V3US with some serious oomph, powered by Class D amplification rated at 15 watts per channel.

As previously mentioned, we reviewed the V3USP variant — now $349, following a price cut by Wren — which has an eight-hour rechargeable battery in case you need to move the speaker away from a wall outlet. In our testing, this number seemed accurate, though at just under 7 pounds with the battery, this isn’t really what we would consider a “portable” speaker anyway.

When it comes to sources, the speaker comes loaded, supporting DTS Play-Fi, Bluetooth (with aptX for highe- quality resolution from supporting devices), Spotify Connect, and AirPlay. It’s your decision which way to go, though some work better than others.

When it comes to music playback, the V3US is a hit – no qualifiers needed

Play-Fi is the only way to enable multiroom functionality on the V3US (it can connect with up to 15 other Play-Fi supported speakers from multiple brands), and, as mentioned above, you’ll need to use Wren’s Play-Fi app to initially connect the speaker to Wi-Fi. But using the Play-Fi apps for either Android or iOS streaming is something of an adventure – and not in a good way. On iOS (iPhone 6), the Play-Fi app constantly encountered errors, skipping around and dropping the signal; performance was a bit better on Android with LG’s V30.

The speaker’s Bluetooth connection was extremely reliable in testing, however, dropping out just once in several hours of listening; AirPlay and Spotify Connect were equally reliable.

When it comes to music playback, the V3US is a hit – no qualifiers needed. Bubbling synths in Blue Scholars’ Cinemetropolis provide a sublime backdrop for MC Geologic’s recognizable rap voice, and the electronic bass in Deadmau5’s Moar Ghosts N Stuff bounces jubilantly without burying the song’s signature synthetic organ. Bass guitar sounds just as good, standing out in classic R&B tracks like Marvin Gaye and Tammi Terrell’s Ain’t No Mountain High Enough and The Jackson 5’s I Want You Back.

Slap on something slower, and the V3US responds in kind. Big KRIT’s Moon & Stars (Remix) balances woozy horns below boom-bap drumsticks, while Outkast’s Take Off Your Cool layers delicate vocals atop soft guitar chords to great effect. Even busier affairs – Foster the People’s Static Space Lover, for instance – are reproduced almost faultlessly, with impressive instrumental separation allowing room for the most minute details to breathe.

Overall, the V3US’s sound signature is extremely warm – similar to the Riva Festival, only with a little less bass — which did become overwhelming at times (the layering in BYU Vocal Point’s arrangement of Danny Boy strained the speaker a bit), and bright guitar triggered some distortion at higher volumes. In general, though, the V3US sounds simply sublime.

All Wren products are protected under a one-year warranty against defects in materials and workmanship. Register the speaker within 30 days of purchase, and the warranty will extend to three years.

The Wren V3US isn’t quite a budget speaker, but it’s worthy of consideration, blending stunning good looks with awesome sound quality inside a compact frame. Play-Fi isn’t perfect (or anywhere near it), but with AirPlay, Spotify Connect, and aptX, there are plenty of ways to rock out. And after dropping in price from $399 to $299, there’s even more reason for you to check out the V3US.

If multiroom audio is your goal,the compact Riva Arena offers great sound for less cash. It might not look quite as sharp, but you won’t have to deal with Play-Fi’s myriad issues. You can also get two JLab Block Party speakers for the price of one V3US. If you’re in search of something with waterproofing, try on Ultimate Ears’ Megablast for size.

Bang & Olufsen’s Beolit 17 is very similar to the V3US, except with a 24-hour rechargeable battery (at the cost of looks, in our opinion), and it costs a bit more. Want a speaker built for a smart home ecosystem? Get two Sonos One multiroom speakers — with Amazon Alexa support built in — for just $100 more than the V3US.

In terms of build quality, the V3US is well-assembled and feels sturdy; we applaud the use of MDF wood in lieu of cheap plastics here. It’s not water- or dust-resistant, though, so try and keep it away from the elements. Whether it ages well could depend on whether or not Wren continues to support firmware updates with software changes. In the case of the Play-Fi issue we encountered, it was an easy fix.

If you’re concerned about ease of use, or if you’re locked into a vast smart home ecosystem, there are more appropriate choices out there. From a style and sound perspective though, it doesn’t get much better than the V3US for just $299.

Update: Wren has lowered the price of the V3US.