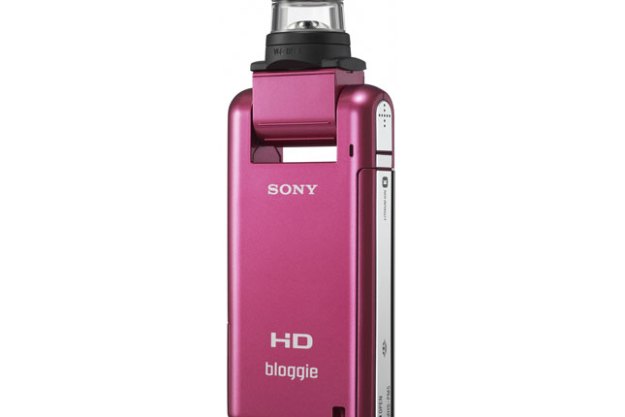 Editor’s note: The ordinary Sony MHS-PM5 retails for $150, while the MHS-PM5K we reviewed retails for $170 directly from Sony with a 4GB Memory Stick Pro Duo card and 360-degree lens.

Panoramas do not have to be frozen in time any more. Sony’s latest pocket camcorder, the swiveling MHS-PM5K, captures a full 360-degree field of view with a simple add-on lens, producing playable panoramas that you can literally look around in as you watch. When you’re done, snap it off and you’re back to shooting true 1080p video. While novel, lightweight and surprisingly affordable at $170 (or $150 for the version without the 360 attachment), we found the Bloggie PM5K can’t match the video quality of many less endeavoring pocket cams.

The Bloggie shoots true 1080p video and 720p video at 60 frames per second, with SteadyShot electronic image stabilization and 4x digital zoom. Those specs put it roughly in league with the likes of Kodak’s Zi8, JVC’s Picsio FM1, and Samsung’s HMX-U10. What sets the Bloggie apart from this growing crowd of evolved pocket cams? A swiveling, top-mounted lens. It faces into the belly of the camera while closed, keeping it protected, then rotates out 270 degrees to shoot forward for normal videos, up for panoramas (not to mention riveting ceiling and sky footage) and back for shooting moody video diaries to put on YouTube.

Sony’s PM5K was designed to inhabit pockets, and it looks the part. Although not quite as tiny as Flip’s MinoHD or Creative’s VadoHD, the 4.25-inch-tall cam can hide completely under Kodak’s bigfoot Zi8, and at only 0.75 inches thick, makes Flip’s other offerings like the UltraHD and SlideHD look positively fat. The all-plastic body also keeps it relatively light, too, at only 4.5 ounces.

Although most competitors have copped Flip’s dead-simple control scheme – a giant record button in the center with directional arrows around it – Sony takes a more traditional digicam approach with the PM5K. A 2.4-inch LCD sits front and center, while the all-important record and snapshot buttons get shoved over to the far right. The thumb naturally gravitates to the middle of the screen when gripping it, making this arrangement somewhat awkward unless you want to use two hands. Around the corner, an exceptionally flimsy feeling zoom slider lets you glide through different levels of the 4x zoom. Below the LCD, you’ll find typical playback and menu buttons, plus a five-way directional nub.

Sony’s bundle includes the usual protective pouch and lanyard, plus two welcome extras: RCA output cables and a short USB extension. The RCA cables make a nice touch for sharing videos (although HDMI would really be ideal) and the USB extension is a near necessity, considering the Bloggie’s rigid USB connector doesn’t pivot the way some other cams’ do. Of course, the PM5K package also includes the 360-degree lens.

Shooting and Watching in 360 Degrees

From a hardware perspective, there’s not as much to Sony’s 360-degree wizardry as you might think. It’s all in the optics. A snap-on lens shaped like a bottle cap captures light from all directions and funnels it into the image sensor, producing a ring-shaped video that’s almost dizzying to look at prior to conversion. After dumping this unwieldy donut of footage to the computer, software “unwraps” it into an extremely wide strip of video that you can scroll left and right through to simulate looking around.

Watching 360-degree footage feels like getting carried around in a hamster cage and looking out a webcam. A webcam from 1998 that is. You can’t look up or down to any degree, you get bounced around a lot, and the quality is atrocious. After testing it in the office, it was actually bad enough that we had difficulty telling which room we were in on playback. Sharing the panoramas is also problematic because viewers will need Sony’s Picture Motion Browser software to “navigate” them. It’s also worth noting that the “unwrapping” software uses some serious computational grunt to produce the panoramas, so you’ll need to devote some serious time to let it crunch pixels if you shoot a long panoramic video.

Video from pocket cams never approaches the output from optically stabilized, much larger camcorders that cost two or three times as much, but they typically provide high-quality footage that’s impressive relative to their size and price. The PM5K delivers acceptable video on par with many of its peers, but suffers from many of the same flaws, too.

The motion blur that plagues this class of camcorder is just as pronounced on the PM5K as on Flips’ MinoHD, Creative’s VadoHD or Kodak’s Zi8, but we noticed a another issue, too. Panning the camera quickly seems to warp straight edges, creating almost a whiplash effect known as “rolling shutter.” A vertical object in the frame – like a column – will appear to warp and tilt during a quick turn. All CMOS devices suffer from this effect to some degree, but Sony’s seems to be one of the only ones that demonstrated it in normal use.

Low light performance on the PM5K is particularly abysmal. Stepping into a dim room feels like stepping into the slow motion jutter of a strobe light, as the camera’s sensor drops exposure time dramatically to compensate. Other cams do the same, but manage to maintain fluid video. Even with a still shot, the blocky, poorly exposed image still lags well behind what other cams manage to do with the same lighting.

Even with good indoor lighting, video from the PM5K looks hazier in comparison to the 1080p output from Kodak’s Zi8, and even 720p output from Flip’s SlideHD and Creative’s VadoHD, with fuzzier details and more muted, inaccurate colors. Fluorescent lights, especially, seemed to throw the PM5K for a loop, making scenes look dingy and yellow.

Oddly enough, the PM5K has been capped at 29 minutes of recording, which can become a major nuisance if you’re attempting to record a longer event, like a concert, without interruption.

Shooting videos in 360 degrees just doesn’t pan out the way we hoped it would, and the regular performance of the PM5K doesn’t provide much to make up for it. Even if you discount the 360-degree capabilities completely by going with the $150 PM5 model (which includes no add-on lens), the $180 Zi8 mops the floor with it on image quality for only a little more. Small size and a swiveling lens just don’t make up for major drawbacks like awkwardly placed controls, capped recording times, and subpar image quality. Although Flip’s MinoHD shoots better looking video, the PM5K can handle 1080p, offers a much lower price, and accepts SD cards, substituting some versatility and practicality for quality.

Topics
Video-editing app LumaFusion to get a Galaxy Tab S8 launch
HP unveils new IPS Black monitor with one key new feature
New VESA display standard makes it easier to pick a monitor
Dell could be working on the same charging tech Apple has been developing
This throwback mini computer puts a Windows 11 PC in your pocket
Returnal might be the first PC game to recommend this much RAM
Best Samsung Galaxy Note 20 deals for December 2022
Bad news: AMD may have launched RDNA 3 before it was quite ready
Microsoft Teams Premium uses AI to automatically recap your meetings
Intel’s upcoming laptop CPU may destroy even the best desktop chips
Boston Dynamics’ festive robot video has a surprise ending
Overclockers surpassed the elusive 9GHz clock speed. Here’s how they did it
Amazon starts drone delivery trials in California and Texas