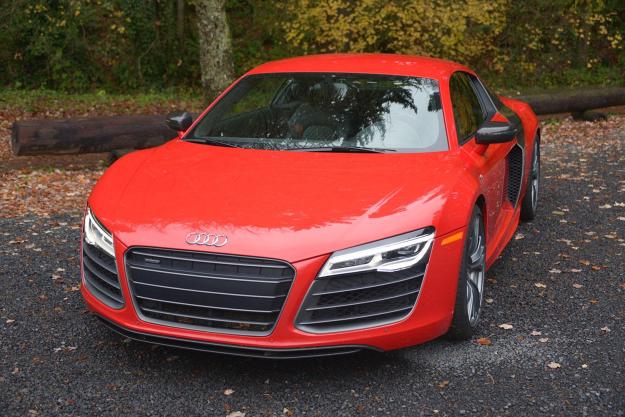 Sure, if pushed, I’ll dance. I’m not one of those guys who’s afraid to dance. I simply get nothing out of it. I’m tall, lanky, and my body movements are anything but fluidic.

When I do dance, however, I dance like a drunken dad at a wedding. I can do the twist, the mashed potato, and the Elaine Benes. Neither onlookers nor I will enjoy it.

When Audi called to offer me the R8 for the week, I danced.

That said, when Audi called to offer me the R8 for the week, I danced. I got up from my desk in front of the entire Digital Trends Editorial team and danced.

I wiggled and gyrated with pure joy, as the R8 is one of those magical cars I never imagined I’d ever drive.

When people at dinner parties hear that I’m an automotive journalist, more often than not, the first question they ask me is whether I’ve driven the R8. Sadly, the answer had – until last week – always been, “No.”

Now, however, I’m be able to chuckle, shyly look down at my shoes and admit that, yes; I have in fact driven the R8.

I am jumping ahead of myself, though. At this point in our story, I’d not yet driven the R8.

Just as good seen as it is heard

There was construction going on in front of the Digital Trends office the day the R8 was delivered, so I had the man bring it to my downtown loft. I was upstairs on the computer working remotely when I heard the unmistakable roar of a V10 ripping past my building.

Without hesitation, I ran downstairs and was greeted by a bright red 2014 R8 V10 fitted with the Carbon package. I stood there as the deliveryman climbed out and handed me the paperwork to sign. Within moments, a crowd began to gather.

This was the beginning of a common occurrence, I found. People flock to the R8 unlike any other car I’ve ever driven. Where the Nissan GT-R drew the adoration of blue collar 20-somethings and ne’er-do-wells, the R8 attracted the eyes of all walks of life.

Tweens forced their mothers to pull the minivan over so they could Instagram the R8. Middle-aged women pointed and hooted at the R8. And the jaws of the elderly dropped wide open, as the R8’s boisterous V10 restarted their eardrums.

People flock to the R8 unlike any other car I’ve ever driven.

Perhaps my favorite interaction spurred by the R8 occurred right after it was delivered. I was driving to the office through downtown Portland. Mostly in first gear, with the Sport mode exhaust baffles wide open, I was clearly challenging unmuffled engine braking laws. That was, until a motorcycle cop raced up on my tail and lit me up.

I quickly pulled over. Confounded as to why I was being pulled over, I stammered, “What seems to be the problem officer?”

After going through the regular rigmarole, and explaining the nature of my job, the officer eventually asked me for a business card along with my license. And after he radioed in to make sure I didn’t have any warrants out for my arrest, we talked track-day excursions.

Over the 20 or so minutes we chatted, passersby scoffed at me, the guy pulled over in a red R8. If only they had known the bright red $190,000 German supercar surrounding me attracted not a citation but rather a new law enforcement friend.

The R8 V10 certainly made for a very distinctive social experience. Delightfully, it was an auditory and kinesthetic experience as well.

The 2014 R8 V10 S tronic is powered by a Lamborghini-sourced 5.2-liter V10 that produces 525 horsepower and 391 pound-feet of torque. This mid-mounted wedge of Italian torques is bolted to Audi’s S tronic seven-speed dual-clutch transmission, which replaces the outgoing R tronic dual-clutch.

While reviewers derided the outgoing R tronic transmission for shifting too slowly, the exceptionally swift S tronic solves all those lag-y shift issues and routes power in a business-like manner to all four wheels through the infamous Audi quattro all-wheel drive system. Although it clocks in at 3,800 pounds, the R8 V10 will hurl itself to 60 mph from a dead standstill in 3.4 seconds and onto a top speed of 195 mph.

I’ve driven several supercars, but none provided the same experience as the R8. The Noble M400 I drove several years ago was just plain scary. The GT-R might be faster than the R8 V10 but not in a real, day-to-day useable way. And the Mercedes SLS AMG Black Series was incredible but still difficult to master. Not to mention the Benz is $100,000 more than the R8 V10.

Separating itself further from the rest of the supercar market, the R8 boasts a simply cavernous interior – especially for its size. In the SLS Black, I was wanting for space in virtually every direction. In the R8, though, I could find the perfect driving position and remain comfortable for hours on end.

I’ve driven several supercars, but none have provided the same experience as the R8.

My favorite bit of all about the R8 V10 was its steering and handling. I can’t recall the last time I drove a mid-engine, all-wheel drive supercar. It’s a very distinctive sensation.

In the straights, you won’t notice the engine placement. Come into a corner hot, though, and suddenly weight distribution and drive torque become exceptionally apparent, as negative torque-steer comes alive. You don’t notice how much pulling the front wheels are doing until you give them a break. It doesn’t get scary or throw you off. The vehicle trajectory just slightly changes at the apex, when you come off the throttle.

In the GT-R, you’re fighting every moment you’re behind the wheel, fighting to keep it straight or fighting it to turn. In the R8, you don’t feel like you’re always in control, which you are, but that the car is even more in control.

I imagine this is a feeling much like some religious types feel during encounters with the Almighty. You don’t sweat the small stuff anymore. “Don’t worry, I’ve got this,” the R8 seems to say, as it remains firmly planted in every corner and rolling roadway you can toss at it.

When you don’t want to choose every gear yourself and you don’t want to hear the growl of a mighty V10, you can turn off Sport mode and put the S tronic into automatic with a simple click to the left. You’ll suddenly find yourself cocooned in the most comfortable, confident coupes that money can buy.

Even cars like the Bentley Continental GTC, for my money, don’t have anything in terms of aplomb and gravitas. People still look at you in normal drive modes. But when you don’t want to feel showy, at least on the inside, you don’t have to.

“No problem,” I thought, “I’ll just plug my phone in with the USB cable.” I opened the hatch-y area to find a proprietary USB plug with a 30-pin Apple connector attached. I was flabbergasted.

This, I fear, is a serious shortcoming for the R8 – at least for my generation. Where the rest of the Audi line is light years ahead of the pack, its flagship is behind the times of even your most basic Mazda3.

Take into account all the bits, ignoring the missing Bluetooth streaming, and the R8 V10 S tronic easily shoots to the top of my all-time favorite car list.

It’s shout-y and showy enough – especially in red – to attract attention. But it’s not like a Lamborghini, which evokes anger from passersby, or dorky like a Ferrari.

Instead, people are proud of you; they’re happy for you. They wave and want to be your friend, as they snap a picture of you and your car with their smartphone.

When you’re out of the city and out in the open country, you become your own driving hero, as you smoothly execute perfect turns and achieve break-neck straight away speeds – all with a howling V10 right behind your right ear.

Perhaps there’s another, deeper reason I feel so infatuated and connected with the R8, though. Other cars with similar power are always, for one reason or another, dancing and jitterbugging down the road.

Just like me, however, the R8 refuses to dance. It doesn’t get anything out of it. And maybe that’s why I love it so much.

2022 Rivian R1T first drive review: The first EV pickup sets a high bar
2021 Mercedes-Benz S-Class first drive review: Titan of tech
The Sonos-Audi partnership isn’t as exciting as we’d hoped
Amazon Music now has a car mode, but don’t use it while driving
Jeep is launching its first two electric SUVs in the U.S. in 2024
2024 Chevrolet Equinox EV aims for affordability with $30,000 base price
Cruise’s robot taxis head to Arizona and Texas
Uber says it’s investigating ‘cybersecurity incident’
Nvidia’s Drive Concierge will fill your car with screens
The Uber hack is an outrageous tale of a teen hacking for fun
Tesla to fix window software on 1M of its U.S. cars
Lux and refreshingly livable, Mercedes’ EQE moves EVs mainstream
How to watch Tesla’s AI Day tonight and what to expect