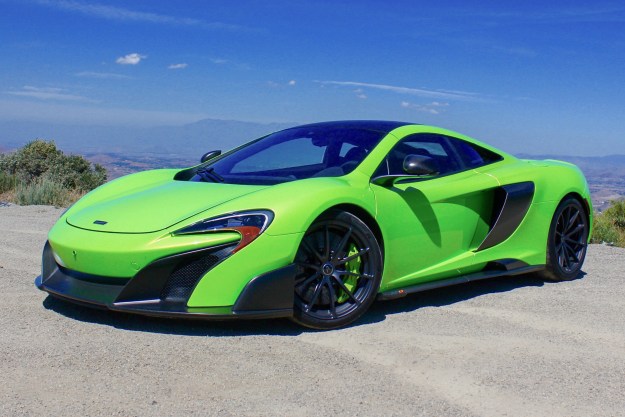 “McLaren’s 675LT is blazing fast, and offers the ultimate in elite performance.”

Left foot pressed hard on the brake, I tab the “active” button on the center stack before locating the neighboring “launch” icon. “Waiting for full throttle,” reads the driver display. Obediently, I plunge my right foot into the accelerator while my left foot hesitates on the brake.

A split second later, I’ve abandoned the brake as if it’s diseased, engaging the McLaren 675LT in a fleeting moment of calculation before rocketing into the horizon. I’m discovering a new, frightening definition of fast as the Long Tail shows off its 2.8-second sprint to 60 mph.

The science of supersonic

Once my leg finally stops shaking, I begin to process my introduction to McLaren’s race-bred creation. I’ve been fortunate enough to drive some rather rapid vehicles over the years: Vipers, Corvette Z06s, Aston Martins, Hellcats, Lamborghini Aventadors…you get the idea. Mortal man wouldn’t hesitate to call these cars brutally quick. However, McLaren’s 675LT plays in the deep end of the pool while mere performance cars, even 600+ horsepower ones, are splashing around in the shallows.

Supercar swimmers distinguish themselves from lesser vehicles not simply with more power but with abounding ultra-light construction materials, active aerodynamics, tenacious brakes, minimalistic cabins, and exceedingly complex suspension systems. In the case of the 675LT, McLaren started with the already sophisticated 650S and set about removing 220 pounds from its figure, overhauling more than 50 percent of its engine internals, and lengthening its body by 1.5 inches.

The Pirelli tires, P1 suspension, and demi-ton of downforce drag the 675LT through a curve like a toddler applying his heavy hand to a Hot Wheels car

To comprehend the micro precision with which McLaren’s engineers approached the LT, which traces its roots to the F1 GTR Long Tail made in the ‘90s, let’s review some of the specific differences between the limited edition and its donor car. In terms of weight reduction, the LT uses carbon fiber body panels, less sound deadening material, a fixed polycarbonate (“racing plastic”) engine cover, Alcantara interior (replacing leather and carpet), a marginally thinner windshield and rear glass, and even a lighter-weight paint coating.

Combine these measures with an extra dollop of power – for a total of 666 devilish horses and 516 pound-feet of torque – and the supercar is primed to embarrass damn near everything in its $350,000 price bracket, and that’s before you even get to a corner.

As thrilling as it may be to launch McLaren’s 675LT again and again, molding your back into the aggressively tight carbon fiber shells before testing the seatbelt tensioners under hard braking, that low-slung body begs to be ripped around a curvy road.

Knowing just the spot, I flipped the suspension and powertrain management module over to “Track” for a few runs up my deserted proving ground. As the Pirelli P Zero Trofeo R tires warmed, I worked my way through the LT’s seven-speed dual-clutch transmission, which runs to higher gears post-haste in automatic mode, but can be controlled manually at the pull of a paddle.

With an 8,500-rpm rev range, McLaren’s super coupe doesn’t mandate as many shifts between corners on the track, and on a tight mountain road, it’s quite the task to approach redline. Tires up to temperature, I angle the 675LT into a bend, exercising the quickest steering rack McLaren has ever fitted to a road car, including the automaker’s vaunted P1.

Suddenly, my prized hill climb road doesn’t seem like the arbiter of body roll and tire punishment I once esteemed it to be.

What happens next is perceived from eyeballs that are moving uncomfortably in their sockets. The suspension system that was merrily coasting over imperfect roads moments ago has hunkered down to furiously dampen the chassis at towering speeds. The barely-legal Pirelli tires work in tandem with the P1-derived suspension and demi-ton of downforce to drag the 675LT through a curve with as much traction as a toddler applying its heavy hand to a Hot Wheels car. That back end isn’t going anywhere – unless you neglected to properly heat those tires.

Corner after corner, the McLaren takes all I dare to dish it without so much as a whisper of broken friction. Suddenly, my prized hill climb road doesn’t seem like the arbiter of body roll and tire punishment I once esteemed it to be.

Here’s the part of the review where I completely restructure the image I’ve just created. If I stopped here, you might assume that the McLaren 675LT is a vicious, brain-rattling facilitator of speed, which of course it is. However, for 90 percent of my time spent in the cockpit, I was just as flabbergasted by the supercar’s supple ride as I was by its monumental performance capacity.

A few things play into the LT’s road manor. Of course, its sophisticated suspension calibration, despite being 27 percent stiffer in the front and 63 percent stiffer in the rear, is to credit for massaging rough roads into benign bumps, but the powertrain is also a factor. Though the 675LT has the ability to spool its turbochargers in no time, when the car is running in its “Normal” drive mode and the computer is managing gear changes, power delivery is as tame as a midsize sedan. If you’re in a hurry, just keep the tach hovering somewhere above 3,500 rpms, but otherwise the LT won’t bite your head off, even if you abruptly dig into the throttle.

Though most performance cars draw the attention of at least a few passersby, a bright green McLaren has a magnetic effect on the chins of all.

There’s no getting around low profile tires and single-piece sport buckets, yet seven of the 10 different passengers who went along for joyrides in the 675LT, without any provocation on my part, remarked that the ride quality was sublime. As for the other three, as soon as I inquired about their comfort, they were quick to praise.

Then there’s the noise. Despite making due without much in the way of decibel reduction, the cabin’s noise level is more group chat than it is frat house fiesta. At low speeds, the V8 almost sounds like a diesel, softly whistling and humming along. As the revs climb, the note transforms to a throaty bellow, but never so loud as to silence the car’s occupants (sheer velocity takes care of that). If you crave more volume, I’d suggest lowering the windows — especially if, like my tester, the A/C was removed at the factory.

Apart from performance chops, supercar buyers care most about design. Though McLaren’s Super Series has never won me over from the front end, every other angle on the McLaren is sleek, albeit a tad understated. Since I first glimpsed the Long Tail in pictures, I was obsessed with the robust, center-exit exhaust ports, each baked into a meshed rear panel. In the metal, the rump is even more becoming. Most performance cars draw the attention of at least a few passersby on a given jaunt, but a bright green McLaren has a magnetic effect on the chins of all. While many haven’t a clue at what they’re looking at, they know it’s special, and that’s enough.

Does the relatively plush ride and computer-actuated handling precision mute the “drama” associated with elite performance machines? A bit, but in the alternate universe where I could afford something so exquisite, I’d quite like to drive it more than once in a blue moon, and knowing I wouldn’t need a chiropractor on speed dial.