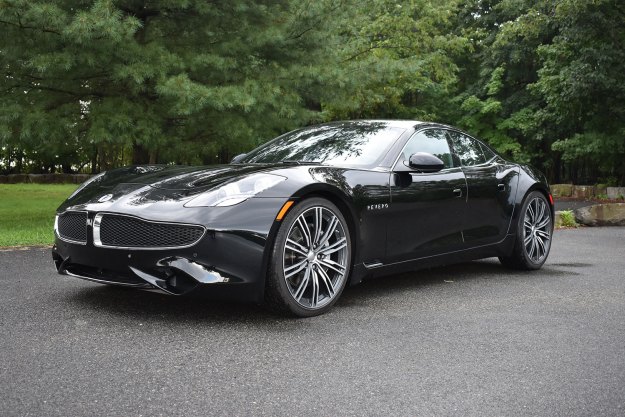 “The Revero may be an old car, but it feels brand new.”

This car may look familiar. It was launched in 2012 as the Fisker Karma, and about 2,000 were built before the company that made it, Fisker Automotive, went bankrupt. Chinese auto-parts conglomerate Wanxiang purchased the remains of Fisker in 2014, reconstituted them into Karma Automotive, and put the former Fisker Karma back into production under the name Revero. Still with us? Good. During our Karma Revero first drive review, we finally got to meet it.

As if that weren’t confusing enough, Henry Fisker, the man who designed the car and founded the original company, has a new company called Fisker, which is marketing a new electric car. He’s also involved with VLF, a company formed to repower old Fisker Karmas with Corvette V8 engines. Note that these enterprises aren’t related to Karma Automotive or the Revero in any way.

When it was launched as the Fisker Karma, this car was in many ways a rival to the Tesla Model S. Like the Model S, it was meant to make green technology exciting, and to serve as the springboard for future mass-market models. But Karma Automotive is taking things in a different direction. It views the Revero as a luxury car that just happens to be electric, and is aiming for low production volumes and a high level of exclusivity, along the lines of Rolls-Royce or Bentley.

The overall design and powertrain are virtually unchanged from when this car launched as the Fisker Karma five years ago. That said, Karma Automotive has made some changes in key areas.

The 20.8-kilowatt-hour lithium-ion battery pack has about the same capacity as the Fisker-era pack, but it features new battery-cell chemistry. Karma also switched to a new computer control system. The Revero features DC fast-charging capability and a built-in 4G LTE connection that allows Tesla-like over-the-air software updates. Neither of those features were available before.

In addition to the hardware changes, Karma introduced a new palette of exterior paint colors and interior trim options.

The Revero is only available in one trim level, and with one powertrain. The only major options are paint colors, interior trim, and wheel designs, so the ordering process is much more about aesthetics than anything else. The car’s base price is $131,400 (including destination) and Karma claims pricing maxes out at $139,500 with all options selected.

The Revero remains one of the most striking vehicles on the road.

It may be five years old, but the Revero remains one of the most striking cars on the road. It’s so heavily stylized that it looks like a rendering of a car, not one you can actually get in and drive. If you’ve ever been to an auto show and daydreamed about driving one of the sleek-looking concepts straight off the stand, this is the car for you.

From its long hood, to its low roof line, to its wide stance, the Revero has virtually ideal proportions. Its curvaceous fenders only add to the appeal. The grinning mouth of a grille is admittedly a bit odd, but at least it gives the car a distinct appearance.

The Revero’s infotainment system is a study in contradictions. On the one hand, Karma took the fashion-forward approach of making the driver rely on a central touchscreen for nearly all functions. But the number of features available is fairly limited.

The interface consists of a 10.2-inch touchscreen display and a 12.3-inch digital instrument cluster. Navigation maps are crisp, detailed, and make good use of contrasting colors. The climate control screen uses large graphics and text, making it easier to read. But the most amusing part is the display that shows the flow of energy between the engine, electric motors, and the road using gestural slashes of color.

The touchscreen interface works well enough, but we’d prefer some backup analog buttons or knobs, which tend to be easier to use while driving. While other cars in this price range deluge drivers with features, the Revero is pretty basic even by the standards of more mainstream cars. You get audio, navigation, Bluetooth, climate control, and that’s about it. Apple CarPlay and Android Auto are notably absent.

There’s something to be said about a car that doesn’t overwhelm you with tech features, but buyers at this price point may expect more. The same issue applies to the seven-speaker audio system, which is by no means deficient in terms of sound quality, but simply can’t compete with the more elaborate systems available in other luxury cars.

A common complaint in reviews of the old Fisker Karma was poor interior quality, but this seems to have been addressed in the car’s reinvigoration.

There’s something to be said about a car that doesn’t overwhelm you with tech features, but buyers may expect more.

Everything looks well put together, and Karma kept some of the Fisker-era interior features that actually worked. The reclaimed wood trim, for example. It looks more like real wood than the overly varnished trim pieces used by some other carmakers, and adds to the Revero’s green street cred.

The interior looks like it was designed for a science fiction movie. Instead of a conventional shifter, a series of buttons are clustered together in a diamond-shaped hump that rises from the center console, which also features an odd transparent box that could either be a piece of contemporary art, or part of a flux capacitor.

While the design certainly catches your eye, the interior falls short when it comes to ergonomics. Controls are in odd places (mirror adjustment is in a corner of the door, window switches are on the central console) and an unfortunate byproduct of the sleek exterior styling is a fairly cramped feel inside. The rear seats in particular have an inadequate amount of legroom, and rear visibility is poor.

The Revero uses an extended-range electric powertrain, with two electric motors actually propelling the car and a 2.0-liter turbocharged four-cylinder gasoline engine (sourced from General Motors) serving as a generator. The two motors send a combined 403 horsepower and 918 pound-feet of torque to the rear wheels. This setup gives drivers the flexibility to use the Revero like an electric car, without having to worry about range anxiety.

The Revero has an EPA-rated 33-mile electric range, with 240 miles of range on both gasoline and electric power. Karma believes the car will exceed those ratings in the real world.

While the Revero doesn’t have a transmission, it does have paddle shifters. One controls the three driving modes: “Stealth” (all electric), “Sustain” (which holds the battery charge for later use), and “Sport” (self explanatory). The other lets the driver toggle between three levels of regenerative braking.

On the lowest setting, the Revero behaves pretty much like a regular car. On the highest setting, it decelerates appreciably as soon as the driver lifts off, allowing so-called “one-pedal driving,” which hardcore electric-car fans tend to prefer.

Karma quotes a best 0 to 60 mph time of 5.4 seconds in Sport mode, along with a quarter-mile time of 14.5 seconds at 93 mph. On a drive through Manhattan and up the scenic Palisades Parkway along the Hudson River, the Revero felt decently quick, but definitely not sports car quick. The instant torque of its electric motors makes exploiting gaps in traffic a breeze, but pushing hard wasn’t very rewarding.

The Revero makes a pretty good luxury cruiser, at least. It’s incredibly quiet, even with the gasoline engine running. The suspension soaked up bumps and expansion joints on the George Washington Bridge easily. The only real issue when it came to refinement was a shuddering sensation when the car pulled away from stops.

National Highway Traffic Safety Administration (NHTSA) and Insurance Institute for Highway Safety (IIHS) crash ratings for the Revero aren’t available at this time. Electronic driver aids are limited, although the Revero does feature lane departure warning and a noisemaker to alert pedestrians at speeds up to 28 mph.

The 2018 Karma Revero is a stylish car that offers zero-emission driving with the flexibility of a backup gasoline generator. That makes it a great option for buyers who want to save the environment, take long road trips, and look good doing it.

On the other hand, the Tesla Model S is now available with up to 335 miles of range, making range anxiety less of an issue. The Porsche Panamera 4 E-Hybrid can drive on electric power for limited distances, and with better performance to boot. And if you don’t care about electric driving, the Maserati Quattroporte offers similar levels of style and exclusivity in a four-door package. Plus, all of those cars are from more well-known and established brands.

The Revero is a car for people who want something different, and are willing to compromise for it. If you value style and exclusivity over practicality and branding, this is the car for you.

Check out Spectre, Rolls-Royce’s first all-electric car
2023 Kia Niro EV first drive review: Practical doesn’t have to bore you to tears
Nissan wants the 2023 Ariya to be its comeback EV, but the bar has been raised
Elon Musk reveals first delivery date and customer for Tesla Semi truck
Jeep is launching its first two electric SUVs in the U.S. in 2024
2024 Chevrolet Equinox EV aims for affordability with $30,000 base price
Cruise’s robot taxis head to Arizona and Texas
Uber says it’s investigating ‘cybersecurity incident’
Nvidia’s Drive Concierge will fill your car with screens
The Uber hack is an outrageous tale of a teen hacking for fun
Tesla to fix window software on 1M of its U.S. cars
Lux and refreshingly livable, Mercedes’ EQE moves EVs mainstream
How to watch Tesla’s AI Day tonight and what to expect