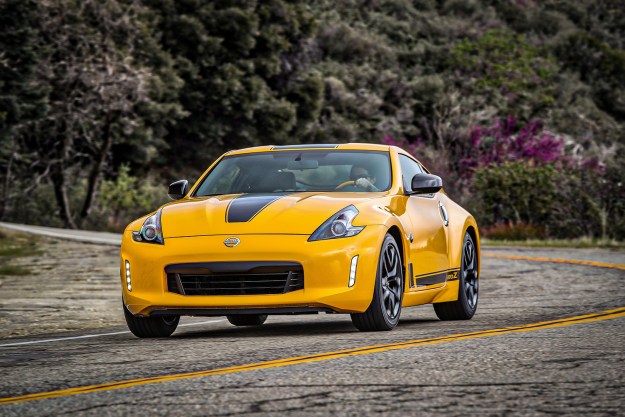 The word “icon” is thrown around a lot when it comes to cars, but Nissan’s Z-car truly deserves the term. The 2018 Nissan 370Z is their heir to a legacy that dates back to the 1970 Datsun 240Z, which helped save the small, affordable sports car during the dark days of the 1970s.

But Nissan may be spending too much time looking back, and not enough time looking ahead. The current-generation 370Z debuted roughly a decade ago, making it positively ancient by industry standards. So can Nissan’s sports car still prove its worth, not to mention measure up to competitors ranging from the small and sprightly Mazda MX-5 Miata (AKA Fiat 124 Spider) and Subaru BRZ (AKA Toyota 86), to the more muscular Ford Mustang, Chevrolet Camaro, and Dodge Challenger, all affordable two-door performance cars that sit in its price range?

To find out, we took to the streets of California in a 2018 370Z Heritage Edition coupe. The mostly-cosmetic Heritage Edition package adds $790 to the $29,990 starting price of the base six-speed manual 370Z, for a total of $30,780. Nissan also offers Sport, Sport Tech, Touring, and NISMO trim levels, with latter topping out at $47,090 with the optional seven-speed automatic transmission. A 370Z Roadster convertible is available as well.

The 370Z has been on sale for a long time without major changes, and it shows. The interior is full of the kinds of hard plastic trim pieces automotive journalists love to complain about, and that have been banished from the cabins of most other production cars over the past decade. At least our Heritage Edition test car was livened up a bit by yellow trim to match the Chicane Yellow exterior. The cloth seats were also comfortable, and featured enough bolstering to keep the driver in place while slinging the 370Z around an autocross course.

Instrumentation is fairly basic by current standards. Our lower-level test car didn’t even have a touchscreen (other trim levels get a 7.0-inch screen with navigation and rearview camera), let alone Apple CarPlay or Android Auto. In a sports car ostensibly built purely to enjoy driving, we actually found the lack of distractions quite refreshing. But buyers prioritizing in-car tech will have to look elsewhere.

The interior is full of the kinds of hard plastic trim pieces automotive journalists love to complain about.

For a two-seat sports car, the 370Z is decently roomy.  It offers slightly more headroom, legroom, and hip room than the Subaru BRZ and Toyota 86 coupes, although those twins do offer a fraction more shoulder room. The Subaru and Toyota also offer small rear seats, but they’re really only suitable for children or cargo.

The 370Z and BRZ/86 twins offer the same 6.9 cubic feet of cargo space, but the Subaru and Toyota offer more with their rear seats folded. The Z’s cargo area is also very shallow, making it hard to store a decent amount of stuff without blocking rear visibility, which is already compromised by high body sides. While philosophically different, the Ford Mustang, Chevrolet Camaro, and Dodge Challenger also offer two-door looks and sporty character, with more cargo space and rear seats that may be tolerable for passengers on short trips.

You don’t buy a sports car for its cargo space and luxuries, though. You buy it for the way it drives. From autocrossing in an abandoned shopping center that often doubles as a movie set to blasting along Los Angeles’ famous Mulholland Drive, our time with the 370Z had a definite Hollywood theme, and Nissan’s sports car was perfectly cast in the leading role of this movie.

At this price, buyers typically have to choose nimble handling in the form of the BRZ/86 and Mazda MX-5 Miata/Fiat 124 Spider twins, or raw power in the form of the Mustang/Camaro/Challenger trio. But Nissan tried to split the difference with the 370Z.

The Nissan’s V6 sends its power to the rear wheels through a standard six-speed manual transmission, or optional seven-speed automatic. We sampled the manual, which gets a new Exedy clutch for 2018 that Nissan claims improves feel. Clutch modulation was indeed pretty smooth, and the shifter had nice, short throws, if a bit imprecise. Nissan also offers SynchroRev Match, which blips the throttle to smooth out downshifts.

The driving experience is pure sports car, with quick steering, minimal body roll, and snappy acceleration. The Z isn’t quite as athletic as a Miata, but it can also power out of corners a lot faster. The downside is a stiff ride that introduces lots of vibration into the cockpit. Granted, that’s typical sports-car behavior as well.

The 2018 Nissan 370Z coupe gets an EPA-rated 21 mpg combined (18 mpg city, 26 mpg highway) with the manual transmission. Automatic models improve by 1 mpg in the combined and city categories. As a low-volume sports car, the 370Z is not rated on the National Highway Traffic Safety Administration Five-Star or Insurance Institute for Highway Safety crash-test scales.

Nissan offers a three-year/36,000-mile basic warranty and five-year/60,000-mile powertrain warranty on the 370Z. Based on past model years, Consumer Reports gives the 2018 370Z a predicted reliability rating of “Average.”

With 332 hp for just under $30,000, the base 370Z is in the sweet spot when it comes to value, and it offers the purest driving experience. But the base model doesn’t offer much in the way of tech, so we could consider going to the opposite end of the spectrum: the fully-loaded 370Z NISMO Tech.

At a starting price of $45,690 with the six-speed manual, this model gets a standard 7.0-inch touchscreen, navigation and a Bose audio system with active noise cancellation to dial out undesirable sounds. The NISMO also gets a bump of 18 hp and 6 lb-ft of torque, for 350 hp and 276 lb-ft in total, plus sportier exterior and interior styling elements.

The 2018 Nissan 370Z is an automotive fossil. That means it’s not quite up to current standards when it comes to tech and refinement, but the all-important old school driving experience has been preserved like a mosquito in amber. Despite its faults, the Z should definitely be on the shopping list of any serious sports-car buyer.