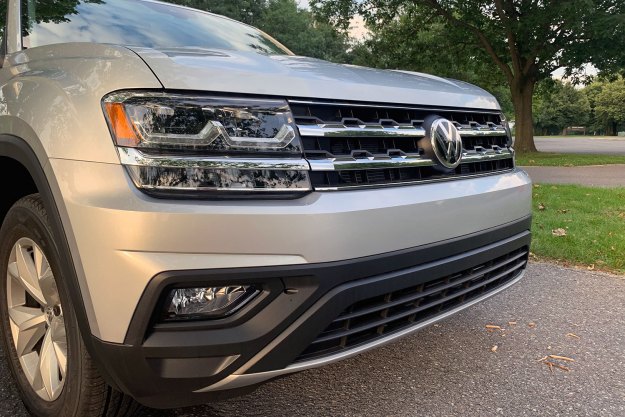 “The Volkswagen Atlas plays it safe, and the result is a capable but generic crossover.”

It’s great to see Volkswagen design a vehicle for the American market, and the Atlas crossover is just that. Gone are the smooth lines of Touaregs past: The harder lines of the 2019 Atlas give it a more aggressive and masculine appearance.

Finally, the top of the line SEL clocks in at a starting price of $42,390 for the FWD model and $44,190 for the AWD. All in all, the Atlas is competitively priced at all trim levels.

We opted for the SE with Tech and 4Motion for its mix of affordability, feature set, and a decent amount of tech inside. As tested, this model has a starting MSRP of $40,090.

No, really. Cover the Volkswagen logo and you might think the Atlas was made by someone else. The hard lines and boxy shape are a sharp departure from the rest of the VW lineup. But look at its competitors here in the states, especially the Ford Explorer. It’s almost like Volkswagen tried to build its own Ford with the Atlas.

The front and rear of this car is chrome-heavy, with a larger front grill than we saw on its predecessor. But unlike the Touareg, the front fascia looks more truck than car-like. This gives the Atlas the optical illusion of looking wider and larger than it is.

Inside, the Atlas is roomy, but we wouldn’t call it luxurious. Here’s where Volkswagen’s European sensibilities come back in full force. The interior is pretty basic, save for the touchscreen infotainment display — but even that’s hobbled (read on to find out how). But those crafty Germans have thought of everything, including adequate legroom and headspace, easy access to third row seating with a fair amount of legroom, and a total of 17 cupholders (no, really).

There’s a whole lot of plastic in the interior, making it feel a bit cheap, and most exterior color options will come with Black Leatherette (Shetland Leatherette — a beige color — is optional on a few paint options). With so much black everywhere, the interior feels a bit unimaginative, but this is a Volkswagen and interiors are not their forte. Volkswagen really played it safe here. But we question whether it’s too safe.

As an aside, our informal poll of those who recently bought or were in the market for a crossover found that the interior design was one of the biggest reasons why these buyers were turning elsewhere after seeing the Atlas. Volkswagen might want to glam up the interior somewhat in future model years to reverse this reaction.

Great safety tech, but why no navigation in the SE?

New for 2019 is a standard safety package across all trim levels, something VW has done across many of its higher-end models this year. Every model now gets blind spot monitoring, rear cross traffic alert, heated exterior mirrors, rain-sensing windshield wipers, forward collision warning, pedestrian detection, and automatic emergency braking.

It’s great to see Volkswagen finally design a vehicle for the American market, and the Atlas crossover is just that.

The SE model adds three-zone climate control and remote start, while the SEL adds VW’s digital gauge display. In the SE and higher trims you also get the 8-inch touchscreen, which we’d certainly recommend. But here’s the odd thing — while you’ll get the same radio in the SE and SEL trims,  in the SE you don’t get either Android Auto or CarPlay or navigation, and while the SE with Technology has Android Auto and CarPlay, it still lacks in dash navigation — that’s reserved for SEL trims.

To us, this is a hobbling of a great infotainment display that comes with navigation in SE trims on other VWs. Why you’d make such a decision in a car that’s obviously family trip-ready is beyond us, and bizarre. This is something we’d like addressed in 2020, because it doesn’t make any sense.

It sure drives nice, though

Bizarre trim decisions aside, where the Atlas scores quite well is in drivability. Sure, it’s going to drive like a truck — it’s built like one — but even on rough roads you’ll feel barely a thing. Using sport mode, the steering gets noticeably tighter, and while the pick-up-and-go of the Atlas leaves a little bit to be desired, it makes it feel a little more car-like in its handling.

The comfortable ride extends to a pleasantly quiet cabin, and unless you really put the pedal to the floor, you won’t hear much of a peep from the V6. Step on it though, and that V6 sounds aggressive, yet refined.

There are some negatives, however.

Sometimes the car felt slow to downshift, and acceleration a bit sluggish. Gas mileage is also on the low side, averaging 17 mpg in the city and 23 mpg on the highway for the V6 AWD model we tested. That’s on the low side of most crossovers we’ve tested.

Peace of mind thanks to VW’s outstanding warranty

Where Volkswagen shines across any of its models lately is the generous six-year, 72,000-mile limited warranty. While you don’t get complimentary maintenance, you will be able to transfer the balance of your warranty to subsequent owners.

Volkswagen’s Car-Net app lets you monitor and locate your vehicle as well as lock and unlock doors remotely, and provides roadside assistance for you should you break down. See our 2019 GTI review for more details.

Despite the lack of in-dash navigation with the SE with Technology, that’s the model we’d go with, unless you have the extra $3,000 or so for the SEL. If you have grown kids, the optional second row captain’s chairs might be nice, but the flat-folding bench seating gives you TONS of storage space which we’d think to be more valuable, so we’d stick with the standard seating arrangement.

The R-Lines are attractive, but they’re only an appearance package that doesn’t fix the Atlas’ bland interior. We’d skip it unless you’re able to score a good deal on one with your local dealer.

Make sure you test drive competitors like the Durango and Explorer before making a final decision. Each of these models have their own distinct advantages, and in some cases, the Atlas may end up being the more economical choice. The competition in this segment is close, and none of these options stand out as the obvious best pick for everyone.

Yes. With the Atlas, it appears Volkswagen has figured out the American market. The interior is a bit of a disappointment, but the exterior looks great, and the comfortable ride makes it a solid choice in the crossover market.

This is only the second year for the Atlas. From the sales numbers we’ve seen, plenty of American consumers are already willing to give VW a shot.