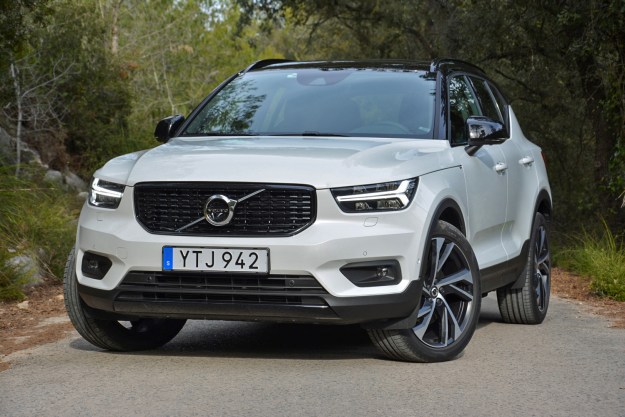 “The first-ever Volvo XC40 proves a small SUV doesn't have to be cheap, basic, or bland.”

The high-toned Volvo 40.1 concept set a ball rolling that was caught earlier this year by the 2019 XC40. It’s the company’s first subcompact SUV, meaning it’s been dropped into a segment of the market expected to swell unrestrainedly in the coming years. In time, this could become Volvo’s best-seller.

In short: everything. Anders Gunnarson, Volvo’s chief designer, told Digital Trends the team in charge of the XC40 went to great lengths to avoid creating a scaled-down version of bigger models like the XC60 (which debuted earlier this year) and the XC90. The 40 needed to have a personality of its own inside, outside, and even behind the wheel.

It’s also the first model built on the Swedish company’s CMA architecture. Highly modular, the platform will underpin a number of upcoming Volvo models including additions to the 40-series cluster and the brand’s first full-production electric vehicle, which is scheduled to arrive in 2019.

Look around and you’ll likely notice more and more people sit up high as they commute. Subcompact cars are out, and subcompact SUVs are definitely in. The XC40 is an attempt to surf that wave. It competes for the same turf as the Mercedes-Benz GLA, the BMW X1, and the Audi Q3.

That means it’s aimed, unabashedly, at younger buyers. And Volvo has not traditionally been a youth-focused brand. Before it began its renaissance in 2010, the company’s products held a great deal of appeal to librarians in Vermont and tenured college professors but they rarely earned the lust of 30-somethings. Brand officials held design clinics in North America, Europe, and Asia to learn how to fluently and convincingly speak millennial-ese.

Volvo breaks down the XC40 line-up into two trim levels named Momentum and R-Design. The Momentum is offered with a T4 engine, which Volvo hasn’t fully detailed yet because it won’t be available at launch, and a more powerful unit called T5 in Volvo-speak. The R-Design only gets the latter engine.

Let’s start with the nitty-gritty: T5 is shorthand for an all-aluminum 2.0-liter four-cylinder engine that uses a turbocharger to provide 248 horsepower at 5,500 rpm and 258 pound-feet of torque over a broad band that stretches from 1,800 to 4,800 rpm. That’s enough for a 6.2-second sprint from zero to 60 mph.

Volvo’s crisp-shifting eight-speed automatic transmission transfers the engine’s power to all four wheels via an all-wheel drive system designed in-house. The T4 we don’t know much about yet will come only with front-wheel drive. It will be less powerful, with just 185 hp on tap, and correspondingly slower. In comparison, the base variants of the GLA, the X1, and the Q3 pack 200, 228, and 208 hp, respectively.

The 40 is more youthful than the bigger XCs and the color palette reflects that well.

We can confirm Volvo will introduce a battery-electric XC40 in the coming years. Adding a plug-in hybrid variant is doable, and it’s certainly a possibility down the road, but the model hasn’t been approved for production yet.

The 40 is more youthful than the bigger XCs and the color palette reflects that well. It’s available in eye-catching hues like light blue and red, while some models offer the possibility of a two-tone look via a white or a black roof panel. Inside, things get even more vivid. The R-Design model is available with so-called lava carpet that makes the passengers feel like they’ve veered off course in Bowser’s Castle.

The interior is specific to Volvo’s smallest SUV, but many of the tech features have seeped down from bigger models. If you’ve sat in a Volvo recently, you’ll immediately recognize the digital instrument cluster and the nine-inch touch screen embedded right in the middle of the dashboard. We’ve praised the system in the past; it’s one of the best infotainment solutions on the market regardless of segment. It’s no different in the XC40. It’s straight-forward to navigate, the graphics are excellent, and it responds to input with smartphone-like speed. The screen also replaces a majority of the buttons normally found on the dash, though Volvo wisely retained a volume knob.

In the center console live a 12-volt outlet, two USB ports, and an optional wireless phone charger. The dash houses a fresh air woofer, hidden out of sight so it doesn’t take up real estate that can be used for storage – we’ll get to that part later. The standard sound system is on par with others in the segment, delivering sound that’s clear and loud without going over the top. The upgraded Bowers & Wilkins system offered on bigger Volvo models isn’t available here, though audiophiles can select an optional 13-speaker Harman/Kardon setup.

One of the XC40’s coolest features, is the digital key.

One of the XC40’s coolest features, one that’s unique in the segment, is the digital key. Imagine your brother wants to borrow the car while you’re out of town. He can request access to it via a purpose-built application. You’ll instantly get a notification on your phone, even if you’re in Sydney enjoying the holidays in a t-shirt and the car is frozen to the ground in your Boston driveway.

You can either grant him access or kindly suggest he downloads Uber; that’s not Volvo’s business. If you’re feeling generous, he can then use the app to unlock the XC40, start it, and lock it again when he gets to his destination. At the end of the pre-determined loan period, the application sends you a report that lists where the car was dropped off, a summary of how far it was driven, and how much fuel it burned. The idea isn’t to make money – though it doesn’t take a great deal of imagination to see how the tech could one day morph into a pay-per-use platform. Right now, however, the digital key is merely an additional convenience feature.

The cabin is nicely appointed, with quality materials that feel like they’re properly attached together. You can find cheaper plastics if you look hard enough. The trim on the rear door panels isn’t nearly as nice as the one found up front, for example. That’s par for the course in this segment and we can say the same thing about any of the XC40’s rivals.

Like Audi, Volvo offers real leather upholstery as standard equipment regardless of trim level. Mercedes-Benz bundles leather into an expensive option package on the GLA. Over at BMW, resting your bottom on a bona fide cow hide will set you back nearly $1,500.

The best part of the interior is how human-centric Volvo made it. There are two cup holders, which you’ll find in almost every car on the market today. What you’ll also find is they normally contain a lot of different things, from credit cards to keys to wrappers to a phone, but rarely cups. To that end, there is a smartphone-sized slot built into the center console, a huge storage compartment under the central armrest, a drawer under the front seat for items you want to keep out of sight, a flip-out hook for grocery bags in the glove box lid, and laptop-sized bins in the front door panels. But, best of all if you’re a maniac about keeping your car tidy, the center console boasts a small garbage bin that’s removable and washable. Starburst wrappers, Starbucks receipts, and Tic Tac boxes will never litter your car again. Just don’t forget to take out the trash once in a while. There’s no recycle bin – yet.

The best part of the interior is how human-centric Volvo made it.

The XC40 has five seats, but we don’t recommend sardine canning three adults on the rear bench for any prolonged period of time. Stick to four passengers and even six-footers get enough head and leg room to feel comfortable. The front passengers sit relatively high up, making the XC40 feel more like an SUV than the GLA, which in comparison is more hatchback-ish.

Cargo capacity checks in at 20.7 cubic feet, which is about average for the segment. If trunk space is a priority, the X1 is your best bet in this segment by a long shot. We did like the XC40’s modular trunk floor, though, which makes it possible to hide the parcel shelf out of sight when it’s not needed.

The XC40 isn’t the quickest contender in its class and it’s not the sharpest to drive, even in R-Design guise. It wasn’t designed to be, either. It’s comfortable, relaxed, and just dynamic enough to get you around a bend quickly when the pace picks up without exhibiting a harrowing amount of body lean. The well-tuned suspension filters out a lot of imperfections in the road, though the ride would be even smoother if it sat on smaller wheels. Alas, it’s a concession Volvo made in the name of design. The steering is on the lighter side of the spectrum, as in most modern-day Volvos, but one of the built-in driving modes tightens it up a little bit.

The XC40’s restrained footprint and contained turbo lag make playing the zig-zag game in downtown Barcelona a breeze. Swerve left when a yellow and black SEAT taxi suddenly brakes to pick up a fare. Good job, level two: Swerve right to miss a tourist who suddenly leaps into the street, following Maps to the nearest tapas joint or an elusive Charizard, and then accelerate to make the next light. The 40 feels more at home in the city than its bigger 60- and 90-badged siblings, which you’d expect. The thin A-pillars give the driver a commanding view of the road ahead, but the upswept belt line makes you rely heavily on the blind spot monitoring system (when equipped; it’s optional) to tell when another car lurks out of sight.

It’s comfortable, relaxed, and just dynamic enough to get you around a bend quickly.

The XC40 punches above its weight class on the highway, where it eats up miles like a much bigger car. It’s composed and docile, though louder than the XC60 we drove on the same roads earlier this year. Our test car came with the optional Pilot Assist tech, which is like a superman-esque adaptive cruise control system that maintains a steady speed while preventing the car from wandering out of its lane. It works well enough that we found ourselves using it almost every time we traveled on Spain’s autopista.

Our time behind the wheel was too short to accurately measure real-world fuel economy figures. The Environmental Protection Agency (EPA) hasn’t tested the car yet.

The name Volvo is a byword for safety. The XC40’s generously long list of standard features includes City Safety, which automatically applies the brakes when it detects a collision with another vehicle, a pedestrian, a cyclist, or a large animal is imminent. It works at up to 37 mph.

The 2019 Volvo XC40 blows the competition away, and we don’t say that lightly. It proves a small SUV doesn’t need to feel cheap, basic, or like a miniature version of a bigger model. It’s comfortable, fluent in tech, well equipped, and versatile. It’s an overall attractive package made more appealing by Care by Volvo, the company’s novel subscription model. You can find more spacious rivals (the X1) and faster ones (AMG’s slot car-like GLA 45), but as an all-rounder, the XC40 should be at the top of your list.