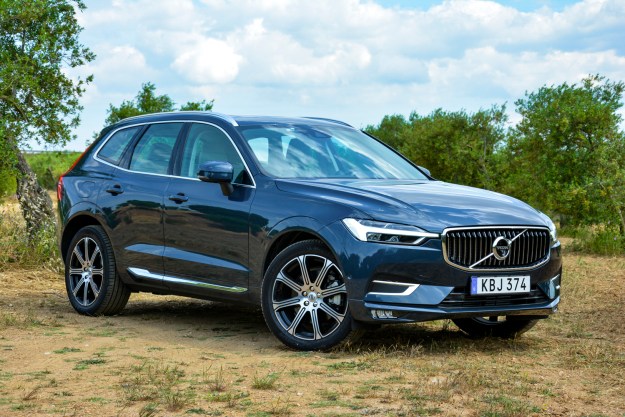 “Fluent in tech and as posh as a Swedish hotel room, Volvo's new XC60 is ready to shake up the pecking order in the compact luxury SUV segment.”

The previous generation of the Volvo XC60 set the bar high for its successor. It was Volvo’s best-selling model for years, and it actually found more buyers as it aged. That might not sound unusual if you’re into French cheese, but it almost never happens in the auto industry; it’s usually the other way around. The surge in sales is due to Volvo offering a solid, quality product, and it also illustrates the uncontainable rise of SUVs in key markets all over the world.

Since the original, award-winning XC60 debuted, the SUV segment has gotten so big that it’s now chock-full of options that often look and drive a lot alike. The new model aims to stand out from its peers the way only a Swede can: quietly, controllably, and humbly. No crazy PR stunts, no celebrities posing half-naked on the hood, and no ephemeral lap record on that long, famous German track.

Entering its second generation, the XC60 is brand-new for the 2018 model year. Visually, it falls in line with Volvo’s most recent design language. Handsome from all angles, it borrows styling cues from the bigger Volvo XC90 – the model that spearheaded the company’s renaissance – but it’s not a carbon copy of it. When viewed from certain angles (such as the rear three-quarters) it looks like an evolution of its predecessor, which was precisely the design department’s intention.

Stepping into the XC60 is like entering a luxurious hotel room in the north of Sweden.

The XC60 also shares its powertrains with its bigger stablemates. The palette includes a 250-horsepower 2.0-liter turbo four, a 316-horsepower version of the two-liter fitted with both a turbocharger and a supercharger, and a gasoline-electric plug-in hybrid rated at a stout 400 horsepower. Called T5, T6, and T8, respectively, all variants come with an eight-speed automatic transmission and all-wheel drive.

To simplify buyers’ lives, the XC60 lineup is broken down into three trim levels named Momentum, R-Design, and Inscription. Pricing ranges from $41,500 to $56,700 before a mandatory $995 destination charge and options are factored in.

Stop us if you’ve heard this one before: Volvo makes one of the very best infotainment systems in the industry

Stop us if you’ve heard this one before: Volvo makes one of the very best infotainment systems in the industry. We know, it sounds like a cliché, but it’s true. Named Sensus, it’s displayed on a 9-inch portrait-oriented touch screen neatly integrated into the center console. It’s like having an iPad glued to your dashboard.

Sensus groups the XC60’s navigation, entertainment, and connectivity functions into a single easy-to-use unit. There’s virtually no learning curve involved because every menu is clearly labeled, and most of the functions are only a few clicks deep. Android Auto and Apple CarPlay compatibility come standard on all trim levels, but this is one instance where we can’t fathom why you’d want to override the native infotainment system. It’d be like eating at Paul Bocuse’s restaurant and smothering every dish with chipotle Tabasco.

The XC60 is available with Pilot Assist, which is the name of Volvo’s suite of electronic driving aids. Active at up to 80 mph, Pilot Assist handles steering, acceleration, and braking on its own. We got acquainted with the system while driving out of Barcelona during peak rush hour, when the streets turn into a gigantic parking lot, and it works as advertised. The XC60 brings itself to a full stop when needed, and it drives smoothly without making any sudden maneuvers, even when the road turns.

The system works well at higher speeds, too, provided the lanes are clearly marked and there aren’t too many of them branching out from the same point. However, Volvo stresses it’s important to keep both hands on the steering wheel. Pilot Assist emits visual and audible warnings if it detects the driver’s hands are elsewhere for too long.

That means you’ll need to take a cab if you want to play the newest Mario Kart game on your way to the airport – at least for the time being. Volvo is developing a fully autonomous car, notably through the Drive Me pilot program in Sweden, but it’s at least a few years away from breaking cover.

“We’re not going to say we’re there until we’re absolutely sure,” Graeme McInally, Volvo’s director of crash analysis, told us.

Our test car was equipped with a digital instrument cluster, which can be configured to show a wide variety of information including navigation directions, and the Bowers & Wilkins sound system, which delights audiophiles with concert hall-like sound. Seriously, this isn’t your average car stereo; there’s a fresh air subwoofer built into the body.

Stepping into the XC60 is like entering a lavish hotel room in the picturesque north of Sweden. Every part of the cabin feels nice to touch and look at, from the stunning driftwood trim on the dashboard to the soft-touch plastic on the center console.

Pilot Assist works as advertised. The XC60 brings itself to a full stop when needed, and it drives smoothly, even when the road turns.

Luxury comes standard in Volvo’s newest SUV; all models regardless of trim level boast plush leather upholstery on the seats and on the steering wheel, as well as a panoramic sunroof that bathes the cabin in natural light.

Volvo isn’t kidding when it says the interior is inspired Scandinavian design trends; the XC60 looks like no other car in its segment. For example, a thin strip of aluminum trim underlines the dashboard from door to door, giving it a simple, minimalist look that’s accented by the near-complete lack of buttons. It’s not exuberant or ostentatious; in 20 years, the cockpit will still look just as elegant as it does today.

There’s enough space inside for five passengers. You’ll find the middle seat in the second row cramped if you routinely haul around Swedish Vikings, but it’s spacious enough for normal-sized adults on short trips. Out back, there’s 29.7 cubic feet of trunk space, which is considerably more than the Mercedes-Benz GLC, and a few cubes ahead of the BMW X3 and the Audi Q5.

The model we drove in and around Barcelona, Spain, came equipped with Volvo’s mid-range T6 engine. It’s built around a 2.0-liter four-cylinder engine that uses both a turbocharger and a supercharger to produce 316 horsepower at 5,700 rpm and 295 pound-feet of torque from 2,200 to 5,400 rpm.

On the highway, the XC60 is calm and relaxed without being soft or boring. Never too hardcore, it delivers a supple ride and confident handling. It wasn’t designed as a sports car, and it doesn’t try to behave like one. It’s an SUV you feel good in, whether you’re sitting behind the wheel or behind the driver’s seat. A thick serving of sound-deadening material amplifies the feeling of serenity by ensuring you don’t hear the engine groan under acceleration, or the noise from road.

With time to kill before our afternoon flight home, we drove up from Barcelona to a small town called Begues. The view you get is breath-taking because the road overlooks the city, and the Mediterranean Sea. However, it’s twisty, steep, and it was probably last paved when the minuscule SEAT 600 was considered a standard-sized car.

Normally, driving a SUV in conditions like these is more awkward than playing drums after dipping the sticks in melted butter. And yet, the XC60 impressed us with how car-like it behaved.

The vague, top-heavy handling we tend to associate with many SUVs was nowhere to be found. Body roll only became irksome when taking a corner really fast, which we partly attribute to our tester’s soft air suspension, and the transmission managed to select the right gear when pulling out of a turn. Visibility is excellent due to the large glass area, which helps when meandering through tiny, SEAT-sized streets … and when backing up for a few hundred feet after you realize you’ve reached a tight dead end.

The steering is on the light side when you put the drive mode selector in Eco or Comfort, and there’s not as much feedback as we’d like. Of course, there’s an option that lets you modify an array of parameters – including the steering – individually to create your very own driving mode. Still, it’s not the most engaging car to drive in its competitive set. The chassis engineers told us it doesn’t need to be; that’s not what its target audience is after.

When it comes to safety, Volvo’s track record is second to none. The company boldly promised that no one will be killed or seriously injured in one of its new cars by 2020, and it’s sticking to that goal. To that end, the XC60 inaugurates three new driver assistance features that promise to steer you out of trouble when a collision is imminent.

Before, the City Safety tech applied the brakes as hard as possible to avoid a crash. Now, the system can detect when braking won’t cut it and maneuver around the obstacle – be it an angry moose or a large truck – if it’s safe to do so.

Oncoming Lane Mitigation detects when the car swerves out of its lane, and automatically steers it back where it belongs. This helps prevent dangerous head-on collisions, especially on high-speed country roads with no center divider. The optional Blind Spot Information System (BLIS) performs the same function to keep motorists from getting rear-ended or side-swiped.

These driving aids join a growing list of features, which includes roll stability control, run-off road mitigation, and road sign information. Finally, every XC60 leaves the factory with front, side, and curtain airbags, as well as a knee airbag for the driver.

The 2018 Volvo XC60 has everything it takes to follow the path blazed by its best-selling predecessor. It’s handsome, it’s comfortable, it’s fancy, and it’s loaded with user-friendly tech. By taking a different approach to luxury, Volvo has found the right formula to shake up the pecking order in the compact SUV segment.