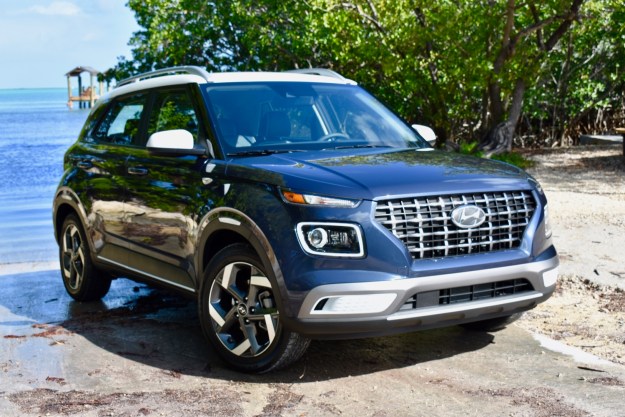 “The 2020 Hyundai Venue delivers tons of tech at an affordable price.”

It’s now taken for granted that American buyers prefer crossovers to regular cars, so automakers are jacking up the ride heights of small hatchbacks to create new models that have the crossover look, but not the utility or all-wheel drive capability. The trend started with the Toyota C-HR and Nissan Kicks, and now we have a new entry – the 2020 Hyundai Venue.

The Venue follows the same recipe as the C-HR and Kicks. However, Hyundai says it’s aimed primarily at used car shoppers. Hyundai believes a low base price, combined with up-to-date tech and a new-car warranty, will lure buyers away from used car lots. Starting at $18,345, the Venue does offer a lot of tech for the money, including standard Apple CarPlay/Android Auto, and a host of driver aids.

But is the 2020 Hyundai Venue truly cheap and cheerful, or just cheap? At Hyundai’s invitation, I drove a Venue from Miami to the Florida Keys to find out.

The Venue is distinguished from conventional small hatchbacks by its styling. It stands a bit taller, both because of an upright, boxy body shape and a taller ride height. The Venue also wears the same grille as larger Hyundai crossovers, to help reinforce the idea that it isn’t just a normal car.

Like the Nissan Kicks, the Venue is available in a two-tone color scheme that gives the car a bit more personality. However, that option is only available on the top Denim trim level, you only get one choice of color combination – blue with a white roof.

Your mileage may vary on the styling, but a boxy design should yield greater passenger and cargo space than something sleeker and more car-like. Yet even with its sloping roof line, the Toyota C-HR has more cargo space than the Venue.

Meanwhile, the Kicks has more cargo space, as well as more front passenger space, than the Toyota or Hyundai. On paper, the Venue has more rear passenger headroom and legroom than the Kicks, but that doesn’t amount to much in the real world.

The Venue is distinguished from conventional small hatchbacks by its styling.

The Venue’s back seats are cramped, especially if the front seats are adjusted for tall people. Cargo space is good for a small hatchback, but not impressive compared to true crossovers. Even the Hyundai Kona, a tiny vehicle itself, offers more.

When it comes to utility, the Venue (and other vehicles like it) don’t offer enough to justify the crossover label. If you’re cross shopping the Venue against used cars, as Hyundai believes many buyers will, you’ll likely be able to find something with more space for the same price.

The front seats are a nice place to be, at least. They’re comfortable for a vehicle in this price range, although we prefer the more supportive chairs in the Nissan Kicks. Hyundai also doesn’t have anything to rival Nissan’s optional Bose audio system, which features speakers in the front head restraints.

The Venue’s interior materials and overall design feel more upscale than the Nissan’s, however, and both the Kicks and Venue feel more welcoming than the Toyota C-HR, which seems dated by comparison.

Hyundai may have skimped on interior space, but it didn’t skimp on tech. The affordable Venue comes with plenty of tech features as standard equipment.

The standard infotainment system includes an 8-inch touchscreen and both Apple CarPlay and Android Auto. Toyota offers the same-size screen in the C-HR, and is adding Android Auto alongside Apple CarPlay for the 2020 model year.

Nissan requires you to upgrade from the base Kicks S trim level to the SV to get Apple CarPlay and Android Auto, and the biggest available touchscreen is only 7 inches. Navigation-equipped Venue models also get real time traffic information at no extra charge.

This is where Hyundai’s strategy of pitting the Venue against used cars comes into play. You’re not guaranteed to find these connectivity features on every older vehicle.

The Venue may be an entry-level model, but it comes with plenty of tech.

As with other Hyundai models, the infotainment system is basic but functional. The screen’s graphics aren’t elaborate, but they were easy to read at a glance. Shortcut buttons for menus make the system easier to use while driving.

Hyundai also provides several places, including a shelf on the passenger’s side of the dashboard, that look like a good place to rest a phone. At least, until you accelerate or brake hard, and said phone goes flying.

As with infotainment tech, used cars with these features may not be available at the same price, so Hyundai’s argument holds up. But the Venue’s new-car rivals do offer similar tech as standard equipment – as well as features the Venue doesn’t have. The Toyota C-HR has adaptive cruise control, while the Nissan Kicks has reverse autonomous emergency braking.

The Venue’s driver aids are a mixed bag. The lane keep assist was too sensitive, assuming any slight deviation from a straight line was a potential off-road excursion. It was also confused by highway on-ramps. In addition to being skittish, the lane keep assist aggressively tugged at the steering wheel to try to pull the Venue back into line.

I was impressed by the blind spot monitoring’s ability to detect cars well behind line of sight, but its loud warning chime sounded like a bad television special effect. Instead of being helpful, it was jarring.

Hyundai says the Venue was designed for young urbanites, and my test drive started and ended in downtown Miami, with stretches of highway in between. That’s where Hyundai’s penny pinching began to show.

The Venue is available solely with a 1.6-liter four-cylinder engine, making 121 horsepower and 113 pound-feet of torque. If that doesn’t sound like enough to you, you’re correct. It’s easy to assume that urban driving is all about sitting in traffic, but that isn’t really the case. Maneuvers that would have seemed routine in most other cars became nerve wracking.

The manual would have at least given use more control, helping to keep the engine in its powerband. The problem could also just be bad tuning. Nissan’s Kicks also uses a CVT, and makes similar power to the Venue (122 hp and 114 lb-ft). But the Kicks doesn’t feel nearly as sluggish as the Venue.

This little Hyundai was comfortable and quiet, but not fun.

Car people like to say that it’s more fun to drive a slow car fast than it is to drive a fast car slow, but the Venue is the exception to that rule. This little Hyundai was comfortable and quiet, but not fun. It’s small, but not agile. The driving experience was so unremarkable that we didn’t mind being in Florida, a state notorious for its lack of good driving roads.

To keep the Venue’s price down, Hyundai nixed all-wheel drive. The added traction of all-wheel drive is one of the reasons for choosing a crossover instead of a conventional car. However, all-wheel drive would have added $2,000 in manufacturing costs (which would have driven up the base price) and 200 pounds to the curb weight (which would hurt gas mileage), Derek Joyce, public relations manager for Hyundai crossovers, told Digital Trends.

The Venue is front-wheel drive only. Luckily for Hyundai, so are the Nissan Kicks and Toyota C-HR. The Venue does get a “snow mode” for the traction control that alters throttle response and CVT behavior for more grip, but I didn’t get to test that in sunny Florida.

The Venue is a new model, so it’s difficult to predict future reliability. Hyundai has a good overall reputation for reliability, and offers one of the longest warranties in the business. The Korean automaker’s 10-year, 100,000-mile, powertrain warranty and five-year, 60,000-mile, limited warranty far surpass Nissan and Toyota.

The Venue’s is new, so crash test ratings from the Insurance Institute for Highway Safety (IIHS) and National Highway Traffic Safety Administration (NHTSA) aren’t available yet.

My ideal 2020 Hyundai Venue is a Denim model. The Denim includes optional tech features, such as blind spot monitoring, rear cross traffic warning, and navigation, from the SEL trim level, and adds a dose of style. The Denim’s two-tone blue-and-white exterior and blue interior make the Venue feel special. At $23,045, the Denim is a big step up from the base Venue SE’s $18,345 starting price, yet still a good value.

The 2020 Hyundai Venue is a solid car, but whether it’s the right car for you  depends on your priorities. If you want a real crossover, with more interior space than a normal car and all-wheel drive, look elsewhere. The Venue is more like a tall hatchback than a true crossover.

That can also be said of the Nissan Kicks and Toyota C-HR, the Venue’s two logical rivals. The Nissan and Toyota also lack all-wheel drive, and are similar in size to the Hyundai. While the Venue’s interior material quality and overall refinement did impress us, it doesn’t pull off a clear victory. The Kicks doesn’t have standard Apple CarPlay and Android Auto, but it does have more interior space and a gutsier engine. The C-HR has a higher base price, but comes standard with adaptive cruise control – which isn’t available on the Venue at any price.

What about the used cars Hyundai said were the Venue’s real rivals? Again, it depends on priorities. The Venue offers up-to-date tech and a new-car warranty, but at the expense of interior space and acceleration. Hyundai offers more tech and peace of mind for the money, but it’s possible to get more car on the used market.

Yes. The 2020 Hyundai Venue may not be a true crossover, but it’s a good car.