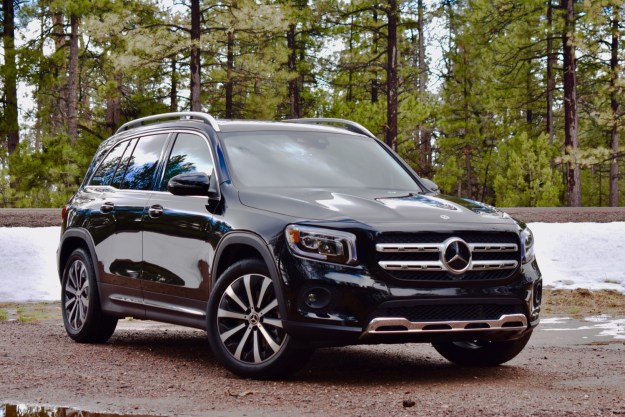 “The 2020 Mercedes-Benz GLB doesn't compromise on practicality or luxury.”

Mercedes-Benz took a big risk bringing its line of compact cars to the United States. With four-cylinder engines and front-wheel drive, these cars have more in common with the average Honda or Toyota than anything traditionally associated with Mercedes. But the gamble payed off. These cars attracted younger customers to Mercedes. Now, the automaker is expanding the lineup – in more ways than one.

The 2020 Mercedes-Benz GLB is the second crossover in the Mercedes compact lineup, alongside the GLA. It’s also the largest car in the group, boasting a longer wheelbase and a tall, squared-off roof to maximize interior space. This is the most practical baby Mercedes yet.

To see if practicality and luxury can coexist in such a small package, Digital Trends headed to Arizona, where Mercedes invited us to drive the 2020 GLB from Scottsdale to Sedona and back. Our test car was a 2020 GLB 250 model with optional 4Matic all-wheel drive, carrying a base price of $39,595.

The GLB looks like a traditional SUV, but it’s actually a car-based crossover sibling to the Mercedes A-Class sedan and CLA “four-door coupe.” It doesn’t have the off-road capability of a proper SUV like the Mercedes G-Class. Most customers won’t care (the average car buyer doesn’t do much off-roading), they’ll just be happy to have something that doesn’t look like an ordinary car. But that’s not the only reason this design works.

Making a car shaped like a box is a great way to increase interior space. The GLB is much more spacious than Mercedes’ other compact crossover, the GLA, which is basically a glorified hatchback. Despite the vehicle’s relatively small footprint, Mercedes offers the GLB with a third row of seats, bringing the total number to seven. Mercedes only had two-row, five-seat models available to test, however.

The Land Rover Discovery Sport also offers a third row, but neither crossover has a clear advantage in spaciousness — on paper, at least. The Mercedes has more cargo space than the Land Rover with both rear rows folded, and with all three rows in place. But the Discovery Sport offers more cargo space if the third row is stowed, which is likely how most people will use it.

Other luxury automakers offer similarly-sized crossovers, but without the third row. The BMW X1 has more headroom, but the GLB has more legroom. The Audi Q3 trails behind both of its German rivals. With its second row folded, the Mercedes has significantly more cargo space than the BMW and Audi. Mercedes didn’t have a comparable figure available with the second row up, but indicated there is a difference between the numbers for the five-seat and seven-seat versions.

The GLB’s cabin is also a nice place to be. The tall roof makes room for lots of glass, giving the interior an open, airy feeling. As with the 2020 Mercedes-Benz CLA we tested alongside the GLB, interior materials are a step down from more expensive Mercedes models, but of appropriate quality for this price range. However, drivers expecting the traditional tall SUV seating position will be disappointed. You do sit a bit higher than in a normal car, but not so high that you’re towering over traffic like Immortan Joe.

The GLB gets the same MBUX (Mercedes-Benz User Experience) infotainment system as the 2020 CLA, which is not a bad thing. It includes standard Apple CarPlay and Android Auto, with an available setup that merges the infotainment screen and digital instrument cluster into one long, horizontal screen. As with the CLA, we felt the screen was better integrated into the dashboard than in higher-end Mercedes models, and were impressed by its stylish graphics and responsiveness.

MBUX includes a voice assistant that (officially) responds to the prompt “Hey, Mercedes” (we’ve found that just “Mercedes” works fine). It’s designed to respond to more conversational voice commands, allowing you to adjust the temperature by saying “I’m cold,” or tune the radio by saying the name of a station.

The voice assistant worked so well that it became our primary interface. Granted, we hopped into the GLB after having just driven the CLA, so we were pretty familiar with this feature. But familiarity means nothing if tech isn’t easy to use. We keep using the voice assistant across drives in two different cars because it was the best option. But it wasn’t the only one.

If talking to inanimate objects isn’t your thing, you can still use the central touchscreen, which is backed up by hard buttons for specific menus. The GLB also features a touchpad controller and steering wheel controls – the same arrangement used in its CLA sibling. We think it’s important that Mercedes – and other automakers – continue to offer options like these so that drivers can pick what’s easiest for them.

At launch, the 2020 Mercedes-Benz GLB will only be available in one flavor. The GLB 250 model uses a 2.0-liter turbocharged four-cylinder engine, making 221 horsepower and 258 pound-feet of torque. That engine is coupled to an eight-speed dual-clutch transmission, with standard front-wheel drive or optional all-wheel drive.

Mercedes claims all-wheel drive, five-seat models like our test car will do zero to 60 mph in 6.9 seconds. That’s 0.1 second quicker than a comparable Audi Q3, but the BMW X1 betters both with a time of 6.3 seconds, according to estimates from the respective manufacturers. The base Discovery Sport does zero to 60 mph in 7.1 seconds, but can manage 6.6 seconds with the optional mild-hybrid powertrain added for the 2020 model year, according to Land Rover.

In the real world, the GLB has plenty of power for overtaking on highways, but it’s no sports car. If you want thrills, wait until Mercedes launches the 302-hp AMG GLB 35. For now, the GLB is a comfortable, quiet cruiser that feels like a proper luxury car.

Off-pavement driving was limited to pulling off the road for photos, and we don’t expect the GLB to be capable of much more than that. While Mercedes did include an off-road driving mode, it’s nowhere near as sophisticated as the Terrain Response system available in the Land Rover Discovery Sport.

Official gas mileage ratings for the 2020 Mercedes-Benz GLB 250 are 26 mpg combined (23 mpg city, 30 mpg highway) with front-wheel drive. All-wheel drive usually comes with a gas mileage penalty, but in this case the GLB performs a bit better. Ratings are identical in the combined and city categories, and 31 mpg highway.

The GLB beats the Audi Q3 in gas mileage, and is about the same as the BMW X1. Ratings for the 2020 Land Rover Discovery Sport aren’t in yet, but the available mild-hybrid powertrain may give it an advantage. Speaking of hybrids, the Lexus UX 250h achieves 39 mpg combined with front-wheel drive, and 42 mpg combined with all-wheel drive. But the UX can’t match the GLB on interior space or infotainment tech.

Like many other luxury cars, the GLB doesn’t come with much standard driver assist tech. Autonomous emergency braking and a driver attention monitor are standard, but adaptive cruise control, blind spot monitoring, and lane keep assist are optional extras. Some of these features are more sophisticated than what you might find in an average car. For example, blind spot monitoring stays active for three minutes after the engine shuts off, to keep you from stepping out into the path of an oncoming vehicle. But it’s still hard to justify Mercedes’ policy when similar features are standard on cheaper cars.

The GLB is a new model, so it’s hard to judge reliability. Mercedes has a mixed reputation in this area. Crash test results from the Insurance Institute for Highway (IIHS) and National Highway Traffic Safety Administration (NHTSA) are not available at this time.

It doesn’t make sense to get a crossover without all-wheel drive, so our ideal GLB would include Mercedes’ 4Matic system (a $2,000 option). We would add the Premium Package ($2,200), which includes the biggest dashboard screen and blind spot monitoring, as well as the Driver Assistance Package ($2,250), which includes adaptive cruise control and a host of other driver aids. We would also add some standalone options, including: adaptive suspension ($990), a head-up display ($1,100), and wireless phone charging ($200).

Entry-level luxury cars sit in an awkward space between more traditional models and vehicles from mainstream brands. You can buy a lot of car for the GLB’s base price if you’re willing to forego the Mercedes badge. But with options, the GLB starts to encroach on the price of the larger GLC.

The GLB’s saving grace is its packaging. This is a right-sized crossover, with enough space to justify buying it over a sedan or hatchback, without getting excessive. It’s hard to find that in a crossover from any brand. Many “compact” crossovers from mainstream brands are quite large, while the smallest models compromise passenger and cargo space.

As a luxury vehicle, the GLB is better executed than its rivals from Audi, BMW, and Land Rover. The Mercedes is comparable to these crossovers in metrics like gas mileage and acceleration, but feels a bit more refined and special. It also has one of the best infotainment setups in this segment.

Yes. What it lacks in size, the GLB makes up for in practicality and luxury.