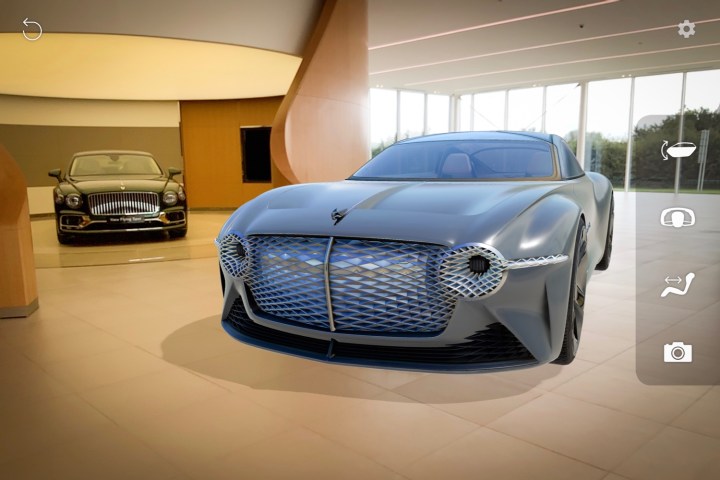 With a history that stretches back 100 years, Bentley is a pillar of old school automotive luxury. But with the EXP 100 GT concept, Bentley is trying to catapult itself into the future. The British automaker has even come up with a high-tech way to show off its latest concept car: an augmented-reality app.

Bentley 100 AR (which is only available on Apple devices) lets users get behind the wheel of the EXP 100 GT concept by scanning a QR code. The app includes full 3D models of the interior and exterior of the concept car. At Bentley dealers, users can view a full-scale virtual model of the car, with commentary from the team that designed it. Users can also download 3:4 scale and “desktop” models of the car at home, according to Bentley.

Automakers are experimenting with virtual models to more easily give people an up-close look at their cars. Bentley only built one EXP 100 GT concept, limiting how many people can potentially see it in person. But with the app, scores of potential customers can “see” the car wherever they happen to be. Automakers are also using similar technology to allow design teams to spread across the globe to look at the same virtual model of a car and collaborate on design changes.

The EXP 100 GT is a sight to behold, in pixels or metal. A massive coupe that dwarfs the current Bentley Continental GT, it’s powered by four electric motors that produce a combined 1,106 pound-feet of torque (Bentley won’t discuss horsepower). Bentley claims the EXP 100 GT can do zero to 60 mph in less than 2.5 seconds, and reach a top speed of 186 mph. The car also uses biometric sensors to determine the most comfortable seating positions, and tracks occupants’ eye movement and blood pressure to look for signs of discomfort. It’s what Bentley imagines future luxury cars will be like.

It’s unclear when production cars will start tracking people’s blood pressure, or sport biometric sensors, but an all-electric Bentley production model will arrive in 2025, the automaker has said. Building up to that, Bentley plans to add a hybrid powertrain to every model by 2023, starting with the Bentayga SUV.