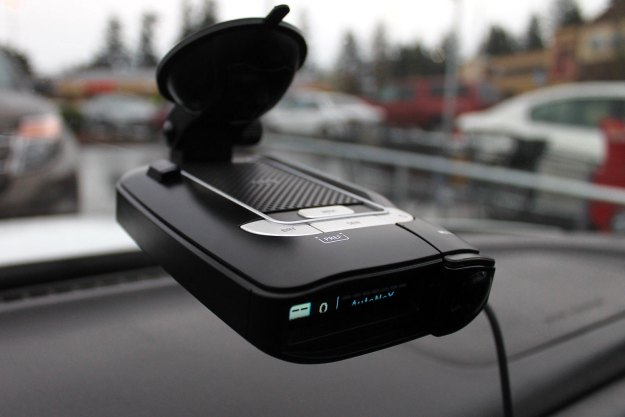 “The Escort Max 360’s powerful tech make it one of the most dependable radar detectors on the market.”

The average speeding ticket in the U.S. costs about $150, so if you’re willing to shell out hundreds more on a radar detector to avoid them, it’d better be a good one. In recent years, high-end detectors have added digital signal processing (DSP), directional technology, and smartphone connectivity to increase their potency, and the unit I’ve been testing over the last few weeks — the Escort Max 360 — incorporates all those features and more.

With an MSRP of $649.95 though, it could be a hard purchase to rationalize for those who don’t take driving lessons from Dominic Toretto or Frank Bullitt. More importantly, its main rival, the Valentine One, can be had for significantly less coin. Is it worth it? To answer that question, let’s break down what the 360 has to offer in terms of capabilities.

Tools of the trade

The device is rated for X, K, Ka, Ka-POP, and laser signals, and with its dual antenna setup, it can scan for them in every direction. Combined with its digital hardware, Escort’s flagship reacts very quickly and at an impressive range. It’s essentially the same DSP chip used in the Escort Max2, so while the product’s core functions probably won’t shock longtime fans of the brand, its full-circle awareness and directional tech just might.

As you may have guessed by its name, the star of the show is the 360’s arrow indicator. Simply put, it helps drivers figure out exactly where the 5-0 is coming from, allowing them to act quickly and ignore weak, stationary signals. This is actually the first Escort commodity to boast this type of technology, as Valentine held a patent on arrow indicators until 2011.

In addition, the high-priced Max equips GPS-enabled Autolearn, a system that files and rejects false alerts over time, as well as a pre-loaded “Defender” database of red light and speed camera locations. That’s not all though, because like many of its rivals, the Max has its own app that allows all the lead foots in your community to share speed trap information, real-time radar activity, and local speed limit data.

Well … does it work?

The Max 360 is clearly filled to the brim with gizmos, but the name of the game here is functionality, so my first point of evaluation was the Autolearn function. Why? Frankly, it seemed like the feature most likely to fall flat on its face, but potentially one of the most valuable for metropolitan customers. After attaching the suction cup bracket to my windshield and sliding the unit onto its magnetic mount, I was on my way.

The Escort Live app notifies you of local threats in real time.

My first test took me to the closest strip mall, which have historically been a major pain in the sides of detector users due to their motion-sensing doors and frivolous radar emissions. On my first pass, the Escort sang the song of its people loudly and proudly, but as I continued to drive by over the coming days, the alerts went away completely. It had learned. The Escort also allows you to lock out signals manually, which I took advantage of as I rolled by my local police station. Sure enough, the 360 remembered my inputs the next time around, reducing alert level down to a silent gray popup on the screen. If you drive in the city or other crowded areas often, you will absolutely love these features.

In terms of the essentials, the Max 360’s accuracy, range, and overall filtration abilities are exactly what you’d expect from a range-topping radar detector; it just works incredibly well. Like in the Max2, DSP sifts through heavily-saturated radar bands to locate those specifically used by law enforcement, ignoring background noise for a pleasant, largely uninterrupted ride.

If there’s one drawback with regard to performance, it’s ironically the arrows. The tech is very useful in a general sense, but the arrows respond relatively slowly when the position of threat changes. For example, when I passed a known speed trap on a cold Wednesday morning, it took a couple seconds for the arrow to switch from “ahead” to “behind.” The OLED display is a noticeable improvement over the Valentine’s LED red light tree however, as it can change color relative to the radar band being used.

As is the trend, the Max 360 uses Bluetooth to link itself to smartphones, giving users access to a community-based ticket protection program called Escort Live. Like Cobra’s iRadar system, Escort Live is a free app for Android and Apple Devices, one that notifies you of nearby alerts, red light camera locations, local speed limit data, and even your own over-speed violations.

Overall, it’s a very simple application to use — swipe left to report a risky area, tap to mute, and swipe right to lock out. Waze is still a better option for its large user base alone, but the ability to interface detector and phone gets major convenience points. Another thing to note is that while the Escort Live app is free, access to the Defender database will cost you $19.95 per year. As for the Valentine? There is a third-party YaV1 app available, but it only works on Android phones, and it doesn’t offer community connectivity like Escort Live does. Point goes to Escort.

In short, if a radar detector is must-have equipment and cost is of little consequence, this is the one to buy. Aside from a badge or spectacular flirtation skills, the Max 360 is best way to avoid a ticket, and even though it costs significantly more than the ol’ V1, it’s a much more modern, intuitive, and connected way to protect yourself.

Yes, the average ticket may only cost $150 or so, but as any stoplight racer will tell you, that can add up quick. So if you’re looking to avoid the constabulary altogether, opt for a radar detector that can literally watch your back.

2024 Chevrolet Equinox EV aims for affordability with $30,000 base price
Apple CarPlay feature to offer an easy way to pay for fuel
The best Android Auto apps for 2022: Music, Messaging, Navigation, and more
WWDC 2022 announcements: iOS 16, iPadOS 16, WatchOS 9, MacOS Ventura, MacBook Air M2, and more
The Uber hack is an outrageous tale of a teen hacking for fun
Tesla to fix window software on 1M of its U.S. cars
Lux and refreshingly livable, Mercedes’ EQE moves EVs mainstream
How to watch Tesla’s AI Day tonight and what to expect
2023 Audi Q4 E-Tron first drive: the predictable and traditional EV SUV we need
We need more 7-passenger EVs, but the 2023 Mercedes EQS SUV has room to improve
Tesla AI Day 2022: Optimus, self driving cars, and everything else announced
Tesla hopes full self-driving beta will be out globally by the end of 2022
Elon Musk reveals first delivery date and customer for Tesla Semi truck