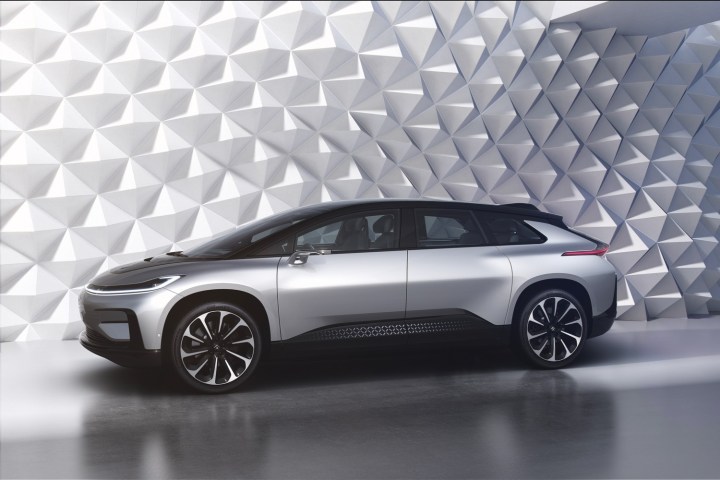 The Faraday Future FF 91 electric crossover was unveiled to dropped jaws at CES 2017, but Faraday has struggled to get it into production. Now that the California-based, Chinese-backed company seems to be making some progress toward that goal, Faraday wants to remind everyone what they’ve been waiting for. So it launched a “3D Tour” feature on its website that lets customers take a virtual walk around the FF 91.

Part of Faraday’s website, the feature shows an animated version of the FF 91, complete with working exterior lighting, and includes some specifications for the battery pack and powertrain. However, it doesn’t let the viewer look inside.

Faraday has boasted of some pretty impressive figures so far. The FF 91 sports a massive 130-kilowatt-hour battery pack, and at the car’s CES 2017 unveiling, Faraday said the pack would provide 378 miles of range on a charge. The powertrain consists of three electric motors producing a combined 1,050 horsepower. Faraday previous said the FF 91 would do 0 to 60 mph in 2.39 seconds — making it quicker than most supercars. A prototype raced in the treacherous Pikes Peak International Hill Climb in 2017.

That sounds pretty impressive, but it won’t mean anything if Faraday can’t get the FF 91 into production. Serious financial issues have rocked Faraday, which is backed by Chinese billionaire and LeEco founder Jia Yueting. The automaker was forced to give up on plans for a brand-new factory in North Las Vegas, Nevada, and is instead repurposing an old Pirelli tire factory in Hanford, California.

The forecast has been brighter recently, though. After taking over as CEO in late 2017, Jia secured a $2 billion financial lifeline for the beleaguered automaker. Faraday also completed the first FF 91 body shell at its Hanford factory, and hopes to begin customer deliveries in December 2018. The company has been taking reservations since early 2018, and will charge a low six-figure sum for the car.

Best air purifier deals for May 2022

This Dell laptop is $230 today — Why you should buy it