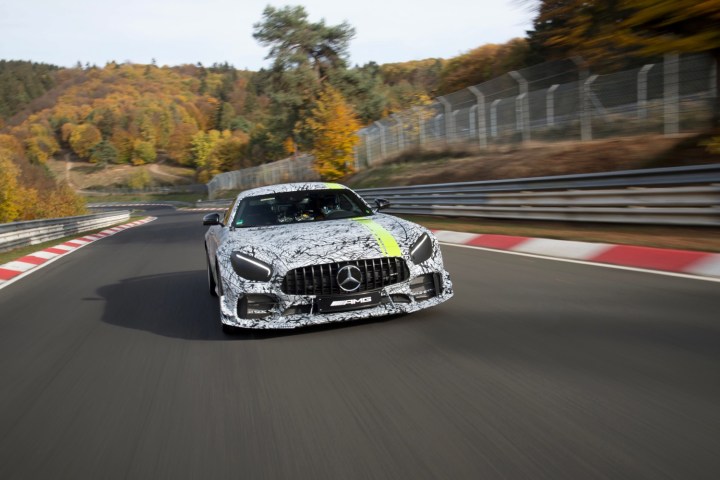 Mercedes-AMG just can’t stop tweaking its GT sports car. The two-seater is already available in a variety of strengths ranging from the base model up to the track-devouring GT R, not to mention a couple of racing versions. But Mercedes is preparing an even more aggressive variant, dubbed the GT R Pro, which will debut at the 2018 Los Angeles Auto Show.

The limited-edition GT R Pro will be more track-focused than any previous AMG GT model, which means it should be an absolute beast. Mercedes isn’t offering many other details beyond that, only noting that the GT R Pro was developed using lessons learned from the AMG GT3 and GT4 race cars. We wouldn’t surprised to see some weight reduction and additional power from the 4.0-liter twin-turbocharged V8, which makes 577 horsepower and 516 pound-feet of torque in the non-Pro AMG GT R.

The entire Mercedes-AMG GT lineup is slated for a minor styling refresh as well. Mercedes said the sports car will get interior and exterior styling tweaks that tie it closer to the Mercedes-AMG GT 4-Door Coupe. While both cars wear the “AMG GT” name, the two cars are not directly related mechanically.

The existence of a seemingly never-ending array of AMG GT variants is typical of Mercedes and its German competition. Along with Mercedes, BMW, Audi, and (to a lesser extent) Porsche now have sprawling lineups full of every possible permutation of body style, engine, and level of sportiness. Customers can’t seem to get enough of these cars, and the automakers are happy to deliver.

In addition to the unveiling of the Mercedes-AMG GT R Pro, the 2020 Mercedes-Benz GLE SUV will make its North American debut in L.A. It may not be as exciting as the GT R Pro, but the GLE is relevant to more people. The SUV sports twin 12.3-inch display screens that carve an impressive swath across the dashboard, and an electronic suspension system that actively counters body roll, pitch, and squat. The GLE will launch with the 3.0-liter inline-six that debuted in the CLS, but a plug-in hybrid and AMG performance version are expected as well.