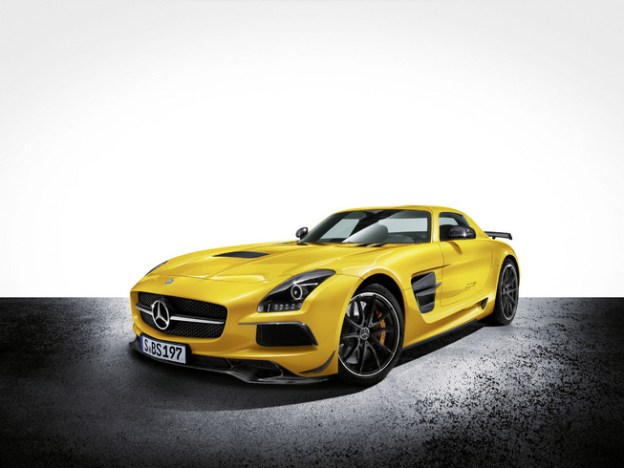 The folks at Mercedes-Benz AMG don’t know when to quit. After years of building insane performance versions of Mercedes cars, the company’s in-house tuner got the opportunity to design and build its own sports car, the SLS. Instead of leaving the 583-horsepower (in new for 2013 GT trim) “Gullwing” coupe and convertible alone, AMG decided to take things up a notch. The result is the 2014 SLS AMG Black Series, which is set to debut at the upcoming Los Angeles auto show.

The Black Series moniker denotes the most hardcore, uncompromising models in AMG’s lineup. The SLS is not the first Black Series car; it joins the C63 AMG Black Series in showrooms and succeeds Black Series models based on the previous-generation SLK, SL, and CLK.

The best way to make a car faster and more exciting is to add power, and that’s exactly what AMG did. The SLS’ current 6.2-liter V8 is being phased out and, for its final appearance, it will produce a staggering 622 hp and 468 lb-ft of torque (actually less torque than the GT’s 479 lb-ft). The engine also redlines at a ludicrous 8,000 rpm.

As with previous Black Series models, AMG also put the SLS on a diet. Buyers should expect plenty of carbon fiber, and fewer luxuries; the Black Series’ interior will probably be more like a racecar’s than a luxury car’s. Mercedes’ COMAND infotainment system is gone, although it can be put back in at the buyer’s request. That saves 13 pounds; overall the Black Series weighs 154 pounds less than an SLS AMG GT.

Weirdly, the extra power and weight savings don’t dramatically affect performance. Mercedes says the Black Series will accelerate from 0 to 60 mph in 3.5 seconds, only 0.3 second faster than the SLS AMG GT. The electronically limited 196-mph top speed, while impressive, is actually slightly slower than the GT’s 197-mph quoted top speed.

If it really isn’t faster than the current SLS, the Black Series had better be fun to drive.To give it better moves, AMG equipped the Black Series with carbon ceramic brakes, a stiffer suspension for better grip, and a rear differential lock. The rear track was also widened.

To show that the Black Series is something special, AMG gave it a visual makeover. The front splitter, rear spoiler, and ubiquitous air intakes make it look like a road-going version of the SLS AMG GT3 racer. The body itself is also significantly wider, contributing to that racecar feel and accommodating the wider rear track.

Pricing has not been announced, but expect the Black Series to sell for significantly more than the SLS GT’s $192,175 base price. The SLS AMG Black Series will debut at the Los Angeles auto show later this month, and will go on sale next summer as a 2014 model.