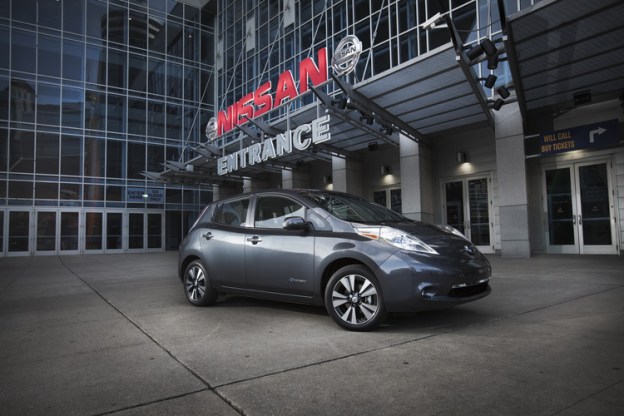 One of the biggest obstacles to electric motoring has been the high cost of entry. Nissan is trying to lessen that sticker shock with the 2013 Leaf. The first mass-produced modern battery-electric vehicle is now among the cheapest, with a base price of $28,800.

All Leaf models are still eligible for a $7,500 federal tax credit, although an $850 destination charge is being added to all 2013 Leafs.

A new base model helps, but the lower price is mostly due to Nissan’s decision to move Leaf production from Japan to Smyrna, Tennessee. Beginning with 2013 models, Nissan will build nearly the entire car in the United States, right down to its electric motor and lithium-ion batteries.

Nissan CEO Carlos Ghosn says the 2013 Leaf is the cheapest five-seat electric car on sale in the U.S. The Leaf (slightly) undercuts the former bargain basement king, the Mitsubishi i-MiEV, which starts at $29,125 (before the $7,500 federal tax credit and an $850 destination charge) and has four seats.

The new price also makes the Leaf a significant bargain compared to similar EVs like the Ford Focus Electric and Coda sedan, which start at $39,200 and $37,250, respectively.

Nissan also rearranged the Leaf’s content for 2013. Like the Leaf S that was launched in Japan recently, the U.S. version does not get certain standard features, like a navigation system and alloy wheels, that come with the more expensive trim levels.

The Leaf S also misses out on a new, 6.6-kWh charger, which can give the battery an 80 percent charge in four hours. The Leaf S comes with a 3.6-kWh unit, although buyers can have the more powerful charger as an extra-cost option.

The 2013 Leaf SV and SL also get an updated version of Nissan’s CarWings telematics system, which includes a “B-mode” setting that increases regenerative braking. CarWings also allows drivers to monitor the battery’s state of charge.