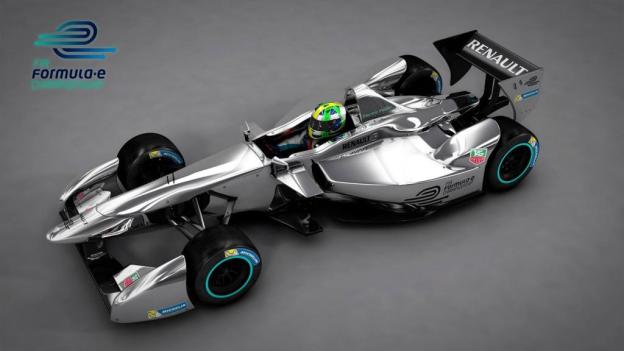 Renault will make the transition from internal combustion to electric racing with its announcement that it will join the Formula E Championship as a technical partner.

The French carmaker will join fellow Formula One competitor McLaren and others in developing electric open-wheeled racers for Formula E’s inaugural season next year.

Although Renault currently supplies engines to Red Bull Racing (badged as Infiniti), Lotus, Williams, and Caterham, it will primarily focus on fine-tuning an existing powertrain in Formula E.

Renault will work with Spark Racing Technology to optimize the electronics in that team’s cars, making them more reliable and safer.

All Formula E cars will share a chassis and an electric motor from McLaren, although the car currently under development will be known as the Spark-Renault.

Given its experience producing both Formula One racers and production EVs, participation in Formula E seems natural for Renault.

In addition to its current engine supply deals, Renault has won the Formula One World Championship with its own factory team, with the most recent win coming in 2006.

Off the track, Renault builds EVs like the Fluence Z.E., Twizy, and Kangoo Z.E. Its corporate partner, Nissan, also builds a little EV you may have heard of called the Leaf.

“We believe that motorsport is an efficient manner to promote the efficiency of new technologies, and we’re eager to use [Formula E] to show our technology is the best,” Renault product planner Philippe Klein said in a statement.

Formula E should fit the bill. As the name implies, it’s a racing series for the best electric-only race cars. The series is sanctioned by the FIA, the same organization that governs Formula One.

Like Formula One, it will also feature races all over the world. Miami, Los Angeles, Beijing, London, Buenos Aires, Rio de Janeiro, Rome, and Putrajaya (Malaysia) have already been selected to host emission-free races.

Formula E’s organizer hope to have 10 teams and 20 drivers on the grid by 2014. Each driver will actually have two cars, because the racers’ 25-minute running time won’t be enough to finish the hour-long races. That’s a very clever, if expensive, solution to range anxiety.

The races themselves, called “Electric Prix,” will be held over the course of a single day. Unlike Formula One, which spreads practice, qualifying, and racing over an entire weekend, everything will happen on race day.

It should be quite a spectacle, even if the characteristic shriek of revving engines is missing. If all goes according to plan, race fans can throw away their earplugs next year.

Would you watch an all-electric grand prix? Tell us in the comments.