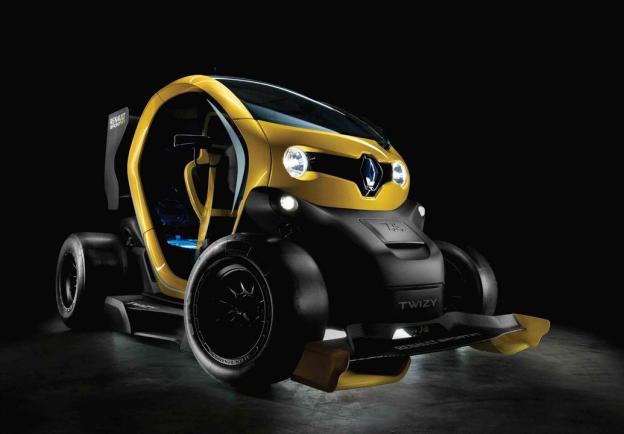 It’s nice to know that some car companies have a sense of humor.

When Renault announced that it had built an electric concept car inspired by Formula One, it triggered visions of carbon fiber-bodies supercar poised to take on the Ferrari LaFerrari or McLaren P1.

Instead, we got this: the Twizy Renault Sport F1.

That’s right, Renault sent its golf cart-like electric city car to its Renault Sport Formula One team for some tweaks. Does a car like this really need a front splitter and a huge rear spoiler? No. Is it funny as hell? Yes.

What isn’t a joke is the F1-style Kinetic Energy Recovery System (KERS). Storing energy recovering from braking in a 36,000 rpm flywheel, KERS ups the Twizy’s output from 17 horsepower all the way to 97 hp – but only for 13 seconds at a time.

As a result, the Twizy’s top speed climbs from 53 mph to a blistering 68 mph. Renault says the Twizy Renault Sport F1 will accelerate as quickly as the Megane Renaultsport 265 hot hatchback.

Why build this cartoonish tribute to F1? Renault hopes to show that F1 tech has a place in future road cars, and this is an entertaining way to show that off.

“We always said we wanted to create F1-derived technology that was road relevant,” said Jean-Michel Jalinier president and managing director of Renault Sport F1. “Hopefully, this Twizy will make a few people smile while also making a serious point.”

So although Renault has no plans to put the Twizy Renault Sport F1 into production, it could hint at the possibility of F1 technologies like KERS finding their way into production cars.

The fact that Renault was able to fit a functioning KERS system into such a small vehicle is already an encouraging sign. F1 World Champion Sebastian Vettel’s new gig as Infiniti’s “Director of Performance” also indicates a desire to incorporate F1 tech into road cars across the company.

So while the Twizy Renault Sport F1 might seem like a joke, it could have serious implications.

What do you think of this comedic F1 homage? Tell us in the comments.