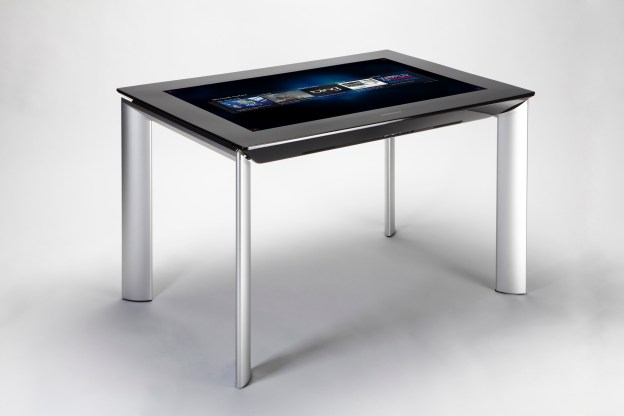 Have you always wanted a Microsoft Surface but haven’t had the $14,000 to buy one? Starting today you are able to pre-order the new SUR40, aka: Surface 2, for about half that price. While it is still a very expensive piece of hardware, it is also one of the most impressive pieces of hardware we have seen.

The Surface was first announced in 2007, and was a massive table sized computer with a built in camera powered touch screen. The latest version that was announced at CES is built by Samsung, and is thin and light enough to be hung on a wall. The SUR40 has a 40 inch screen under a massive piece of Gorilla Glass. Samsung was able to shrink the size of the SUR40 thanks to something called PixelSense, which turns an LCD display to also act as a camera. This allows the Surface to not only act as a touchscreen, but also to see what is touching the screen.

Under the screen there is a dual-core AMD Athlon processor paired with an AMD GPU. This combo allows Surface to handle up to 50 simultaneous touch points, and still output a pretty picture. The SUR40 is available for pre-order through Samsung, but don’t expect to see these hitting retail stores. At this price point it will most likely remain a special order product with the focus on commercial installments.

We have included a video below that shows off just how impressive the SUR40 is in action. Sadly the SUR40 will not be available until early 2012, so you won’t be able to put it on your holiday wish list this year.