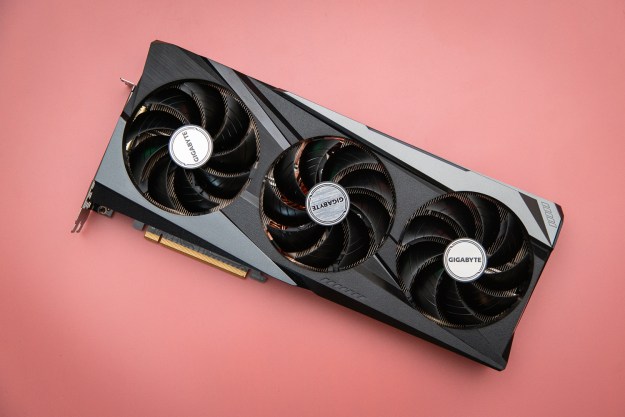 Late-gen refreshes are an opportunity for GPU vendors to take another swing at an architecture they’re about to retire. Refreshes like this benefit from time, allowing companies like AMD and Nvidia to pack in extra power, extra cores, and more features based on what they’ve learned since the initial launch.

Calling it an overclocked RX 6900 XT would be too flattering, and my benchmarks show that clearly. It’s a graphics card that only makes sense in a sales meeting room, offering little to no advantage over the base RX 6900 XT while still carrying a $100 increase in price.

AMD has new graphics cards available now that offer a much better value. Make sure to read our RX 7900 XTX review for a breakdown of performance.

For a late-gen refresh like the RX 6950 XT, it all comes down to specs. And AMD’s offering isn’t too enticing. Overall, the RX 6950 XT is largely the same graphics card as the RX 6900 XT. It has the same number of cores, the same 16GB of GDDR6 memory, and the same 256-bit memory bus.

The differences come in clock and memory speed. The 16GB of GDDR6 jumps from 16Gbps to 18Gbps, increasing the memory bandwidth by a solid 12.5%. That’s a respectable increase, but memory bandwidth isn’t a big issue for games. And in content creation workloads, the massive bandwidth afforded by GDDR6X on the RTX 3090 is a better option.

Otherwise, the RX 6950 XT brings a minor 4.2% boost in the game clock speed. That’s slightly higher than the 4% boost on the maximum boost clock. You can easily achieve that boost if you overclock your graphics card, and many third-party RX 6900 XT models even match the clock speed of the stock RX 6950 XT.

The only reason to upgrade to an RX 6950 XT is simply because you want to.

That’s all the worse considering GPU prices have largely returned to normal — especially for the RX 6900 XT. At the time of writing, I found several models available on Newegg at or below the $1,000 list price. Based on the spec sheet and my benchmarks, the RX 6950 XT is basically the same card as the RX 6900 XT. With increased supply and falling prices, the only reason to upgrade to an RX 6950 XT is simply because you want to.

That’s for AMD’s GPU overall, but I don’t want to discredit the Gigabyte RX 6950 XT Gaming OC I reviewed. It’s an excellent card. The Windforce cooling system is in full swing, keeping temperatures low even with increased power draw, and the branding is sleek and minimal. You even have a bit of RGB lighting for the Gigabyte logo, which you can configure through Gigabyte’s RGB Fusion software.

You can see how the cards stack up on average above. All of my tests were run with a Ryzen 7 5800X3D and 32GB of DDR4-3200 memory. I ran tests from 1080p to 4K, but the results in the chart above and table below are for 4K with the highest graphics preset.

Just half of a frame separates the RX 6900 XT from the RX 6950 XT, and that’s in favor of the weaker card. It’s not too surprising considering you can easily boost the RX 6950 XT up to 2,100MHz (the world record is somewhere around 3,300MHz). Clock speed variations mean that this card basically performs about as well as the RX 6900 XT, just for $100 more.

You can see my full results in the table above. There isn’t much to highlight outside of ray tracing performance. In Cyberpunk 2077, the RX 6950 XT massively underperforms compared to Nvidia’s cards, just like the RX 6900 XT. AMD’s current-gen cards aren’t great when it comes to ray tracing — read our RX 6500 XT review for another example — and the RX 6950 XT doesn’t change that.

Radeon GPUs always take a back seat to GeForce ones in content creation tasks, and the boosted clock speed and slightly higher memory bandwidth on the RX 6950 XT doesn’t do enough to change that. Compared to Nvidia’s best, the RX 6950 XT is clearly behind.

It held up OK in Premiere Pro, but that app stresses your CPU and RAM just as much as it does your GPU. In a graphics-focused benchmark like Blender, the RX 6950 XT gets slaughtered. Nvidia has CUDA and Optix rendering, which are significantly faster than the OpenGL rendering the RX 6950 XT has access to.

That’s not to mention the memory on the RTX 3090 and RTX 3090 Ti. It uses GDDR6X memory, which tops out much higher than the GDDR6 the RX 6950 XT has available. If you’re serious about GPU-bound content creation work, it’s best to stick with Nvidia right now.

Gigabyte’s RX 6950 XT Gaming OC is great at keeping things cool. In a FurMark stress test, the card peaked at 67 degrees Celsius on an open-air test bench. That’s great, and even in one of the best PC cases, it offers plenty of headroom. What was more interesting was the power draw.

AMD is stressing the RX 6950 XT’s efficiency advantage, and it has an advantage.

AMD rates the wattage at 335 watts, but my card topped out at 290W. That was with the default profile set in Radeon Software. Even with the automatic overclocking feature, the card never drew more than 308W. I’d rather a power rating be too high than too low, but my results illustrate just how similar the RX 6950 XT is to the 300W RX 6900 XT.

Just like the base cards, AMD is stressing its efficiency advantage. And it has an advantage. The RTX 3090 draws 350W on its own — and based on my experience, the card can climb to near 400W even without overclocking. Meanwhile, the RTX 3090 Ti goes up to a massive 450W, easily sucking down more power than any other component you can put in a PC. AMD’s flagships look quaint by comparison.

The RX 6950 XT is a graphics card that doesn’t need to exist. It’s a lot like Nvidia’s 12GB RTX 3080 — a refresh meant to push prices up without offering any clear performance improvements. AMD already achieved a graphics card that can beat the RTX 3090, and it’s the RX 6900 XT, not this late-gen refresh.

Although it’s a disappointing release, the RX 6950 XT is still a supremely powerful graphics card. It should last several years before you need an upgrade, especially considering its modest power requirements.

No, buy the RX 6900 XT instead. It’s a great gaming graphics card that’s now selling for list price. If you want more power for ray tracing and content creation, however, Nvidia’s GPUs are still winners.

Topics
The best gaming PCs for 2023: Dell, Origin, Lenovo, and more
DirectX 12 vs. DirectX 11: which is best for PC gaming?
What is DirectX, and why is it important for PC games?
The most common motherboard problems, and how to fix them
15 years later, the MacBook Air could soon have its best year ever
How to watch Super Bowl 2023 on your computer
Microsoft Word vs. Google Docs
Turns out DirectStorage isn’t killing frame rates in Forspoken after all
Best laptop deals: Save on Apple, Dell, HP and Lenovo
Wi-Fi not working? Here’s how to fix the most common problems
The best Chromebooks for 2023
Best microSD cards in 2023: top picks for your computer, camera, or drone
The best game-streaming services for 2023