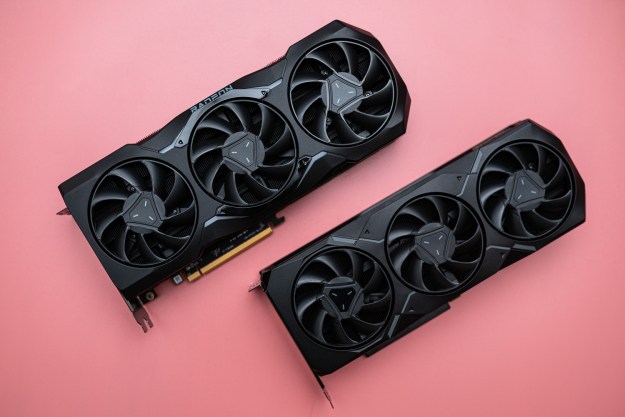 It’s not often I get disappointed as a reviewer, but writing this RX 7900 XTX review left me a bit disappointed. That might surprise you if you’ve seen the score they’ve earned and the long list of pros these cards bring — AMD’s first Radeon RDNA 3 GPUs are among the best graphics cards you can buy right now. But against a rising tide of GPU prices, AMD was positioned to correct course, and these cards don’t fully deliver the goods. Value is back in a big way with the XTX model, but those looking for the best performance won’t find it with AMD’s latest cards.

The RX 7900 XTX and RX 7900 XT are great 4K GPUs, and the XTX model is a much better value than Nvidia’s competing RTX 4080 showcasing what AMD’s other RX 7000 GPUs may be able to offer in the future. Still, AMD’s latest GPUs are slightly behind in a number of benchmarks, and their ray tracing, although improved, isn’t able to go toe-to-toe with Team Green.

On the spec sheet, the RX 7900 XTX and RX 7900 XT are clearly high-end GPUs. The XTX model sports 24GB of GDDR6 memory, putting it on the level of Nvidia’s RTX 4090, while the XT model cuts that down to 20GB. That’s still far ahead of the 16GB available on the RTX 4080, though AMD is using slower GDDR6 memory compared to Nvidia’s latest GPUs.

The inclusion of DisplayPort 2.1 is a big deal, specifically for VR gamers and those wanting to drive the first 8K gaming monitors once they’re here. Nvidia stuck with DisplayPort 1.4 for its latest GPUs, which is still enough to drive current high-end monitors like the Samsung Odyssey Neo G8. That standard may show some limitations as time goes on, however.

Power consumption is high, though not as high as the 450 watts the RTX 4090 demands. Interestingly, AMD pushed the RX 7900 XT a bit harder for release. The card originally had a total board power of 300 watts, but the final design pushes that to 315W for slightly higher performance.

The interesting notes come in the compute units. Each compute unit gets two ray tracing accelerators and one AI accelerator. This is different than Nvidia’s design, which splits out AI cores and ray tracing cores separately. These AI accelerators don’t have a clear use right now, outside of machine learning. However, they could have implications down the road with AMD’s  FidelityFX Super Resolution (FSR 3).

Rasterized performance is solid, but AMD took a distant back seat in the previous generation with ray tracing. AMD is still behind, but the margins compared to Nvidia are thinner than they once were. In 3DMark’s Port Royal ray tracing benchmark, the RX 7900 XTX scored 14,913, placing it about 17% behind the RTX 4080. That’s a solid lead for Nvidia, but AMD is still offering around a 45% improvement in ray tracing performance compared to its previous generation. That far outpaces the rasterized gains.

Although it’s never good to put too much stock in synthetic performance, these two 3DMark runs are fairly representative of what you can expect with the RX 7900 XTX and RX 7900 XT. Without ray tracing, the XTX is neck and neck with the RTX 4080, but with ray tracing, the delta slips to somewhere around 5% to 10%.

Some games show AMD’s new cards in a very positive light. In Cyberpunk 2077, for example, the RX 7900 XTX actually beats the RTX 4080 by a few frames while the RX 7900 XT is only a frame behind. That’s a lead for AMD while charging less for its flagship GPU. It’s hard to argue with that.

There are low points as well. Forza Horizon 5 used to be a game where AMD dominated, but its latest cards barely provide any boost over the previous generation. AMD takes a back seat in Horizon Zero Dawn, as well, which is another AMD-promoted title.

It seems AMD’s latest cards favor large, open-world games where features like Smart Access Memory (SAM) can flex their muscle. Cyberpunk 2077 is one example, but the RX 7900 XTX also managed a lead over the RTX 4080 in Red Dead Redemption 2. It matched Nvidia’s GPU in Assassin’s Creed Valhalla as well.

AMD is trading blows well with Nvidia, but that’s stacked up against the RTX 4080. That card is a bad value, and I have to wonder how this situation would have been different if Nvidia hadn’t gone forward with the $1,200 price on the RTX 4080. Rumors suggest that price may drop soon, however.

AMD has been in a distant second place with ray tracing ever since RX 6000 GPUs were introduced. Although the RX 7900 XTX and RX 7900 XT help close that gap, Nvidia still shows a commanding lead. That lead can be important in some games, but unlike the previous generation, ray tracing is an option on AMD’s latest GPUs — even if they aren’t showstoppers on the RT front.

You can’t separate ray tracing from upscaling, and AMD offers its FidelityFX Super Resolution (FSR) upscaling in a wide swath of games. It’s not quite a prolific as Nvidia’s Deep Learning Super Sampling (DLSS), but the second version of FSR is mighty impressive. It can provide similar performance gains as DLSS, and it doesn’t look terrible in the process (unlike the first version of FSR).

Games are slowly updating to FSR 2, and we’ve seen titles like Forza Horizon 5 adopt the tech well after launch. On the opposite end, some games are still using the first version. Call of Duty Modern Warfare 2 is a recent example, though it’s possible the game will get an FSR 2 update at some point.

Compared to Nvidia, the main point of contention now is DLSS 3. This version introduces frame generation to RTX 40-series GPUs, multiplying performance in even the most demanding games. DLSS 3 isn’t perfect, but it works shockingly well to boost performance. AMD is working on FSR 3, which will include frame generation as well. We just don’t know anything about it right now.

The big question is if the third version of FSR will leverage the AI cores inside the RX 7900 XTX and RX 7900 XT for frame generation. FSR has always stood out due to the fact that you can use it with most graphics cards, but it’s possible future versions will need dedicated hardware. It’s hard to say right now, as FSR 3 is still likely many months away.

Although FSR 2 is highly competitive with DLSS, it’s nowhere close to DLSS 3. We’re in a similar situation as the previous generation. AMD can go toe-to-toe in rasterized performance, but ray tracing and features like DLSS 3 still help Nvidia’s cards stand apart from the pack.

AMD hasn’t made details like temperature and fan speed available in third-party tools yet, so I have to rely on  my subjective experience with the cards, plus a bit of power testing. For temperatures, I saw the card ramp up to near 80 degrees Celsius on an open-air test bench. This is likely due to AMD’s reference design, though. It doesn’t vent air out the back, instead forcing it out the side through a massive fin stack. Third-party cards will likely have much better thermal performance (and possibly higher performance overall).

The byproduct of this design is increased fan noise. The RTX 4090 and RTX 4080 are almost silent in operation, even while the fans are spinning. The RX 7900 XTX and RX 7900 XT are not. In particular, the RX 7900 XTX would ramp up very loudly under any demanding workload, bringing back memories of a few generations ago where every GPU was loud.

You can deal with the fan noise, but the reference design is still relatively loud and hot. I imagine the larger coolers available from board partners will change this dynamic, though, so keep that in mind if you’re picking up a card from one of AMD’s various partners.

For power, the RX 7900 XTX stuck around 330W during a run of Cyberpunk 2077 at 4K, peaking at  370W for a brief moment. That’s below the official spec, but the RTX 4090 only drew 360W during this same run, while the RTX 4080 topped out at 276W. Although AMD’s latest cards consume slightly less power compared to Nvidia overall, Nvidia still has the lead in efficiency.

A great value, with caveats

The RX 7900 XTX is a great value. If you want fantastic 4K gaming performance and don’t mind lower ray tracing performance, it’s the card to buy over the RTX 4080. Another caveat is DLSS 3. It’s true that the RX 7900 XTX beats the RTX 4080 is raw performance per dollar, but the $200 gap doesn’t seem as large when you factor in ray tracing and frame generation with DLSS 3 (especially in demanding games like Portal RTX).

I can’t recommend the RX 7900 XT, but that shouldn’t come as a surprise. At only $100 less than the XTX model, it was clear from the onset that the XT model would offer a far worse value. And it does. Buy the RX 7900 XTX instead.

Although there is a group of gamers that want features like DLSS 3 and extra ray tracing performance, there’s also a large group that doesn’t. For that bunch, the RX 7900 XTX is easy to recommend, even if it doesn’t wipe the floor with the RTX 4080 like AMD suggested it would.

Topics
Nvidia RTX 40-series graphics cards: news, performance, and more
Intel’s future GPUs just got revealed in a major leak
AMD CES 2023: Ryzen 9 7950X3D, mobile Ryzen 7000, and more
CES 2023: AMD’s next-gen laptop GPU could beat a desktop RTX 3060
Best laptop deals: Save on Apple, Dell, HP and Lenovo
Wi-Fi not working? Here’s how to fix the most common problems
The best Chromebooks for 2023
Best microSD cards in 2023: top picks for your computer, camera, or drone
The best game-streaming services for 2023
Ranking all 12 versions of Windows, from worst to best
If you think PCs are dying, you haven’t been paying attention
What is ChatGPT Pro? Everything we know about its response to capacity issues
I built a couch gaming PC that puts the PS5 to shame — and you can too