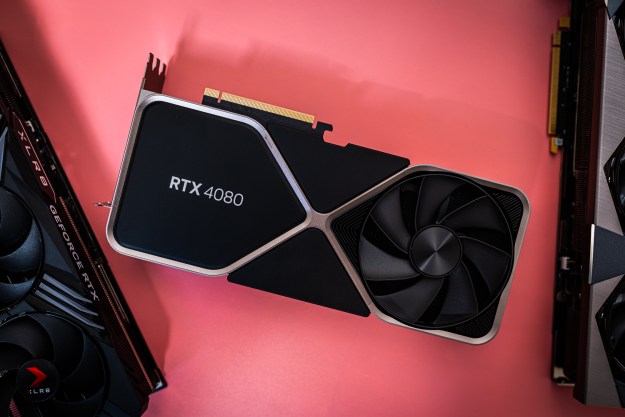 Nvidia’s RTX 4080 isn’t a showstopper. In terms of raw performance, it’s still one of the best graphics cards you can buy, only taking a back seat to the behemoth RTX 4090 in performance. But it isn’t the game-changing GPU that Nvidia’s recent flagship was.

In terms of strengths, the RTX 4080 is an incredible showcase of the efficiency of Nvidia’s new Ada Lovelace architecture. But on the other end, it’s far behind the RTX 4090 in performance despite being close in price. Features like DLSS 3 still make the RTX 4080 shine in the wider sea of graphics cards available today, but buyers interested in a $1,000-plus GPU have a tough choice when the RTX 4080 is stacked up against the RTX 4090.

In the previous generation, Nvidia experienced too much crowding in performance — many high-end models were within a few frames of each other, despite large differences in price. Now, Nvidia has the opposite problem.

As the second card in Nvidia’s Ada Lovelace generation, we can finally compare specs. Although the RTX 4080 is 25% cheaper than the RTX 4090, it comes with a significantly cut-down GPU. The RTX 4080 has 41% fewer CUDA cores, as well as 47% fewer ray tracing cores and Tensor cores. Those lesser core counts translate into performance differences, as I’ll dig into later.

The core count differences are the most stark difference. Otherwise, the RTX 4080 comes with 8GB less of GDDR6X memory compared to the RTX 4090, as well as a smaller 256-bit memory bus. The clock speed is slightly lower at base as well, though the two cards are nearly identical when boosting.

For testing, all of my results were gathered with a Ryzen 9 7950X with 32GB of DDR5-6000 memory. I used Gigabyte’s Aorus Master X670E with the latest BIOS as well. Keep that in mind, as early AM5 BIOS versions can show performance issues with RTX 40-series GPUs.

Before getting into the gaming benchmarks, I ran some synthetic tests to get a broad overview of the RTX 4080’s performance. It showed a massive 28% improvement over the RTX 3090 Ti in 3DMark Time Spy, which isn’t surprising considering the result I recorded with the RTX 4090. The surprising note is that the RTX 4080 is still 19% behind of the RTX 4090.

That’s great performance considering the core differences, but not all benchmarks are as favorable. In 3DMark Port Royal, which focuses on real-time ray tracing performance, the RTX 4080 is 30% behind the RTX 4090. Nvidia’s latest GPU still shows impressive gen-on-gen gains, however, with a 41% lead over the RTX 3090.

In a rendering test like Blender, the RTX 4080 shines due to its CUDA acceleration. In gets close to double the performance of the RTX 3090 in some cases, though it’s still around 25% slower than the RTX 4090. The performance is great, but the real winner here is CUDA. AMD’s cards are far behind even Nvidia’s last-gen GPUs, so Team Green remains the way to go for intense 3D modeling and rendering.

Even without upscaling, the RTX 4080 is a 4K graphics card. You should expect it to maintain above 60 frames per second (fps) in the most demanding games available today without ray tracing and even push above 100 fps for high refresh rate monitors in games like Horizon Zero Dawn. It’s a powerful GPU, just not as powerful as I was expecting based on the performance of the RTX 4090.

Even with thinner margins, the RTX 4080 picks up some impressive wins, particularly in the AMD-promoted Assassin’s Creed Valhalla. AMD’s RX 6950 XT dominated this title in the previous generation, but the RTX 4080 blows that card away with a 31% lead. That’s not true in all AMD titles, though. In Forza Horizon 5, the RTX 4080 is just 12% ahead of the RX 6950 XT (though still a massive 38% ahead of the RTX 3090 Ti).

You can cycle through the rest of my benchmarks above, but there’s nothing too interesting to point out. At 1440p, the RTX 4080 is given a little more room to breathe, which makes it stack up to the RTX 4090 in a way its price would suggest. Compared to previous-gen GPUs, though, the card shows similar performance gains as it does at 4K.

Nvidia leads the ray tracing charge in PC gaming right now, but the RTX 4080 isn’t the best showcase of that. The card still tops the RTX 3090 Ti in performance, but the margins are thin in some cases, discrediting Nvidia’s bold claims about its new Shader Execution Reordering (SER) feature.

SER basically changes the order of operations for ray tracing shader computations, better utilizing the available hardware to get ray tracing instructions in motion faster. It requires hardware-accelerated GPU scheduling in Windows (on by default in Windows 11), but it doesn’t seem like SER is doing much for the RTX 4080.

It’s important to remember that the RTX 4090 has nearly twice the cores of the RTX 4080. SER clearly does some work to improve ray tracing performance, but the my results suggest SER scales with core count. As we go down lower in Nvidia’s new generation, I’m worried that ray tracing performance will suffer. I’m sure we’ll still see large generational improvements, but likely not on the level of the RTX 4090.

Although performance isn’t off the charts, the RTX 4080 has a big advantage over last-gen offerings: Nvidia’s third iteration of Deep Learning Super Sampling (DLSS). DLSS 3 is two parts. One is DLSS Super Resolution that’s available to all RTX GPUs, and the second is DLSS Frame Generation, which only works on RTX 40-series GPUs.

Basically, DLSS 3 on an RTX 40-series GPU can generate a new frame every other frame, theoretically doubling your frame rate without any performance penalty. The situation is more complicated in reality, but DLSS 3 is still impressive. In 3DMark’s Port Royal at 8K, for example, the RTX 4080 could only manage a 1 fps average (and that’s with some generous rounding). Turn on DLSS 3 with Frame Generation and the Ultra Performance mode, and you’re looking at a 700% increase. This isn’t a real-world test, but it’s a good showcase of what DLSS 3 is capable of.

In a game like A Plague Tale Requiem at 4K, the gains are more reasonable, but still impressive. With DLSS’ Auto mode, the feature boosted frame rates by 144%. Super Resolution on its own is impressive as well, offering nearly an 80% boost over native resolution.

The same is true in Cyberpunk 2077 with ray tracing turned on. The RTX 4080 goes from a measly 29 fps average to over 110 fps with DLSS — more than a 290% increase over native resolution.

DLSS 3 isn’t perfect, though, as I went deep on in my RTX 4090 review. Image quality can occasionally suffer, which you can see in a slate of games I captured footage of in the video below.

That’s around 60W lower than the RTX 3080 Ti and RTX 3090, as well as nearly 140W below the RTX 3090 Ti. Although it’s true that Nvidia’s most recent GPUs draw a lot of power, they’re highly efficient compared to the previous generation.

The card stayed cool, too, peaking at 63 degrees Celsius throughout my test suite for the Founder’s Edition design. That’s just one degree below the RTX 4090, but a solid five degrees cooler than the Founder’s RTX 3090. I should note that I tested on an open-air bench, so temperatures will be slightly higher in a PC case.

Will the RTX 4080’s power connector melt? I don’t know. Following the release of the RTX 4090, reports flooded in about melting 12-pin power connectors. This is caused by the power connector not having enough clearance coming out of the GPU, causing some pins to loosen and melt the plastic on the connector.

I had two RTX 4090s running around the clock for a couple of weeks during the review period, and the connectors are fine. Similarly, I tested three RTX 4080s and all of the power connectors are still intact. That doesn’t mean the RTX 4080 won’t have the same problem that the RTX 4090 has, though. The Founder’s Edition is the same size as the RTX 4090, and both the MSI Suprim X and PNY XLR8 Gaming are the same size as their RTX 4090 counterparts. That means most cases will still bend the connection.

However, reports say that only some connectors are even capable of melting. There appears to be two manufacturers, one of which doesn’t have as secure of a latching mechanism. Other reports say that some connectors use 150-volt wire while others use 300V, and only the 150V versions fail. Regardless of the reason, the issue doesn’t affect all 12-pin adaptors.

Although reports of melting connectors continue to roll in, Nvidia has promised “an expedited RMA process” for customers. And the number of people affected looks small, so I wouldn’t worry too much about the power connector melting if you pick up an RTX 4080.

At the $1,200 mark, there’s no better option right now. If you shop in-stock cards available today, the RTX 4080 is the one to get. However, as RTX 4090 stock replenishes and AMD releases its next-gen GPUs, it will be important to reevaluate where the RTX 4080 sits.