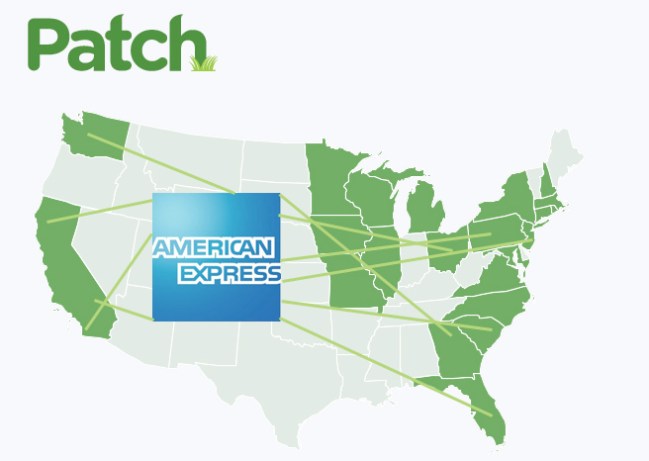 Patch is the “hyperlocal” segment of the newly-formed AOL Huffington Post Media Group, with more than 800 neighborhood blogs and 850,000 businesses featured on the network. Through this online community, Patch Deals will offer customers the ability to save cash at local merchants. And, in turn, local merchants will be able to advertise their deals in a “streamlined, effective way,” the press release reads.

Basically, it’s exactly the same service that Groupon and LivingSocial offer, but with the AmEx tie-in to give it that little bit of added validity and accessibility.

To utilize the service, Patch users “may be offered Serve accounts” which would include a co-branded card that users can simply swipe to receive their discounted goods and/or services. This means “no coupons to print or codes to remember,” says Patch PR.

At least, that’s what it looks like at first glance. According to BNet‘s Erik Sherman, Patch Deals could be “more economically attractive for merchants because there’s no need for them to share revenue, and more convenient for customers, with a no-coupon form of in-person redemption, as well as online purchasing.” All of this adds up to profit for Patch/AmEx and loss of revenue for Groupon, LivingSocial, and the slew of (other) clones out there.

Patch Deals is currently only available in six communities, so we’ll have to wait to see whether the service can make it on the small scale before we can judge it on Groupon’s level.

Best Prime Day Chromebook Deals 2022: What to expect in July

Best Presidents Day Chromebook sales and deals for 2022: What to expect