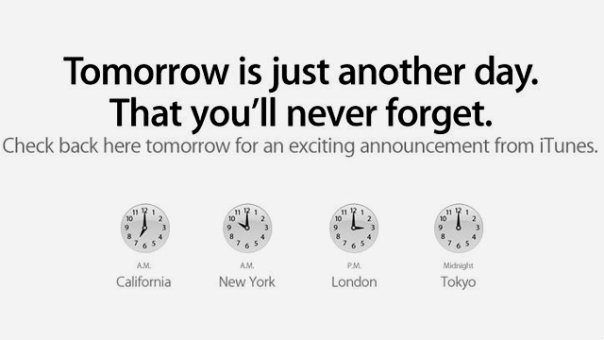 Apple wants you to know that “Tomorrow is just another day. That you’ll never forget.” The mysterious tagline is followed by a note to check back on its site tomorrow for an announcement concerning iTunes.

Seeing as Apple failed to make any mention of its recent integration with Ping and the strong language it uses to tease the unknown iTunes update, we’re kind of at a loss here. There is speculation Apple will finally launching iOS 4.2, which supports iTunes hyped AirPlay feature, but with such an iTunes specific announcement, that’s probably just wishful thinking.

It seems like there’s no agreement on what this could be, so for now we’ll leave you with some of the more concrete rumors of what Apple and iTunes have in store for users tomorrow:

The announcement is scheduled for 10 a.m. (EST) tomorrow, so check back in the morning for our take.

Apple Labor Day Sales 2022: Best deals to shop now
How to take a screenshot on your Mac in 2022
How to convert Excel files to Google Sheets
How to Delete or Deactivate Slack Account
Best Dell XPS Deals: Up to $600 off top-rated laptops
IPVanish Free Trial: Try it for a month, no strings attached
Adobe Free Trial: Try Creative Cloud for free
Why AMD doesn’t need to beat the RTX 4090 to overtake Nvidia
Why the RTX 4080 12GB feels a lot like a rebranded RTX 4070
Microsoft confirms Surface event for October 12, Surface Pro 9 expected
How much does the RTX 4090 cost? RTX 40-series buying guide
Hackers may be hiding in plain sight on your favorite website
Pico 4 VR headset is here to take on the Meta Quest 2