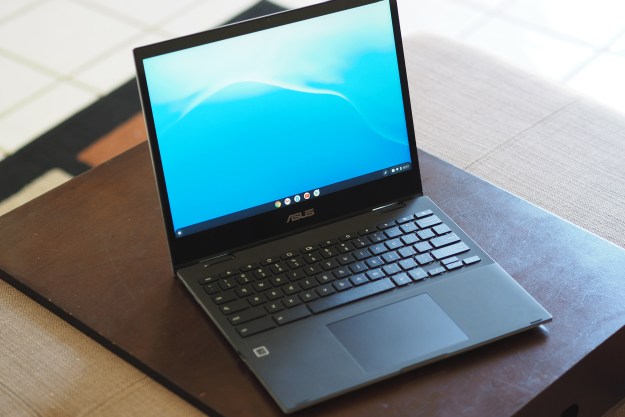 “The Asus Chromebook Flip CM3 isn't the fastest Chromebook in the world, but its price is unbeatable.”

Sometimes, a product comes along that’s defined by one specific characteristic. In the case of the convertible 2-in-1 Asus Chromebook Flip CM3, that characteristic is its price. The $330 starting price will be extremely attractive to those looking for a cheap way to access the internet. Budget laptops have their place, especially for students.

I reviewed the $330 Asus Chromebook Flip CM3 configuration with a MediaTek MT8183 CPU, 4GB of RAM, 64GB of eMMC storage, and a 12-inch (1366 x 912) IPS display in the 3:2 aspect ratio. There are certainly corners to be cut in reaching this low of a price. But more often than not, the Asus Chromebook Flip CM3 makes the right sacrifices for a cheap student laptop.

The Asus Chromebook Flip CM3 is a mix of a silver aluminum alloy lid and a matching plastic chassis. It uses the same electro-deposit coating as the more expensive Asus Chromebook Flip C536, which creates a ceramic-like texture on the lid. There’s also the same in-mold roller process used on the C536 that gives the Chromebook Flip CM3’s all-black keyboard deck a velvety feel that makes the palm rests surprisingly comfortable. You don’t expect this kind of technology with such an inexpensive laptop, and it confers an attractive if simple aesthetic that looks like it should cost quite a bit more.

The build quality is equally impressive, with the lid bending only slightly under pressure and the keyboard flexing a bit if you press hard enough. Again, the Chromebook Flip CM3 punches above its weight class, offering a surprisingly robust build. It may not be quite as well-built as the Chromebook Flip C536 (which itself was a step behind the Asus standard) or the Acer Chromebook Spin 713, but both of those laptops cost around $600. The Lenovo Chromebook Flex 5 is another 2-in-1 that’s around the same price as the Chromebook Flip CM3, and it’s made completely of plastic but still feels solid.

This is a small laptop, albeit not as small as it could it. It’s built around a 12-inch 3:2 display, which should result in a tiny chassis, but the bezels are large and add to the width and depth. Still, it’s smaller than 13-inch and comes in at 0.64 inches thick and 2.51 pounds. Overall, it feels like a thin and light laptop that’s meant to be easily carried around.

Connectivity is limited to a single USB-C port, a USB-A port, a 3.5mm audio jack, and a microSD card reader. Wireless connectivity includes Wi-Fi 5 and Bluetooth 4.2, both of which are a generation behind.

Remember when I asked about which corners were cut? Well, the simplest answer here is: Performance. The Asus Chromebook Flip CM3 uses a MediaTek MT8183 ARM CPU running at 2GHz. While this processor has been optimized for Chrome OS, there’s only one way to characterize it. It’s slow.

Consider the 2-in-1’s Geekbench 5 scores, a low 299 in single-core mode and 1,407 in multi-core mode. The closest comparison I could find in our database is the Asus Chromebook Flip C436 with a Core i3-1011U CPU, which scored 938 and 1,653. The Lenovo Chromebook Flex 5, also running the Core i3-1011U, scored 975 and 1,649. Clearly, the MediaTek processor does better running multi-threaded apps than single-threaded ones.

In real-life use, I didn’t find the machine as slow as these benchmarks imply. Things got choppy if I opened too many browser tabs and had some Android apps running in the background, but with a more reasonable workload, the Chromebook Flip CM3 was perfectly usable. Given the price, it makes for a decent second machine that’s easy to move about, and for users who just need to browse the web and check email, the performance is acceptable.

Gaming didn’t go well, though. I tried out Asphalt 9, my go-to game for testing Chromebooks, and it wasn’t a fun experience. I’d stick with simpler, less graphics-intense games on the Chromebook Flip CM3.

The Asus Chromebook Flip CM3 enjoys a 12-inch IPS display in the productivity-friendly 3:2 aspect ratio and with a 1366 x 912 resolution. The taller aspect ratio is another surprise in such an inexpensive laptop — it’s a real boon for anyone who can appreciate more vertical space and less scrolling. The resolution is lower at just 1366 x 912, but that’s still sharp given the small screen size.

The difference is hardly noticeable with the naked eye, but a 13.3-inch 1080p screen is technically 165 pixels per inch compared to the 137 ppi of the Asus Chromebook Flip CM3.

I can’t test Chromebooks with my colorimeter, and so all I can provide is my subjective opinion. And my opinion is that this is — once again, surprisingly — a vibrant display for such an inexpensive machine. It’s not terribly bright, but it was able to overcome all the interior ambient lighting I threw at it. I couldn’t use it outside in direct sunlight, but that’s not unusual. The colors were pleasant and seemed accurate when I used the Chromebook Flip CM3 side by side with other more expensive . Photos and videos looked great without being too light or too dark. The contrast wasn’t as high as I’d like, but black text on white backgrounds wasn’t grayish, as it is on many budget .

I liked this display at least as well as the ones on the more expensive Asus Chromebook Flip C536 and Acer Chromebook Spin 713. It doesn’t rank up there with the best, like the premium display on the Google Pixelbook Go. But once again, you’re paying twice as much money to get that higher quality. Asus did a great job of equipping the Asus Chromebook Flip CM3 with a display that’s sure to please all but the most demanding creative professionals — who aren’t likely to buy this laptop, in any event.

The small chassis has one unfortunate byproduct, and that’s a very cramped keyboard. The keycaps are tiny, and there’s not a ton of spacing between them. If you have larger hands, you’ll probably have some trouble typing on this keyboard. The switch mechanism provides plenty of travel, but it’s a bit dull without the clickiness that contributes to precise typing. The bottoming action is a bit abrupt, and I’d definitely rate this keyboard as one of the less comfortable I’ve used. As I mentioned above, the palm rest is amazingly comfortable, thanks to the special coating, but the keyboard doesn’t follow suit. Note that the keyboard isn’t backlit, which is disappointing.

The touchpad is better, being larger than expected, thanks to the extra palm rest space afforded by the taller display. It’s smooth and responsive, providing precise control over the cursor and supporting all the usual Chrome OS multitouch gestures.

The screen is touch-enabled, as is usual for 2-in-1s, and I found it to be finicky. I sometimes had to tap two or three times to get it to respond, especially when I was trying to engage smaller on-screen buttons. It’s not egregious, but it did detract from the usefulness of the touch panel. The Chromebook Flip CM3 supports an optional active pen with 4,096 levels of pressure sensitivity, and that was included with my review unit. I found it to be as good as any other Chromebook pen I’ve used, supporting the suite of Chrome OS pen tools with plenty of precision.

The MediaTek processor might be slow, but it’s also efficient. The Asus Chromebook Flip CM3 equipped a 32 watt-hour battery, which isn’t particularly large even given the 12-inch low-resolution display.

Even so, the 2-in-1 lasted for almost 12.5 hours in our web browsing test, which is a strong score. The Asus Chromebook Flip C536 managed just 6.75 hours in this test, while the Acer Chromebook Spin 713 went for 8.45 hours. I went back a couple of years and couldn’t find a Chromebook that lasted longer.

In our video test that loops through a local full HD movie trailer, the Asus Chromebook Flip CM3 lasted for just over 12 hours. It’s not uncommon for Chrome OS machines to last longer in the web browsing test than the video test, unlike Windows 10 . Again, the Chromebook Flip CM3 outlasted the comparison by a few hours.

Overall, the Chromebook Flip CM3 offers up impressive battery life for such a small machine. If you’re using it as a primary system, you’ll get a full day’s work out of it, and if it’s a secondary laptop, you’ll get days of use.

The Asus Chromebook Flip CM3 is a budget Chrome OS 2-in-1 that exceeds the expectations established by its low price. It’s slower than I’d like, but it has great battery life and a solid, comfortable chassis. The keyboard could be larger and the touch screen a little more responsive, but the touchpad and active pen are excellent.

I wouldn’t recommend buying the Asus Chromebook Flip CM3 as your primary work machine unless your needs are minimal. But as a second laptop to carry around and use for web browsing and checking email or as a starter student laptop, it’s a great option.

The Lenovo Chromebook Flex 5 is another Chrome OS 2-in-1 that’s similar in price and provides similar performance. Its build quality is a little better, but its battery life can’t match up.

You can jump up in price a bit and consider the Acer Chromebook Spin 713, which is around $600 but is much faster and offers a sharper 3:2 display.

Finally, as we usually recommend, Google’s Pixelbook Go should be on your list if you don’t need the flexibility of a 2-in-1. It’s more expensive, but it also has long battery life and a stunning display that can’t be beaten.

Yes. As a secondary laptop, the Asus Chromebook Flip CM3 is a tremendous bargain that’s worth the small investment.

Topics
Best gaming laptop deals: Save on Alienware, Asus and more
The best Chromebooks for 2023
Best laptop deals: Save on Apple, Dell, HP and Lenovo
HP Envy x360 13 vs. Dell XPS 13: the best tiny laptop?
The Galaxy Book 3 Ultra is Samsung’s most powerful laptop ever
Nvidia may have another monster GPU in the works, and the price could be outrageous
AMD’s Ryzen 9 7950X3D pricing keeps the pressure on Intel
What is ChatGPT Plus? Everything we know about the premium tier
ChatGPT Plus to bring priority access during peak times — at a hefty price
Usually $3,879, this Lenovo laptop is down to $1,479 today
Get this Asus gaming laptop with an RTX 3060 while it’s $400 off
All of Samsung’s videos from today’s Galaxy Unpacked event
Best 2-in-1 laptop deals: Save on Dell, Lenovo, HP and more