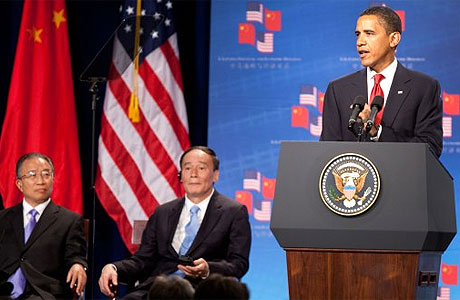 President Barack Obama prodded China about Internet censorship and free speech, but the message was not widely heard in China where his words were blocked online and shown on only one regional television channel.

China has more than 250 million Internet users and employs some of the world’s tightest controls over what they see. The country is often criticized for its so-called “Great Firewall of China” — technology designed to prevent unwanted traffic from entering or leaving a network.

During his town hall meeting in Shanghai on Monday, Obama responded at length to a question about the firewall — remarks that were later played down in the Chinese media and scrubbed from some Chinese Web sites.

“I’m a big supporter of non-censorship,” Obama said. “I recognize that different countries have different traditions. I can tell you that in the United States, the fact that we have free Internet — or unrestricted Internet access — is a source of strength, and I think should be encouraged.”

Obama may have been hoping to set a personal example for China’s leaders when he said he believes that free discussion, including criticism that may be annoying to him, makes him “a better leader because it forces me to hear opinions that I don’t want to hear.”

Only local Shanghai TV carried the event live. It was streamed on two popular Internet portals and on the White House’s Web site, which is not censored, though both the video and audio feeds were choppy and delayed inside China.

The People’s Daily online briefly summarized Obama as telling the crowd that the Internet has “enormous power in assisting information dissemination,” but made no mention of his comments on censorship.

China has the world’s most extensive system of Web monitoring and censorship and has issued numerous regulations in response to the rise of blogging and other trends. But the Web remains far more open than the country’s tightly controlled print and television media, which is the only source of news for the vast majority of Chinese.

Yang Hengjun, 45, a blogger and novelist based in the southern city of Guangzhou, said he was impressed by Obama’s frank admission that some free speech irks him, and by U.S. laws that are intended to keep the government from censoring criticism.

“You see, freedom of speech in America is not given to the people by the president but is something that the people use to supervise their government and president, to protect themselves,” Yang wrote in an essay titled “Why do I Blog? Obama has answered that question.” Posted online late Monday, links to the essay were spread via Twitter.

Because Twitter is blocked in China, Yang and others use proxy servers to get around the controls.