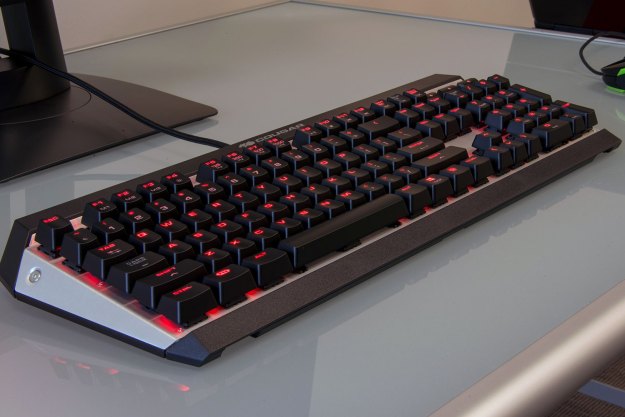 “Aside from its low price, there's very little to like about the Attack X3.”

If there’s one defining trend in modern high-end keyboards, and gaming keyboards in particular, it’s the rise (or perhaps resurgence) of elaborate mechanical switches. Gamers began to see the advantage in the older, mechanical key switch design, and a German company called Cherry began to sell its remarkable mechanical switches to keyboard manufacturers all over the world.

It’s strange, then, that it took fellow German gaming company Cougar a while to adopt the de facto Cherry MX standard – many of its cheaper or older designs use membrane, scissor-switch, or unique “hybrid” mechanical switches. Before the new Attack X3, only the expensive 600K and 700K models used genuine Cherry MX switches.

The Attack X3 is for a more frugal gamer, one who appreciates the coveted switches, but doesn’t need the extra goodies many gaming keyboards cram in. At a recommended retail price of $90, it’s inexpensive for a full-sized (as opposed to tenkeyless) mechanical design — comparable models from Razer, Corsair, Steelseries and the like start at around $110.

But as the old saying goes, you get what you pay for. The Attack X3 demonstrates a notably lower standard for fit and finish, and a few questionable design choices leave it well behind its contemporaries.

The Attack X3 uses the standard ANSI layout preferred by users in the United States, complete with the ten-key, which some price competitive keyboards don’t have. Unlike more elaborate keyboards from Cougar, the only extra keys are dedicated to volume up, volume down, and mute, in the upper right corner. The body is almost all plastic, with a fetching brushed aluminum plate directly beneath the keys. Speaking of keys, buyers have a choice between Cherry MX Blue, Brown, Red, or Black switches – our review unit came with blue.

I was immediately put off by the non-standard layout of the bottom key row.

The keyboard is backlit in a “gamer” red style, and red alone. At this price point you shouldn’t be expecting more elaborate RGB lighting, anyway. Keys are a hard plastic with a soft-touch coating, a unique choice that takes some getting used to, but isn’t unpleasant by any means. Underneath the flared body is a standard set of low-profile feet, but the top feet flip out for a more angled typing experience. It’s all topped off with a non-removable (and extremely thick) 1.8-meter USB cable.

For gamers, the keyboard includes four dedicated polling rates, 125HZ, 250Hz, 500Hz, and 1000Hz. A lower rate supposedly increases responsiveness, but I never found any reason to use the lower settings, since their impact wasn’t noticeable. Gamers can also switch between 6-key rollover and N-key (infinite) rollover with a dedicated function button.

I was immediately put off by the non-standard layout of the Attack X3’s bottom key row. The spacebar is shortened to allow elongated Ctrl, Function, and Alt buttons on the left side, while the right side has the usual key lengths. There’s no Windows key on the left side of the keyboard. It is replaced by a Function toggle key that cannot be changed even in Cougar’s desktop software. If you’re used to controlling essential Windows functions with your left hand – and I suspect most users are — you’ll need to adjust your muscle memory and switch over to the right. The odd dimensions for the spacebar and three left keys also mean you can’t easily swap in a new set of plastic keycaps, despite the near-universal design of Cherry MX switches.

Speaking of Cherry, the key switches perform exactly as you would expect them to. The blue switches on our review board are a “clicky” type, with a loud tactile “click” that helps to keep accidental key presses to a minimum. Cougar’s keycaps, with their stereotypical sci-fi “gamer” font, are the standard height, so you won’t have to adjust to a few millimeters’ difference. They’re also the standard, comfortable beveled shape, and don’t feel oddly misshapen like the keys on some Logitech keyboards.

The red backlighting on the Attack X3 is adjustable with three levels of brightness, or can be turned off entirely. The top function row commands most of the other physical properties of the keyboard, with F1-F3 dedicated to saved custom key profiles, F5-F8 used to switch between poling rates, F9-F12 reserved for media play/pause, stop, back, and forward, and the six-key or N-key rollover modes hanging out below Print Screen and Pause Break.

Gaming felt more or less as I expected once I became used to the keyboard’s odd layout. Gamers used to more elaborate designs with dedicated macro keys will feel somewhat hobbled, but since I prefer to remap to standard keys on a game-by-game basis, I quickly got the hang of the Attack X3.

While this keyboard is affordable, it feels considerably beneath its competitors in terms of fit and finish. In particular, our review unit has a distinct wobble caused by poorly sized keyboard feet. It may seem like a small flaw, but when you habitually type 10,000 words a day, using a wobbly keyboard is like eating lunch on a broken food court table. I had to slide a penny under the bottom left foot to regain stability, a damning statement for a keyboard that proudly declares it German engineering heritage on the retail box.

The backlighting has problems, too. Because the red LEDs are situated on the top half of the keys, only the keycap legends that are also on the top half are fully illuminated. Those keys with top-and-bottom legends, like the entire number row, the tenkey area, all of the function row, and most modifier keys, are only half-lit even at the brightest setting. This design flaw isn’t exclusive to Cougar’s keyboard, but others have solved it with clever keycap designs, or simply squashed both primary and secondary functions to the top of the key. Notably, Cougar’s promotional images for the Attack X3 show all parts of all keys with full, bright red illumination, something that I feel is a bit disingenuous.

Like seemingly all of its competitors, the management software for the Attack X3 screams at the user with bright colors, dark backgrounds, and a confusing layout. While I’ve become used to this complete lack of aesthetic design for “gamer” software (and indeed, a lot of “gamer” hardware), I still appreciate the fact that Cougar’s keyboard features on-board memory. Unlike Razer and Logitech designs, this means that you can set up your preferred profiles and macros, save them to the keyboard, and never have to open the software again.

The inability to move or reprogram the Function key is a huge downside of the software in general, but the rest is more or less as you’d expect. Reassignments and macros are easy enough, and three profiles can be switched on the fly with F1, F2, or F3. There are no extra keys, but that’s part of the design spec here.

While the Attack X3 slides neatly under the price points of its competition, it’s also a much less impressive keyboard than those options even $10 to $20 more expensive, like the Corsair Strafe or the Razer Blackwidow Ultimate. If you’re willing to settle for a tenkeyless model (or if you prefer one), many can be had for the same price or lower. The full-sized Steelseries 6GV2, though only available with Cherry MX Black keys, is a clearly superior option at $100.

Between the wobble experienced in our review unit and the jarring bottom row layout, I can’t recommend the Cougar Attack X3 over any comparable mechanical keyboard, price advantage or no. Cougar needs to go back to the drawing board, hopefully to emerge with more stringent general-use testing and better quality control.

AMD 7000X3D V-Cache CPUs could challenge Intel at CES 2023
The best games to show off Nvidia’s GeForce RTX 4090
Meta Quest 3 is coming, but is Quest 2 still worth buying?
The best Mac games for 2022
Cooler Master’s Orb X gaming pod is futuristic and utterly absurd
Get this Lenovo gaming laptop with an RTX 3050 Ti for $550 today
HP’s popular Spectre x360 2-in-1 laptop is $350 off right now
This massive 17-inch Chromebook is under $200 at Best Buy
Get this 15-inch laptop with a year of Microsoft 365 for $199
This Alienware gaming PC with an RTX 3080 Ti is $530 off right now
MacBook Air (M1) is $199 off, with delivery in time for the holidays
I used ChatGPT to interpret my astrological makeup, and it was surprisingly good
Apple mixed-reality headset: Everything we know about Apple’s VR headset