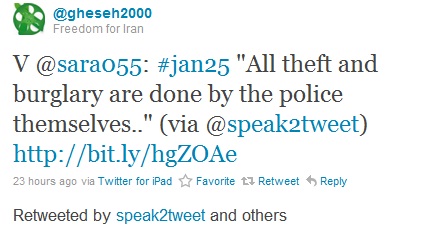 According to the official Google blog, some overtime this weekend from various engineers will now allow Egyptians to Tweet via phone. Recent acquisition SayNow will enable people to use Twitter using a voice connection, and the feature is already live. You can try it out by calling the numbers below:

This will instantly post Tweets along with the #Egypt hashtag. You can find the Tweets (which are already piling up) here, as well as listen to the voice recordings themselves on links within the posts.

“The government is spreading rumors of fear and of burglary and violence, and these are all rumors. We have been out in the streets…nothing is happening…there are incidents of theft and burglary by the police themselves…we are standing together in solidarity.”

Some phone service was restored this weekend, giving citizens access to the Speak2Tweet application. For the time being, this operation is allowing at least some Egyptians communication with the rest of the globe and giving outsiders a small window in as the protests continue to unfold.

How to block third-party trackers in your browser