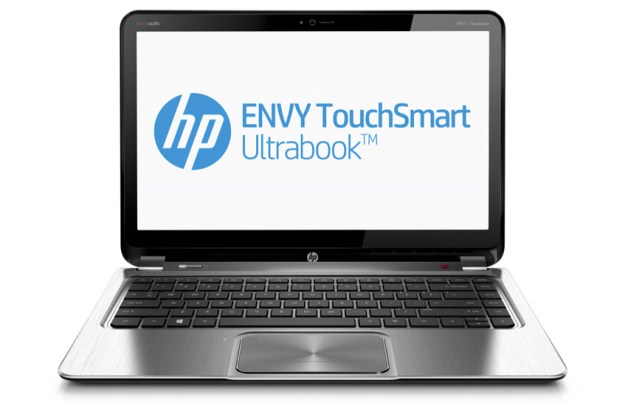 “The addition of a touchscreen drives up the Envy Touchsmart's price, shortens the battery life, and makes the Ultrabook heavier. In the end, the gains don't balance the losses.”

HP’s Envy line has always signified premium quality and beautiful design – usually with high price tags as a result. But as the Envy line moved into Ultrabook territory, prices came down to meet the near-$1,000 goal set forth by Intel. Earlier this year, the company introduced the Envy 4, an Ultrabook with a bold design that started at less than $800.

With the release of Windows 8, we now have the next generation Envy. The HP Envy Touchsmart Ultrabook 4 starts at $799 and, as evidenced by the name, adds a touchscreen display. This update doesn’t represent a major overhaul, so many of the aspects we liked in the last version are still here. That also means that some of the things we didn’t like also stuck around. Can a new operating system and a finger-friendly display raise our estimation of the Envy 4? Read our full review to find out.

Maintaining the slim profile and attractive look, HP kept the same overall design for the touch version of the Envy 4. This time around, however, the company ditched the red and went with a less bold black and silver color scheme. The lid and deck remain aluminum and still look premium, just less striking.

Coming in at 4.5 pounds, the Touchsmart is also a half a pound heavier than the last generation. The extra heft is likely due to the touchscreen panel. At this weight, the Envy feels heavier than it should – even for a laptop with a 14-inch display. Judging by the 0.78-inch thinness, the 13.4 x 9.3-inch footprint, and the Ultrabook sticker on the deck, this machine looks like it should be lighter.

A speaker stretches across the top of the deck with the Beats logo embedded on one side and the power button on the other. This time around, the audio quality isn’t as full and rich as we’ve seen on Beats-enhanced HP laptops. At maximum volume, the speaker is loud enough to hear clearly over medium background noise, but audio through the headphone jack remains superior.

The ports lining the left and right edges may not be numerous, but they also don’t require the need for extra dongles. You get three USB ports (two USB 3.0, one charging USB 2.0), HDMI, Ethernet, memory card slot, headphone, and mic.

The 14-inch BrightView display can boast bright colors, which is a definite boon for Windows 8. Unfortunately, the glossy coating means drawbacks. The foremost is narrow viewing angles. Horizontal angles are wide enough that more than one person can view the screen without issue and you don’t have to sit directly in front of the Envy when watching video. Vertical angles are narrow, and you need to find the sweet spot and stay there in order to not see color distortion.

The Envy’s screen is overly reflective. If you’re viewing a dark scene in a well-lit room, you’re more likely to see yourself than the video. When the keyboard backlight is on, the reflection is pretty distracting when you’re trying to type.

The made-for-fingers new version of Windows encourages the use of touch. For the most part, we found ourselves using the Envy’s touchpad and screen in equal parts. The panel is responsive and even allowed us to select small interface icons without having to be overly precise.

The Envy isn’t so large that reaching out to tap the screen is a pain, but since the hinge isn’t quite tight enough, it often bounced when we used it. Though the screen bounce wasn’t enough to change the angle permanently, it was just enough to make the reflections dance and distract us.

The island-style keyboard on the silver deck is the same one you’ll find on many HP laptops. The keys offer decent – but not strong – tactile feedback. In addition to offering good travel, the keyboard is comfortable to type on.

However, an issue plaguing the last generation has returned with the Touchsmart version. We noticed that the keyboard flexes when in use, which is made even more apparent when the backlighting is on. This, coupled with flex in the lid, doesn’t point to the Envy having very solid construction. That being said, HP did address a previous issue with the lid catching on the deck when opening the laptop.

Another positive carryover from the previous generation is the wide touchpad. Though we often have trouble dealing with clickpads on Windows machines, HP’s are now among the best. The spun metal surface provides just the right amount of friction. It’s responsive without being overly sensitive. Whether you use a touchpad with one hand or two, you won’t encounter jumping cursors, accidental zoom, or other common issues.

Even though the Envy has a touchscreen, Windows 8 gestures are also available on the touchpad. The experience isn’t quite as smooth because the pad itself sits in a shallow well on the deck, so swiping from the edge to bring up the Windows charms take some time to master.

The advent of Windows 8 hasn’t changed HP’s propensity to load up its laptops with bloatware. Norton Internet Security is the most annoying, with popups that are now even more difficult to dismiss than in Windows 7.

There are a few HP-branded apps that are useful for users, including the Utility Center and Connected Backup, but, other than those, bloatware consists mostly of games, shopping portals, and Snapfish.

The Envy Touchsmart gets less battery life than the non-touch Envy 4 with the same 4-cell battery. This is, again, most likely due to the touchscreen panel. While understandable, longevity is a hallmark of Ultrabooks, and this Envy doesn’t quite deliver.

In hands-on testing, the laptop lasted around 5 hours with brightness turned up to 60 percent (to cut down on reflections). On the Battery Eater test the Envy lasted 1 hour and 53 minutes.

HP didn’t change many of the specs in this version beyond adding the touchscreen, so performance is on par with the previous generation. Our review unit included the following configuration: Core i5-3317U low-voltage processor, 4GB of RAM, and 500GB hard drive plus 32GB cache SSD ($908 as configured) – the same as the Envy 4 we reviewed this summer.

The low-voltage processor offers reasonable speed for most mainstream tasks. It’s only when you get into more heavy-duty apps, such as photo editing or massive mail merges, that most users will notice a difference. However, if you’re a heavy multitasker, you should consider adding more RAM if you configure this laptop on HP’s website. With only nine apps running, we used 65 percent to 80 percent of the RAM.

Benchmark scores are nearly identical to the last Envy 4. The Ultrabook scored 4,147 in PCMark07 thanks to the 32GB cache, which helps to speed performance. This is also the magic behind the Envy’s fast boot and wake times. Thanks to the processor, it saw combined score of 35 GOPS in SiSoft Sandra’s Processor Arithmetic benchmark and a combined score of 7,332 MIPS in 7-Zip.

As with most other Ultrabooks, the only graphics option available is Intel’s integrated HD 4000. This makes the Envy good enough for streaming online videos without worry of hitching or dropped frames. It’s also decent for casual gaming, but nothing much beyond that.

During most of our hands-on time, the Envy 4 stayed cool during medium use and while idle. The fan didn’t kick on very often, and fan noise was minimal.

While playing video or doing other demanding tasks, the Envy got noticeably hot on the underside, particularly near the vents in the back. This is inline with what we experienced with the previous generation. Temperatures were high enough that we couldn’t keep the Envy in our laps until it cooled.

The addition of the touchscreen drives up the Envy’s price, drops the battery life, and makes the Ultrabook heavier than before. None of these trade-offs seem worth it. Touch does make the Windows 8 experience a little more enjoyable on laptops that convert to tablets (like the Dell XPS 12, Lenovo Yoga, or even HP’s own Envy x2, but the gains don’t balance the losses here.

For those who like the design and other positive aspects of the Envy Touchsmart Ultrabook 4, the Envy 4 has all the benefits without the burden of a touchscreen. Plus, it’s less expensive. If you are looking for an Ultrabook with a touchscreen, the Yoga 13 or the XPS 12 offer more versatile form factors while maintaining their laptopness.

In the end, HP’s Envy Touchsmart is a decent ultraportable that’s just a little too expensive and a little too heavy.