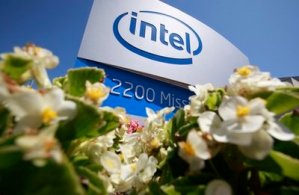 Next Monday, the Intel Core I7 launches, and I’ve been using a system that Intel sent out which not only has the Core I7 and X58 chipset, but two 4870 X2 ATI graphics cards and two of the company’s new high-speed flash drives.

To say that this system, (which has 4 real cores, and 4 virtual cores through hyperthreading, for a total of 8) is fast would be vastly understating the experience. The word amazing comes to mind, and I can hardly wait to put Windows 7 on it (is there such a thing as blindingly fast, squared?) Beyond the processor, or the graphics cards, the system also has around 130GB of second-generation SATA SSD drives.

Boot time is not only a fraction of what it typically is with Vista, applications explode on the screen even before they have been cached. It is hard to describe this experience, but booting into Vista illustrates it pretty well. You know how you typically have to wait for all the stuff to load on Vista once you log into the system? With this system, you wait about three seconds. Where I used to have time to grab coffee with my last fast system, I don’t even have time to yawn now.

Unfortunately, I’m writing this from the Phoenix Strategy 2009 conference and I can’t, yet, use my Core I7 when I travel. Here at the conference, the focus is on the other end of the spectrum: netbook computers. But there’s a subtext of creating a new ecosystem where these little computers would increasingly work as the mobile side of this new class, over ever more powerful desktop machines. That means there is growing potential to have my cake and eat it too.

Let’s chat about what is coming and I’ll close with some of the interesting things that were discussed at the conference, like Microsoft’s decision not to support what could have been the biggest seller this year, and what some may think of as Apple’s false advertising.

Netbooks reverse the price problem that existed with ultraportables that preceded the Apple Air into the market. Small notebooks used to cost a significantly more than normal laptops, and you still paid a significant performance penalty. People generally couldn’t see why they paid more for less, and the class languished, except with women, who generally loved them. But netbooks, while still at a performance disadvantage, are less expensive than their full-sized counterparts, and as a result, sales have been incredibly brisk for the new class of products.

But performance on a netbook still isn’t where most folks want to be, and this creates an opportunity for paired solutions. The premise is being able to remotely link to your desktop, accessing the amazing performance from future Core-I7-like systems with a tiny, broadband-connected device. We are clearly not just talking netbooks, but iPhone-like devices that would be able to use this same capability. In industry terminology, “sync” is the buzzword for it.

One of the most interesting ideas birthed at the Phoenix event was the idea of a PC Application Store, much like what exists for the iPhone and the Google Android platform. I found it fascinating that the concept isn’t being driven by Microsoft, or Apple, but by Phoenix, which is initially populating the store with utilities that make Windows more competitive with the Mac. The company does this by focusing initially on applications that grant Windows PCs capabilities, in some cases by using Linux, that Macs currently don’t enjoy broadly, like sync (BeinSync), LoJack-like security (FailSafe), full remote control service and comprehensive driver updates (eSupport.com), and instant-on extreme battery life capability (HyperSpace). The story isn’t the applications, but the idea of an application store, which would have vetted applications costing a few dollars each, eventually providing a broad range products from productivity to gaming. It would all be wrapped in a services envelope that assures the user they can get help if they run into problems, while proactively correcting problems remotely even before the user is aware of them.

Now I know Google is planning on doing this when they take their Android effort to the desktop, but it is amazing that we haven’t been talking about this before, given the examples Apple and Google have set with their phone platforms. Coupled with a backup service, which is part of the BeinSync initial offering, it promises an experience that could vastly exceed what Apple does in a number of ways, and, if applied to Linux, finally make that platform a contender for the desktop.

For instance, if you bought a new PC, the new machine would arrive with all of your stuff on it, including applications and, with a quick sync, could even match the exact state that your old laptop was in when you last turned it off. Migrations would be measured in minutes, and catastrophic hard drive failures, thefts, and new PC purchases would all be infinitely less painful.

But the big benefit would be that someone other than you would own keeping the PC running well, which is much more similar to the way it is with appliances, consumer electronics, and automobiles. These stores could eventually be provided by the folks who sold you your PC, or the folks who built it, but I’m surprised how long it has taken to create and drive this idea to market. It took someone doing it with phones to get the market moving, and not even Apple, which had the first application store and actually has strong retail and direct sales efforts, has figured it out for the PC yet.

I think this will take about two years to flesh out, but I’m fascinated that, of all the players, Phoenix Technologies is leading the charge.

Wrapping Up: Changes at Warp Speed

While this new I7 is incredible, and netbooks are increasingly capable, the future being created now goes well beyond this hardware. It not only includes the growing synergy between devices but the increasing wealth of online services, and the growth of application stores for the platform. Current economic conditions are forcing change, and that means shifts that might have taken years will likely happen in months now, as vendors and technology suppliers aggressively innovate in order to survive.

There were a couple things at the show that I thought were worthy of mention. Microsoft supposedly OK’ed 12-inch screens for netbooks, but not the MacBook Air‘s 13.3-inch size. This likely prevented a product that might have owned the fourth quarter from entering the market, while potentially creating a huge opportunity for Linux. Can you imagine how hot a $500 MacBook-Air-like product would have been this quarter?

Speaking of the MacBook Air, according to one of the engineers here, while the new version does have 1.6 GHz processor, it can’t handle the heat this part puts out, so the processor steps down to 800MHz under load to keep the system from cooking. So new Air buyers, allegedly, are getting about half the performance they think they purchased. If true, it may be time for Apple to stop focusing on Microsoft’s problems and fix at least one of their own.