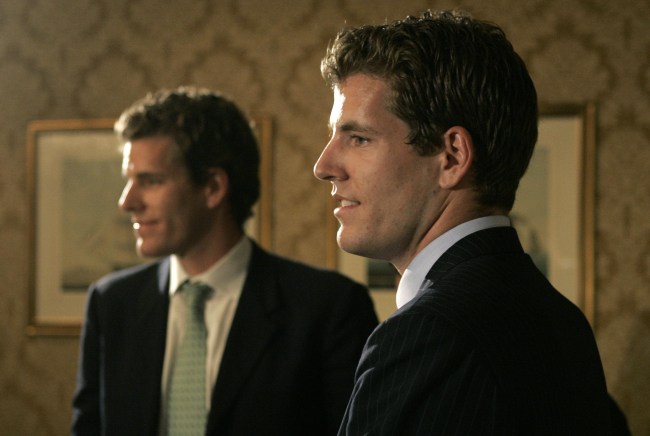 The possible real life sequel to The Social Network hit an unfortunate snag today, as Reuters is reporting that a federal court has ruled against continuing the legal drama between Facebook and its founder Mark Zuckerberg, and Tyler and Cameron Winklevoss, who had petitioned the courts to throw out the original 2008 legal settlement in their favor so they could bring suit again.

For those that missed the movie (and the real life drama), the Winklevoss twins have claimed that they, along with their partner Divya Narendra, are the true genesis of Facebook. In 2003 while at Harvard, the brothers Winklevoss and Narendra hired a plucky young programmer named Mark Zuckerberg to help them do some coding on a social network that they were working on called Harvard Connect. The idea was that Harvard students would be able to connect with one another in the same way that you could with Friendster or MySpace, but the trick was exclusivity.

From this kernel, Zuckerberg had the idea for Facebook, while the Winklevoss boys and Narendra had an idea to sue.

The legal proceedings began in 2007 and are somewhat well documented (except for certain parts that remain sealed), and formed much of what audiences saw in David Fincher’s film, The Social Network. The twins claimed that Zuckerberg copied their idea and used their source code, while Zuckerberg claims that he had a better idea using his own coding, that made it impossible to complete work on Harvard Connect.

As Facebook grew, so too did the anger of the Winklevoss twins, as did their opinion that Zuckerberg had been lying to them all along. Narendra has remained a constant ally to the twins, and continues to be part of all lawsuits, but he is far less vocal that the twins.

Every piece of correspondence between the two sides involved with Harvard Connect was combed through, and by 2008, Facebook offered a settlement of $20 million in cash, and 1.25 million worth of shares in Facebook (although Facebook won’t go public until 2012). When all is said and done, the settlement will net the plaintiffs close to $120 at Facebook’s current estimated stock value.

The problem is, according to the brothers, Facebook deliberately gave them a misleading evaluation of its stock before the settlement.

According to the request to throw out the settlement filed earlier this year, the Winklevoss twins requested that the majority of the initially agreed upon $65 million settlement offer would be paid in stock based on a price of $39.50. The $39.50 price, which all parties agreed to, came from an evaluation taken from an attempt by Microsoft to purchase Facebook five months prior to that. The reason the Winklevoss twins believe that they have grounds to throw the settlement out, is that a report later came to light which claimed that an independent evaluation of Facebook, completed days before the settlement, valued the Facebook price at $8.88 per share–which was the common stock price, while the Microsoft price was for preferred stock.

As it stood, the Winklevoss twins, Narendra and all lawyers present agreed that the cash from the settlement would purchase the stock at $39.50 per share. If the common stock price had been used instead, the twins and Narendra would have been awarded four times as much stock, which today would be worth more than $450 million.

The Winklevoss twins claim that Facebook did not make the distinction between the preferred stock price and the common stock price clear, while Facebook claims that it was under no obligation to do so.

So once more unto the legal breach they went, as the twins (with Narendra agreeing but otherwise remaining out of it) requested that a federal court throw out the original settlement so they could restart the legal proceedings. Today that request has been denied, which should—in theory—have ended the matter once and for all. Of course, it seemed like the matter was settled back in 2008, and yet here we are.

So now, the Winklevoss twins—who are also Olympic athletes and come from a wealthy and influential family—may have to pick up the pieces of their lives and soldier on with the meager $120 million they received for having an idea eight years ago that may or may not have inspired another idea.

Actually, scratch that, the saga continues! While writing this article, which focuses on the denial of the Winklevoss’ request, the twins took to Twitter and have claimed that they will continue the legal battle and file a “Petition for Refiling” within the next 15 years. It appears that the chances for a Social Network sequel are still alive.