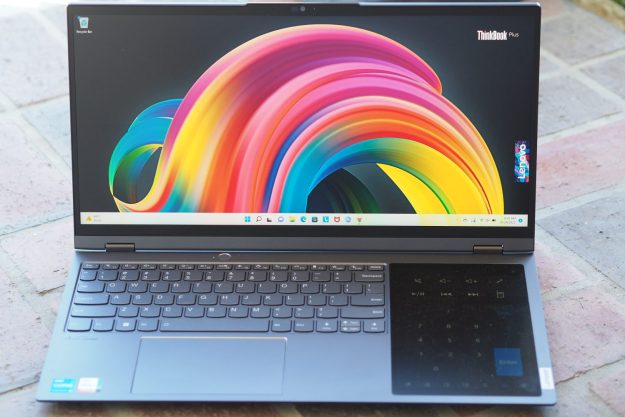 “The Lenovo ThinkBook Plus Gen 3 has a genuinely useful widescreen display and second panel, but its creative performance suffers from integrated graphics.”

Specifically, it incorporates an 8-inch IPS display on the palm rest, to the right of a keyboard and touchpad that would fit nicely on the Gen 2 machine. The primary display, meanwhile, is an extremely wide 17.3-inch display running at 3072 x 1440 resolution and 120 hertz. It’s a fascinating design that works well for multitasking, even if it falls short of being the creativity workstation that it looks like at first glance.

The first thing I noticed when I started using the ThinkBook Plus Gen 3 was that the keyboard and touchpad were as comfortable as with any other laptop. That’s unlike some dual-screen laptops where the keyboard is cramped or at a bad angle and the touchpad is set off to the right.

The Asus ZenBook Pro Duo 15 is a prime example, and I found that laptop’s layout awkward and uncomfortable. With the ThinkBook, it seemed more like Lenovo started with a standard 13-inch laptop and stretched it to the right, increasing the primary display’s width and tacking on the second display.

The result is a laptop that, although strange at first, is more useful than a large laptop that was disfigured to fit everything in.

Speaking of the keyboard, there’s plenty of key spacing and normally sized keycaps, and the switches are light and snappy with a bottoming action that’s just a bit loose. It’s not the best Windows keyboard I’ve used, like those on Dell’s XPS and HP’s Spectre machines, but it’s still very good. The touchpad is large and has a comfortable surface, with button clicks that are slightly sharp.

Overall, it’s a weird design, but it works. The biggest problem users will run into is finding sufficient horizontal space, which is fine on a typical desktop but certainly won’t work on an airline or any other confined space. However, the display’s width makes the ThinkBook Plus Gen 3 an excellent multitasking laptop, allowing two or three useful windows to be stacked side by side. All the things that make widescreen monitors so nice to work with apply here.

The standout feature, though, is the secondary 8-inch IPS display that takes up the right fifth of the palm rest. It’s touch-enabled, unlike the primary display, and it supports a sliver of an active pen that docks and charges in a slot behind the chassis.

The display has several modes, the simplest of which is acting as a second “external” monitor that apps can be dragged to for even more multitasking prowess. There’s also a rather massive numeric keypad that’s great for any who enters a lot of data. Pair it with a Motorola smartphone and the screen can mimic the phone’s display.

If you keep a paper notebook next to you for jotting down notes, the display can take over that function with the ability to upload to the Microsoft OneNote application. Finally, Adobe Photoshop, Premiere, and After Effects can display control panels on the display, making for a more convenient way to manage their complex interfaces.

The bottom line is that although you pay a price in chassis width, it’s worth it if your workspace is accommodating. Heavy multitaskers should take note, and some comfort, in the fact that the ThinkBook Plus Gen 3 is also surprisingly thin at 0.71 inches and light at 4.41 pounds. That’s thinner than the slimmer Dell XPS 15 and about as heavy.

If the ThinkBook Plus Gen 3 is going to work for creators, then that widescreen display needs to offer wide and accurate colors and excellent contrast. Out of the box, it looks great, with just enough sharpness, plenty of brightness, dynamic colors, and true blacks (for an IPS panel).

According to my colorimeter, the primary display was definitely bright, and it produced excellent contrast. Its colors were just a touch low for creative pros, who like to see the Adobe RGB gamut run well into the 90% range, while accuracy wasn’t great at 2.2 (1.0 or less is excellent for creative work). The secondary display wasn’t nearly as colorful, but it was bright at 400 nits and enjoyed 1260:1 contrast. It works well for its purpose.

Creators could get by with this display, but it wouldn’t be the best experience. Productivity workers, though, will love it.

The media experience is rounded out by poor audio. The dual downward-firing speakers didn’t get very loud, and there was considerable distortion. Bass was nonexistent and highs were overly accented, drowning out the mids. It’s a shame, too, because there’s a little more stereo separation merely by virtue of the speakers being placed more widely apart. You’ll want headphones or external speakers for sure.

It should be faster

As we’ve seen, the ThinkBook Plus Gen 3’s design is well-made for creators, although its display isn’t quite suitable for professionals. Unfortunately, it’s also underpowered for a creative workstation. Applications like Adobe’s Creative Suite utilize a discrete GPU to speed up various processes, which has a tremendous influence on a laptop’s overall performance.

We test this using the Pugetbench Premiere Pro benchmark that runs in a live version of Adobe’s Premiere video editing application. Generally speaking, the fastest laptops in this benchmark are those with the most powerful GPUs. The exception is Apple’s MacBook Pro with M1 Pro and Max CPUs, which have specific optimizations built into their GPU cores that make them extremely fast at churning through creative tasks.

Unfortunately, the ThinkBook Plus Gen 3 is limited to Intel’s integrated Iris Xe graphics. This is fine for productivity work, but the GPU performs poorly in Pugetbench and so isn’t the best choice for creators. And that’s a shame because Lenovo used 45-watt Intel 12th-gen CPUs that would have mated nicely with even an entry-level GPU like the Nvidia GeForce RTX 3050 Ti. The HP Envy 16 is a less expensive laptop that packs in an RTX 3060 GPU and so is much faster in GPU-intensive applications. It scored 932 in Pugetbench compared to the ThinkBook’s 353.

The ThinkBook Plus Gen 3 provided solid productivity performance with the 12-core, 16-thread Core i5-12500H, including strong scores in our CPU-intensive benchmarks like our Handbrake test that encodes a 420MB video as H.265. But its suitability for GPU-intensive apps is limited, and of course, gaming is out of the question.

We’ve covered the most important aspects of the ThinkBook Plus Gen 3. There are a few other things to cover before wrapping up.

First, battery life is disappointing but not unexpected given the relatively small 69-watt-hour battery and the large 17.3-inch display. The ThinkBook Plus Gen 3 managed just 4.5 hours in our web browsing test, seven hours in our local video looping test, and 5.75 hours in the PCMark 10 Applications battery test which gives an idea of productivity battery life. Those scores are well under average and don’t keep up with several other large-format laptops. Simply put, the ThinkBook is fine as a laptop you’ll use in one location, but it’s not one you’ll want to take on the road without its power supply.

Next, the webcam is 1080p, which makes the ThinkBook a great laptop for videoconferencing. There’s also an infrared camera for Windows 11 Hello passwordless login support, along with a fingerprint reader embedded in the power button. The ThinkShutter privacy screen slides over to block the webcam.

Finally, connectivity is solid, with a mix of modern and legacy connections, although more than one Thunderbolt 4 port would be appreciated. Some of the ports are distributed along the rear of the chassis, which is unusual but handy.

Intense multitaskers will be happy, creators not as much

Experimental designs like this one aren’t always more useful. Sometimes, the designs bring more compromises than benefits. That’s not the case with the ThinkBook Plus Gen 3, which is well-designed for a specific user: the intense multitasker. If you’re prone to running multiple apps at once and need to keep several windows in the forefront, then the wide display and secondary panel are perfectly suited.

The use case that I wish worked well with the ThinkBook is the creator, given how the second display can enhance workflows with Adobe applications. Unfortunately, the laptop’s GPU and display colors aren’t up to snuff. It’s not that you can’t use the ThinkBook Plus Gen 3 for creative work; it’s just that you won’t be completely happy with the experience.

Should you buy the ThinkBook Plus Gen 3? Yes, if you multitask like a demon and have space for a very wide laptop. Otherwise, you can get a large format laptop, like the HP Envy 16, that’s faster and has a better display for less money.