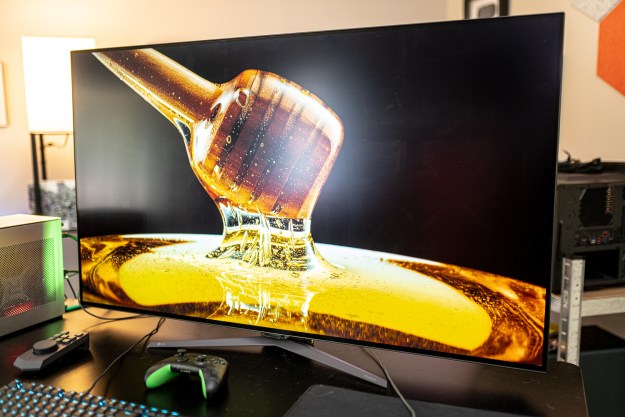 The introduction of large, OLED gaming monitors begs an interesting question: What makes a gaming monitor, a monitor? Compared to the multitude of similar-sized OLED TVs out there, it’s not always easy to tell.

LG’s UltraGear 48-inch OLED gaming monitor (48GQ900-B) made me face that existential question with new appreciation. This one does have a few features to set it apart from an OLED TV, such as a series of highly capable and PC-ready ports, but don’t try to fool yourself: This gaming monitor feels a lot like a TV, for better or worse.

What makes a monitor

It also comes with a wireless desktop remote, not unlike the controller for the Samsung Odyssey Ark. It feels hollow and a bit cheap considering this is a $1,500 monitor and the remote doesn’t hold a candle to LG’s Magic Remote included with TVs like the C2. Still, it makes sense for a proper monitor and makes navigating the menu a breeze.

You have access to a few dedicated buttons for picture modes, along with the expected assortment of input, power, and menu buttons. Everything is centered around a large dial in the middle, which you can twist to the right or left to adjust controls and navigate the menus. It’s super intuitive and much more useful than a normal remote for a desktop setup.

My only gripe is that you aren’t able to store custom color profiles in the menu, which would be useful for quickly adjusting features like the black stabilizer and LG’s Dynamic Action Sync (DAS).

You have several built-in profiles, though, including four game profiles you access through a dedicated button on the controller. These profiles make a big difference, and I found myself toggling between them a lot more often than I did on a display like the Sony InZone M9. In Destiny 2, for example, the standard Gamer 1 profile was a bit too dark, but it provided a nice boost in color in Forza Horizon 4.

LG’s exclusive DAS feature is a welcome addition, even if it doesn’t make a ton of sense on a screen like this. DAS essentially allows the monitor to bypass buffering through your cable, shooting data over the cable as the panel refreshes for a real-time sync. It’s a feature of esports monitors, but going for a higher refresh rate like the one offered on the Asus ROG Swift PG32UQX will provide more up-to-date information for the most competitive players.

All gamers can appreciate the inclusion of FreeSync and G-Sync, though. The display is certified for FreeSync Premium and it’s compatible with G-Sync, though it doesn’t have Nvidia’s dedicated G-Sync module inside. Regardless, you’re getting variable refresh rate, which now works over the HDMI 2.1 ports for consoles like the Xbox Series X as well as PCs.

Strapping the colorimeter on the screen, it’s clear why OLED is such a destination for gaming and other forms of media. LG advertises a typical brightness of 135 nits, but I measured closer to 180 nits. That sounds low, but it’s not the brightness that matters with OLED. It’s about the contrast. The UltraGear 48-inch OLED has a contrast ratio of somewhere above 1,000,000:1. My SpyderX only measured around 600,000:1, but it really doesn’t matter.

A normal LED monitor is going to have a contrast ratio of around 3,000:1 at most, which displays like the Sony InZone M9 have to compensate for with a local dimming feature. OLEDs are like having dimming zones on every pixel. Each pixel can control its brightness (including going completely off), offering the best contrast you can get from currently available display tech.

Brightness takes a hit, though, which is why the UltraGear 48-inch OLED is so dim. Glare is a big issue as it usually is with OLED panels, so a brighter monitor like the Alienware 34 QD-OLED is better if you’re in a bright room. The matte anti-glare coating helps with reflections a bit, much more than the glossy finish seen on LG’s OLED TVs, but brightness is the main issue here.

Still, you’re getting spectacular HDR performance. The UltraGear 48-inch OLED is an HDR monster on the level of the top OLED TVs. It’s transformative for moody games like Destiny 2, and it makes the best HDR games like Cyberpunk 2077 pop off the screen.

It’s great for movies, too, but that’s where the monitor/TV duality turns into a negative for the UltraGear 48-inch OLED. It only supports HDR10, while LG’s OLED TVs support Dolby Vision and dynamic tone mapping, as well. HDR10 is all that’s available for PCs, but the lack of Dolby Vision means you can’t take advantage of dynamic metadata on a console like the PlayStation 5 or a streaming box like the Nvidia Shield.

Despite that quibble, you’re still getting the best of the best in terms of HDR: inky blacks, vibrant highlights, and color that puts any other panel technology to shame. LG advertises 99% coverage of DCI-P3 (I measured 98%, for the record), which gives you a ton of extra room in content that can go beyond sRGB. LG includes a dedicated sRGB mode if you want to limit the color range, which is a great point to reference if you’re doing any creative work on this screen.

Outside of the DisplayPort connection and the unique remote, LG pushed this monitor a little further than it would its TVs. The display has a max refresh rate of 120Hz, but PC gamers using the DisplayPort connection can overclock the monitor to 138Hz. And this overclock doesn’t produce the nasty smearing artifacts you find on VA panels. OLED pixels have a response time somewhere near 0.1ms, so nothing hangs around too long, even at higher refresh rates.

For gaming, the obvious question is size. Does 48 inches make sense for you? Although the massive size was incredible in Marvel’s Spider-Man and cinematic adventures like Elden Ring, it’s a bit tough to manage in keyboard and mouse-focused games like Destiny 2 and Cyberpunk 2077. You need to push the screen to the back of your desk and lean back a little to get the right view, which is much more comfortable to do with a controller than it is with a keyboard and mouse.

At native resolution, it’s much easier to spot aliasing on the screen as the pixel density goes through the floor.

The size has big implications for image quality, too. The screen looks great, but you need one of the best 4K graphic cards to drive this screen. Even with an RX 6700 XT, I couldn’t crack a smooth 60 fps in Destiny 2 or Cyberpunk 2077 at native resolution.

There are tools like AMD’s FidelityFX Super Resolution (FSR) and Nvidia’s Deep Learning Super Sampling (DLSS) to help with performance, but the size of the UltraGear 48-inch OLED limits their effectiveness. Even at native resolution, it’s much easier to spot aliasing on the screen as the pixel density goes through the floor compared to something like a 27-inch 4K monitor.

It makes sense. At TV-esque sizes, you’re supposed to view 4K a few feet away from a display. Using this monitor as a proper monitor exposes why that’s the case. Text isn’t as clear, Windows scaling needs some adjustments, and high resolutions don’t feel quite as sharp as they should. There are downsides to a larger display as a monitor, and pixel density is chief among them.

As you might suspect, you can’t adjust the monitor, either. You can’t adjust most TVs, granted, but the stand is smaller and connects to a small sliver on the back of the monitor. It doesn’t feel flimsy, but it doesn’t feel like a proper monitor stand, either. If you can, I’d mount the UltraGear 48-inch OLED on a wall with the VESA mounting holes.

A lot of room to play

The screen is massive and unmanageable for a lot of people, but it does wonders for productivity. You’re essentially getting a grid of four 24-inch monitors, and with Windows Snap Layouts, you can drag windows around to occupy all corners of the screen. The UltraGear 48-inch OLED may look unpractical for day-to-day use, but it’s a lot more practical than something like the Samsung Odyssey Ark (and a lot cheaper, to boot).

The size affords some seriously powerful mood lighting, too. You have two big LED bars around the back of the monitor that offer a soft underglow. Unlike a lot of these bias lighting features, the UltraGear 48-inch OLED’s bars get bright enough that you don’t need to buy a $15 RGB strip to stick behind the monitor. You don’t have a ton of color options, but you can still set up four static color presets in the menu, as well as choose a cycling effect.

Thankfully, you don’t need to dedicate an extra desk space to speakers with the UltraGear 48-inch OLED. The built-in speakers are fantastic, with deep resonant bass, a ton of volume, and clarity in the mids and highs. They’re not on the level of the best PC speakers, but I played through some Destiny 2 and Tales of Arise on the built-in speakers, and I don’t have any complaints.

Most PC gamers use a gaming headset, and the UltraGear 48-inch OLED has you covered there, too. There’s a headphone jack on the front of the monitor, which even supports DTS Headphone: X. I watched a few movie trailers and played Cyberpunk 2077 with the HyperX Cloud Stinger 2 headset wired up, and I could see myself settling in just fine.

Should you buy the LG UltraGear 48-inch OLED?

A small touch like the headphone jack up front is what makes the UltraGear 48-inch OLED a proper monitor, not a TV. Individually, none of the features justify buying this monitor over a newer, better TV in the same size for the same price. Collectively, they make using the display as a monitor much more practical.

That functionality is only bolstered by the excellent image quality afforded by OLED. There isn’t another monitor with a traditional LED backlight that can hold a candle to what LG is offering here, at least in terms of image quality. It’s no secret that monitors are well behind TVs in technology, but the UltraGear 48-inch OLED balances the scales — even if 48 inches is far too big for most folks to feel comfortable with.