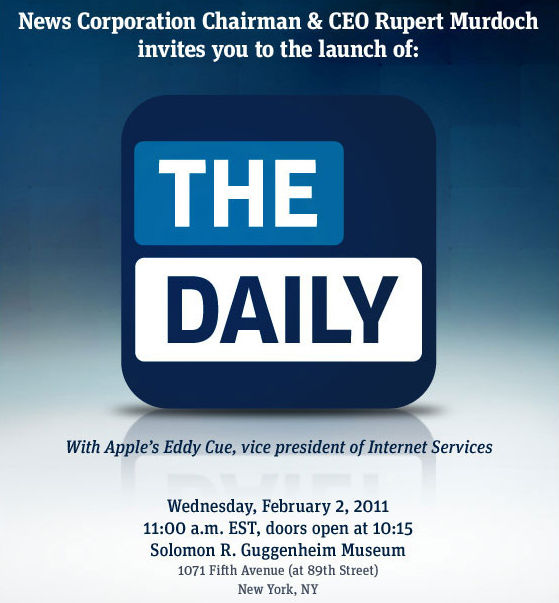 At the DLD Conference in Munich two days ago, News Corp. exec James Murdoch announced he hoped The Daily’s release would fall “in the next few weeks.” Turns out that was a conservative estimate, and the long-awaited exclusive iPad publication will launch February 2.

An invite from News Corp from chairman and CEO Rupert Murdoch was sent to members of the press today revealing the date. It also looks like Apple’s VP of Internet services, Eddy Cue, will be there to represent his company, and will most likely introduce Apple’s subscription service.

Originally, it was widely reported that The Daily would be unveiled on January 19. The date (and at that point, the publication) was never confirmed by News Corp. or Apple, and it quickly came and went. There was speculation Steve Jobs’ leave of absence caused the continuously pushed back date, and the AP reported Apple’s CEO was originally slated to present on February 2, but for medical reasons will not attend.

We’re uncertain how successful The Daily will be with iPad users. News Corp. has poured a considerable amount of money, time, and personnel into the project, but to us it seems like Apple debuting a subscription service for other publications is what’s most significant about February 2.

iCloud might be sending your photos to strangers’ computers
Windows 11 vs. Windows 10: Finally time to upgrade?
The best desktop computers for 2022: Dell, HP, Apple, and more
HP Envy x360 13 vs. Apple MacBook Air M2
This 15-inch Dell laptop is just $250 today, but it’s selling fast
All the products that Apple didn’t announce in 2022
Nvidia may be shooting itself in the foot with its new monster GPU
This killer Black Friday deal on an RTX 3060 gaming laptop is still available
The best Intel processors for 2022
The most innovative laptops of 2022
How to create a calendar in Google Sheets
Discord now lets creators make money, and it’s not with crypto
Acer Swift Edge vs. Microsoft Surface Laptop 5