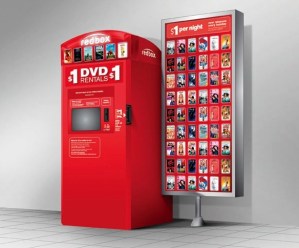 Coinstar’s kiosk movie rental service Redbox is officially planning on launching an online streaming service that will compete with Netflix and Hulu. A Redbox online movie streaming service has been rumored to be in the works for sometime, but the company’s president Mitch Lowe confirmed the project on Wednesday following a meeting with analysts.

The streaming service will likely be based on a monthly subscription plan that will permit users to both stream content online as well as use Redbox’s existing kiosk locations to exchange physical DVDs.

It’s all but certain that Redbox will rely on a partnership with an existing company with the infrastructure to handle the demands of video streaming.

Amazon has been reportedly working on developing its own video streaming program, making the company an attractive partner for Redbox. Walmart may also be up for consideration. The retail giant purchased the streaming site Vudu last year, meaning it already has the hardware and technical know-how on hand to deploy a subscription-based content streaming service.

Redbox, once a strong force in the movie rental market, has entered a period of relative decline recently, likely due to a growing consumer preference for online streaming rather than physical rentals. That being the case, we’re likely to see Redbox debut its online streaming program soon — likely sometime in 2011. How that service will stack up against the likes of Netflix and who Redbox’s partner will be, are questions that remain unanswered.

Topics
The best game-streaming services for 2023
Microsoft Word vs. Google Docs
How to watch Super Bowl 2023 on your computer
The 6 biggest problems with ChatGPT right now
Apple Reality Pro: everything we know about Apple’s VR headset
What MacBooks needs to learn from competitors about transparency
Best Apple Deals: Save on AirPods, iPads, MacBooks and more
You’ll be surprised how cheap this 27-inch QHD monitor is today
We now know how Apple’s VR headset may handle video, and it’s pretty awesome
Best HP laptop deals: HP Envy, HP Spectre x360, and more
The first RTX 4080 laptops are much cheaper than we expected
Intel targets RTX 3060 takedown with Arc Alchemist price cut
Perfect for school, this 14-inch laptop is discounted to $150 today