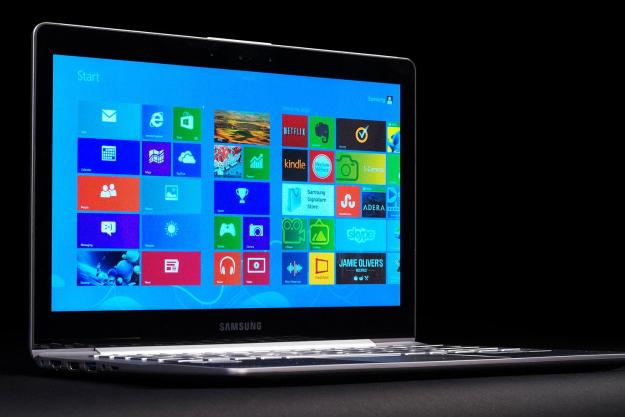 “Due to its outdated look and feel, and unimpressive performance, the Ativ Book 7 isn’t the best Ultrabook for the average user, but its outstanding battery life and beautiful display will appeal to travelers.”

Ah, the Ultrabook. Three years ago, it didn’t exist; but today, every brand makes at least one, and many make three or four separate models at a variety of price points. Competition between manufacturers to control this new category has spurred a significant improvement in quality over the last few years.

There’s nothing in its price range that’s better for frequent fliers.

The Ultrabook push gave the laptop market’s smaller competitors the chance to expand their reach, and few have capitalized on it more than Samsung. Long an also-ran, particularly in the North American market, Samsung redoubled its efforts with a comprehensive line of touch, tablet, and Ultrabook systems. Samsung computers are now sold at every price point, and in every form, from traditional desktops to cutting-edge Windows tablets.

One of the most important products in Samsung’s PC catalog is the Ativ Book 7, a 13-inch Ultrabook that starts at $1,060. Though the ultra-thin Ativ Book 9 often steals the show at conferences, its slightly more affordable cousin offers a brighter screen and has a larger battery. In other words, this is the Ultrabook most people will actually buy.

A look at the specifications reveals a problem, however: Ivy Bridge hardware. Our entry-level review unit arrived with a Core i5-3337U processor, 4GB of RAM, and a 128GB hard drive. While these components will likely lead to good performance, they’ll make it hard for the Book 7’s battery to hold its ground. Can this system compare to competitors who’ve already made the leap to Haswell?

An uneducated user could easily mistake the Ativ Book 7 for, well, almost any other Ultrabook released over the last two years. Prominent chrome Samsung logos aside, the system’s silvery exterior, glossy black display bezels, and thin profile are par for the category. This isn’t to say the system looks bad; it’s just not as interesting as Dell’s XPS 13 or Lenovo’s U310. Color options could help spice up the look, but none are available.

While the chassis is made entirely out of aluminum, and looks the part, its construction feels cheaper than the materials suggest. Some panels, such as the lid, almost feel as if they’re made of plastic instead of metal. We ran into build quality issues, as well. Our review unit wobbled slightly when placed on a flat surface, which is the result of the chassis being permanently bent. This was a common issue with early Ultrabooks, but we’d thought it had been conquered; apparently, we were wrong.

Connectivity comes via three USB ports (one of which is 3.0), as well as HDMI, DisplayPort, Ethernet, a combo headphone/microphone jack, and a card reader. The inclusion of two video outputs is good for a system in this category, but we would have liked to see more than one USB 3.0 port.

While the Ativ Book 7’s chassis is made of aluminum, its keys are silver plastic, which lets down the otherwise premium look. The layout is great, offering large keys and a spacious palmrest, but there’s not enough travel or tactic feel, and the chassis allows for some flex when a key is vigorously pressed. All of this results in a spongy, vague typing experience.

Backlighting is standard and activated via a function hotkey. Three levels of brightness are available and light-leak is minimal even at maximum. Buyers who tend to use their laptop in a dimly lit room may find this feature enough to redeem the so-so keys.

Navigation via the touchpad is barely acceptable. Responsiveness is middling, and while multi-touch gestures work well, we sometimes found them working too well. We frequently tripped over Windows 8’s multi-tasking gestures for some reason, perhaps due to the slightly off-center positioning of the touchpad relative to the spacebar. Better definition between the palmrest and touchpad surface might help, as both have a similar texture and a separated by only a thin strip of chrome that’s barely distinct from the touchpad surface.

High-quality displays have become common among Ultrabooks, and the Ativ Book 7’s is no exception. We found the 1080p display capable of rendering 94 percent of the sRGB gamut.

High-quality displays have become common among Ultrabooks, and the Ativ Book 7’s is no exception.

Our tests resulted in respectable black levels and a high maximum brightness. All of this culminates in a solid contrast ratio of 590:1 with the display at 100 percent brightness.

Only the glossy coating, surrounded by glossy bezels, provides some distraction. The bright backlight can alleviate glare in most situations, but direct sunlight or very bright interior lighting can be an issue. Viewing angles, on the other hand, are excellent on both the horizontal and vertical axis.

Audio is clear, and reasonably loud, but struggles to deliver anything resembling bass. This results in gutless sound that’s better suited for video conferences than movies. Most users will want to pair the Ativ Book 7 with headphones or external speakers.

Intel’s power-sipping 4th-gen processors have caused major problems for that have yet to make the upgrade by putting the 3rd-gen parts to shame in portability tests. We expected the same story from the Ativ Book 7, but it bucked the trend.

We found that this Ultrabook can last almost 10.5 hours during a light load cycle with no Wi-Fi usage. The Peacekeeper Web browsing benchmark consumed a full charge in 6 hours 23 minutes, and even the high-load Battery Eater test needed 3 hours and 27 minutes to completely drain this Samsung. These results are impressive across the board, almost matching battery life champions like the latest MacBook Air 13-inch and the Toshiba Kirabook.

Samsung’s secret? Raw capacity. The Book 7’s battery is rated for 57 watt-hours, which is huge for an Ultrabook. If Samsung updates this system to a 4th-gen Intel Core processor, and doesn’t reduce the size of the battery, endurance will be outrageously good.

Our wattmeter told an interesting story by showing consumption of up to 16 watts at idle with the display at maximum brightness. That’s a lot for an Ultrabook, but the display does become very bright, and that obviously requires more power. Processor load increases power draw to 31 watts, and our graphics stress test further increased power draw to 41 watts. Clearly, the Book 7 is not the most efficient choice, but power draw is still lower than an average laptop.

Our review unit, a base model, arrived with a Core i5-3337U processor. This part seems to be replacing the slightly slower Core i5-3317U as the mid-range 3rd-gen processor of choice, perhaps in hopes of keeping buyers attracted to without 4th-gen Core hardware.

It delivered good results in our benchmarks by scoring 39.4 GOPS in SiSoft Sandra’s Processor Arithmetic test and 7,471 MIPS in our 7-Zip benchmark. These scores are strong, but they’re also exactly what we’d expect to see from the hardware. There’s no surprises here, nor any advantage over the competition.

PCMark 7, a general system test, came to a disappointing score of 3,588. Most competitors with a solid-state drive manage to score over 4,000. While the Book 7 shouldn’t be called slow, its lackluster storage performance holds it back in this benchmark relative to alternatives like the Lenovo Yoga 13 and Acer S7.

Discrete graphics solutions are not available, so Intel HD is the order of the day. Predictably, this leads to poor gaming performance. 3DMark reached a Cloud Gate score of 2,981 and Fire Strike scored 436, both of which are slightly below average for the hardware. Most 3D games will play, but modern titles will only run at low or medium detail, and the most demanding games will be playable only at a resolution lower than the Ativ Book 7’s native 1080p.

Like most other Ultrabooks, the Ativ Book doesn’t make much noise at idle. The fan is but registered no more than 40.7 decibels, which is low enough to be lost in moderate ambient noise. Load is a different story, however. We recorded up to 45.8dB while running the 7-Zip processor benchmark, and up to 48.1dB during our graphics stress test. The Ativ Book 7’s fan becomes very noticeable under load and may annoy users sensitive to fan noise.

While the fan works hard, it didn’t seem to improve temperatures, which reach as high as 109 degrees Fahrenheit at load. This is a common reading for an Ultrabook, but it’s high enough to make lap use uncomfortable. At idle, the system cools to a more manageable 90.1 degrees, which is average for the category.

At first glance, Samsung’s Ativ Book 7 seems like an Ultrabook that should have been released two years ago. The system is sleek, but materials and build quality don’t back up the premium appearance or $1,060 price tag. A current-generation MacBook Air, Lenovo Yoga 13, or even Acer S7 can put the Book 7’s look and feel to shame, and the first two alternatives can be had at a slightly lower price.

The battery provides a chance of redemption. Despite its reliance on a 3rd-gen processor, this Samsung matches or exceeds the endurance of an average 4th-gen Ultrabook, and only a few far more expensive systems have performed better in our tests. Yet the great battery life doesn’t result in excessive bulk; the Book 7 still weighs in at about 3.5 pounds and is only three-quarters of an inch thick.

While excellent endurance alone isn’t enough to earn our recommendation, it is enough to off-set some of this Ultrabook’s flaws and keep it in contention for certain buyers. We think most buyers would be better with an Asus Zenbook, Lenovo Yoga, or Dell XPS 13, but those who need outstanding portability should add the Samsung Ativ Book 7 to their list of contenders. There’s nothing in its price range that’s better for frequent fliers.

Topics
Apple just found a bizarre way to make virtual keyboards less annoying
Best 2-in-1 laptop deals: Save on Dell, Lenovo, HP and more
All of Samsung’s videos from today’s Galaxy Unpacked event
The Galaxy Book 3 Ultra is Samsung’s most powerful laptop ever
Nvidia may have another monster GPU in the works, and the price could be outrageous
AMD’s Ryzen 9 7950X3D pricing keeps the pressure on Intel
What is ChatGPT Plus? Everything we know about the premium tier
ChatGPT Plus to bring priority access during peak times — at a hefty price
Usually $3,879, this Lenovo laptop is down to $1,479 today
Get this Asus gaming laptop with an RTX 3060 while it’s $400 off
The best USB-C cables for 2023
Forget the MacBook Pro 16: Dell XPS 15 is $400 off right now
This popular HP laptop just got a big price cut — now $270