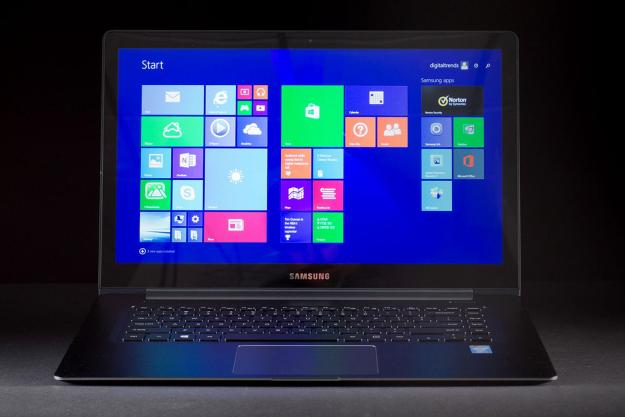 “Brilliantly engineered, the ATIV Book 9 is hampered by a CPU that can be found in systems that sell for a third of Samsung’s $1,499 MSRP.”

Samsung’s ATIV Book 9 was among the PC industry’s first responses to the Apple MacBook Air. Light, thin and thoroughly professional, the system emulated the Air well, but also suffered from many of its drawbacks, including limited performance, and an intimidating MSRP.

Since then, the ATIV Book 9 has evolved into a full lineup of systems that combine super-thin aesthetics, with capable hardware. The 2014 model we received for review exemplifies this. Though certainly svelte, the system boasts a 15.6-inch 1080p touchscreen, an Intel Core i5-4200U processor, 8GB of RAM, and a 128GB solid state hard drive. These are specifications that should prove capable of handling what most users will throw at it.

Yet one thing has remained the same; the pricing. Our review unit retails for $1,499, a price that’s far above what competitors with similar hardware offer. Lenovo sports near identical specs in its Flex 15 for $799, Acer hocks the similar TravelMate TMP455 for $959, and the Dell’s Inspiron 15 7000 can be outfitted with even more impressive hardware for $949.

The hordes of Ultrabooks that pass through our offices have left us jaded to the thinness of such devices, but the Samsung ATIV Book 9 manages to overcome our cynicism. Thickness comes in at just 16 millimeters, despite the 15.6-inch screen. This means that the 15.6-inch Samsung ATIV Book 9 is thinner than the 13-inch MacBook Air. The slim profile is further enhanced by tapered edges that make the laptop feel even smaller than its diminutive dimensions suggest.

We were also smitten by the display’s bezels, which are about three-quarters of an inch thick on all sides. While these aren’t the smallest we’ve seen, they contrast with the large screen, fooling us into thinking they were smaller than those found on many 13-inch Ultrabooks – until we broke out the tape measure, at least. Yet, in spite of the bezels, the display as a whole feels sturdy, a trait no doubt helped by the broad, beefy hinge connecting it to the system’s body.

Unfortunately, the chassis doesn’t hold up as well under close examination. The use of metallic construction isn’t enough to keep this thin system from bending under its own weight, and chassis flex is the result. Picking the device up with one hand often generates a groan or pop, as various components shift. While this isn’t a functional issue, it’s disappointing, given the system’s premium price.

Connectivity consists of HDMI, Mini VGA, two USB 3.0 ports, one USB 2.0, a card reader, a combo headphone/microphone jack and Ethernet (via a USB to Ethernet adapter). This is a modest, but adequate selection of ports for a modern Ultrabook. 802.11ac Wi-Fi comes standard. The system also boasts Samsung’s SideSync, a utility that lets you view texts or edit files on a Galaxy smartphone from a Samsung PC.

Users who find notebooks crowded should have no problem with the ATIV Book 9, which does everything it can to provide maximum comfort. This begins with the keyboard, which drops the numpad, and instead provides a spacious, centered keyboard flanked by several inches of room on each side. This configuration may anger accountants, but it provides a comfortable experience for everyone else.

The keyboard is surprisingly good too, given the system’s profile. Key travel is acceptable, keys bottom out firmly, and the layout is refreshingly conventional. These factors will help touch-typists reach high levels of accuracy with a minimal learning curve.

Below the keyboard is a massive touchpad that measures 4.25 x 3 inches. Few competitors offer more room to wag your fingers, yet the system’s large screen and minimalist keyboard conspire to prevent a sense of claustrophobia. Multi-touch gestures work well, as expected, and the integrated left/right mouse buttons provide more tactile feedback than what we usually encounter.

We weren’t initially enthused with the ATIV Book 9’s display, but only because of the system’s insanely aggressive adaptive dimming which, when turned on, often rendered the laptop unusable. When turned off, the screen shimmered with a maximum output of 290 lux. Further tests revealed that the display can render 97 percent of the sRGB gamut, and reach a contrast ratio of 620:1 at maximum brightness.

The 15.6-inch Samsung ATIV Book 9 is thinner than the 13-inch MacBook Air.

Subjectively, the Samsung looks better than its contrast suggests. This is thanks to accurate color and black levels that are robust, particularly when the display is between 25 percent and 75 percent of the backlight’s maximum output. Movies and games offer a sense of depth, and high-quality photos seem to leap off the screen.

Audio quality is strong too. Maximum volume is loud enough to fill a large room, and while some distortion is present, it’s less problematic than is typical for a slim system. Most will have no reason to pair the ATIV Book 9 with external speakers.

The Intel Core i5-4200U is a common processor that we’ve tested in various systems over the past year. We expected no surprises, and received none, as you can see in our SiSoft Sandra Processor Arithmetic benchmark results.

Samsung’s ATIV Book 9 reached a score of 38.8, which is typical of the Core i5-4200U. Acer’s Aspire R7, which we reviewed with the same processor, scored just a tenth of a point lower, while the Dell Inspiron 7000 (powered by the slightly quicker Core i5-4510U) scored a couple points higher. The Dell XPS 15 blows the ATIV Book 9 away with its Core i7 quad, however, and it’s about $300 more expensive.

Two of the three systems we’re comparing to the ATIV Book 9, the Inspiron 15 7000 and the Aspire R7, have mechanical hard drives paired with solid state caches. This was reflected in PCMark 8 storage benchmark testing, where their respective scores of 2,038 and 2,991 paled in comparison to the Samsung’s mark of 4,893. Dell’s XPS 15 again claimed victory, however, with its score of 4,929.

An Intel HD 4600 GPU powers the ATIV Book 9 in games, and while it’s capable of handling some titles, it couldn’t muster impressive scores in 3DMark. We recorded a Cloud Gate score of 4,306, and a Fire Strike score of 542. These numbers are slightly behind the Aspire R7, which scored 4,365 and 600, respectively. The Dells, both of which have Nvidia graphics, are in another league entirely; the Inspiron 15 7000 turned in respective scores of 7,054 and 1,774, and the XPS 15 was even quicker.

This theme continued when we played League of Legends. The game ran reasonably well with detail set to Medium, achieving an average of 50 frames per second, with a maximum of 60 and a minimum of 40.

Turning detail up to Very High, however, reduced the average to 32 FPS, with a maximum of 38 and a minimum of 25. While certainly playable, the ATIV’s performance here is not impressive, especially considering that League of Legends is one of the least demanding (and simultaneously most popular) games out there today.

The ATIV Book 9’s relatively anemic hardware benefits you when you’re on the road, however, in the form of excellent battery life. In our tests, we found that the system can last almost eleven hours at idle. When we ran it through the Peacekeeper Web browsing benchmark, that number got reduced to a still-impressive six hours and fifty one minutes. This easily bests the Acer Aspire R7, which managed five hours and thirty-nine minutes in Peacekeeper, but barely outpaces the Dell Inspiron 15 7000 Series, which lasted six hours and forty-two minutes.

Samsung’s device is easier to carry than either of those notebooks, however, due not only to its thin profile, but also its weight, which comes in just south of four pounds. This is the lightest 15-inch system we’ve ever reviewed, and it feels that way too when lugging it around. Moving the system is a breeze, and its heft is barely noticeable in a backpack.

Our watt meter reported 11 watts of consumption with the display at 100 percent brightness. This is right in line with the Dell Inspiron 15 7000, Dell XPS 15, Acer Aspire R7 – and almost every other thin notebook in existence. The XPS 15 and Inspiron 15 7000 consume far more power at load, however (87 and 67 watts, respectively) – because of their quicker GPUs.

At idle, this laptop is whisper quiet. Fan noise is virtually non-existent, and our decibel meter (which registers anything above 30 decibels) did not detect a peep. A moderate work load, like a processor-intensive program, increased fan noise to a still-quiet 37.5dB. Only full system load, complete with 3D graphics, forces the fan to a screeching 50dB.

The ATIV Book 9’s cooling system manages to keep it on ice, despite its lazy pace. At idle, the system ran no warmer than 81.9 degrees Fahrenheit, and full system load only increased that figure to 90 degrees. That’s cool for a thin, portable laptop. The far more powerful Dell XPS 15 hit a maximum of 116.9 degrees, and the thicker Inspiron 15 7000 Series maxed out at 102.1 degrees. Unlike those systems, the ATIV Book 9 is lap-friendly, even when working at 100 percent load.

Samsung’s ATIV Book 9 is essentially a 15-inch MacBook Air. If you’ve ever wanted such a thing, well, here’s your chance to own it, albeit with Windows 8.1 instead of OS X. The ATIV Book 9’s razor-thin profile, minimal heft, and bright display make it more portable than some 13-inch Ultrabooks, yet it still provides the space and comfort of a large, mainstream laptop.

These goals are achieved by sacrificing performance, however. The ATIV Book 9 is not slow, but the same hardware can be found in systems that cost almost a third of this laptop’s MSRP. Acer’s Aspire E1, a $599 notebook we reviewed in March, matches or exceeds this $1,500 laptop’s processor and GPU performance.

Is this an acceptable sacrifice? We’re sure some readers will answer “of course!” Others, however, will wonder why they’d purchase the ATIV Book 9 when alternatives like the Dell Inspiron 15 7000 offer comparable hardware for hundreds less, and are only a few millimeters thicker.

Buyers looking for maximum portability in a large laptop will flock to the Samsung ATIV Book 9, but those who value performance may consider it a raw deal.

Topics
New AMD laptop CPU destroys its predecessor, winning by 90%
Best Gaming PC Deals: Save on RTX 3070, 3080, 3090 PCs
This 8K monitor has 3D tech that can be viewed from all angles
Apple just found a bizarre way to make virtual keyboards less annoying
Experts fear ChatGPT will soon be used in devastating cyberattacks
Lenovo’s Surface-style Chromebook just got a big price cut
Save $620 on this Lenovo gaming laptop with an RTX 3070
AMD vs. Intel: which wins in 2023?
Dell is having a big sale on business laptops — up to $2,500 off
Ends soon: sign up for NordVPN today and save up to 62%
Lenovo is practically giving away this 2-in-1 Chromebook today
This micro-LED advancement is exactly what AR and VR needs
An AI-generated TV channel is mimicking ’90s sitcoms to nightmarish effect