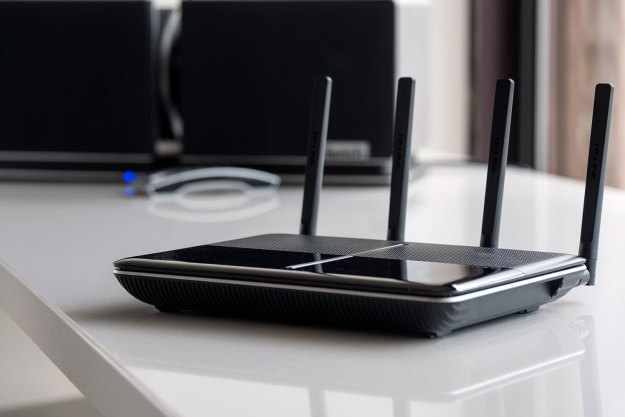 “TP-Link’s AC3150 is a no-frills router for media-hungry households.”

We’re all starting to use more bandwidth. Whether it’s high-resolution Netflix streaming, downloading games, or just meandering around YouTube, it’s not just computer nerds who need a faster wireless network. No one wants to deal with buffering.

Enter the TP-Link AC3150. This svelte little router looks unassuming, but pumps out 3.1Gbps over the 2.4 and 5GHz Wi-Fi channels. It has all the features demanding users already expect, like MU-MiMO, built-in USB ports, and a 1.4GHz dual-core processor.

But at $200, the AC3150 is a lot more than the average user is used to spending on more basic routers. Can TP-Link bring truly fast Wi-Fi to the masses, or will its price tag scare them off?

The TP-Link looks bland, and that’s okay by us. Lately we’ve seen a trend of high-end routers that look like demonic altars or NASA equipment, but the AC3150 just looks like a router. It’s modern enough, with a glossy black panel to offset the vented plastic, and wouldn’t look out of place on a shelf or by your TV.

Its modest size helps, as well. At 10.4 inches wide and 7.8 inches deep, it takes up almost the same footprint as the half-inch taller Netgear Nighthawk X4S. It’s a fraction of the size of routers that offer 5Gbps of bandwidth and above. Its subtlety in comparison to those Wi-Fi behemoths can’t be understated. You shouldn’t have trouble finding a place to put the AC3150.

Four antennas stand straight up from the back of the device, but they’re the standard swivel and hinge affair, so they could extend a number of angles for wall mounting if need be. This is enough to provide coverage in most situations, though it may limit options compared to routers with six (or more) antenna.

Shooting right down the middle

The main focus of any modern router is wireless connectivity, and the TP-Link has a solid 3.1Gbps of it. It packs in 1,000Mbps of bandwidth over the 2.4GHz band and 2,167Mbps over the 5GHz band, to be exact. That’s more than the 2.53 and 2.2Gbps (respectively) from the X4S and Zyxel NBG6815, which are both right around the same price point.

Wired connectivity fits the same “just above average” bill as the wireless connectivity. The back panel plays host to a quartet of gigabit Ethernet ports, a USB 2.0, and USB 3.0 port. All of this is fairly standard in modern routers, though the availability of two USB ports speaks to the AC3150’s focus on media.

When it comes to router tests, my house is second only to “E3 press conference” in terms of Wi-Fi demands. There are five people living under the same roof, with lath and plaster walls, seven computers, and an assortment of smartphones and consoles.

The AC3150’s subtlety helps it blend into your home.

Download speeds were solid, but those tend to swing wildly depending on your ISP and the server you’re connecting to. Speeds from a Steam download peaked at 6.5MB/s, a significant boost over the Linksys E3000 that usually powers our home network. In the evenings, when streaming picked up, MU-MiMO handled the increase adeptly, with only a handful of brief hiccups.

At the end of the test period, all of the roommates agreed there was a noticeable increase in speed both during daily use and media streaming. Those who played games also reported fewer dropped packets and better response times, although they agreed it was still short of a wired experience.

Just plug it in and go

Setup is completely painless. As soon as the router is plugged in, accessing it is as easy as joining the default network. A step-by-step guide asks for an SSID and password in plain English. Where some routers expect you to handle all of the settings yourself, the TP-Link helps you through the process, whether you like it or not.

It’s almost easier than Google’s OnHub, another TP-Link venture, which requires a mobile app for setup. The only main caveat being that the manual still references TP-Link’s setup domains in the instructions. Both the manual and quick start guide reference the tplinkwifi.net domain for setup, which TP-Link failed to renew. You can still set it up by navigating to 192.168.0.1, however, which is also in the instructions.

TP-Link’s overhauled user interface carries over to the management panel. There are basic and advanced tabs, although much of the same functionality is present in both, just displayed and worded differently. That includes print server setup, network-attached storage management, VPN configuration, and port forwarding.

There are actually a few elements of Google’s OnHub platform that have made their way over, like phrasing more advanced features as questions, and showing a complete network breakdown on the front page. Administration panels grow more user-friendly with every revision, and TP-Link’s latest makes a huge leap forward.

As media resolutions and streaming demands grow, so does the need for a high-powered router in the average home. The TP-Link does a solid job of reaching across that aisle with dead simple setup and powerful wireless connectivity, while leaving the attitude and garish styling at home.

Its price is just as friendly as its face. For $200 you get more bandwidth than the slightly-more-expensive X4S, although the Zyxel offers 2.2Gbps for less than $150, which is likely more than enough for smaller households. Gaming routers that raise the bar to 5Gbps or higher blow right past $200, leaving the TP-Link right in the middle of the pack.

The TP-Link’s greatest strength is its conventional, straight-forward design. It works like most routers, and it looks like them, too – but it has many subtle refinements and advanced features that give it an edge. While monstrous, $400 routers will always beat more modest offerings, the TP-Link AC3150 represents the cutting edge of routers an average household can actually afford.