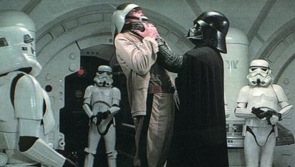 Do you like to download music? Or perhaps you have a neighbor who’s skilled at hacking and likes to download music? If so, hopefully you don’t live in Britain, because starting in April 2010, such offense may earn you expulsion from the internet and harsh fines.

The UK’s government has recently been viewed as a strong supporter of the entertainment industry’s campaign of “copyright enforcement”. They’ve cast a blind eye while citizens were subjected to legal threats concerning public singing and while independent artists found major labels stealing their work. According to one UK artist, in their experience music labels steal more music (from small copyright-holders) than filesharers.

Yet it is the filesharers that Britain’s government is looking to punish. Like France’s currently stalled effort, Britain’s majority Labour Party is opting for a 3 strike policy that will involve two warnings sent to offenders, followed by ISPs being forced to disconnect their customers.

The proposal is enormously unpopular among the public, tech professionals, law enforcement, and internet service providers. ISPs are bemoaning the government shouldering the extra costs of expensive technologies such as Deep Packet Inspection (DPI) technology to scan each data packet traveling their networks for illegal content. They also aren’t pleased with having to terminate paying customers.

Likewise, law enforcement officials are opposed to the plan. The Serious and Organised Crime Agency (Soca) and the Metropolitan Police’s e-crime unit, as well as two British intelligence agencies — MI-5 and MI-6 — all voice formal or informal opposition to the plan. States one police official, “It will make prosecution harder because it increases the workload significantly.”

And the proposal is unpopular among members of the tech community. TalkTalk, a British telecom, has launched a campaign attacking the plan, highlighting a recent demonstration where security experts showed that secured home Wi-Fi networks could be cracked with ease and used to download infringed content, setting your neighbors up for some harsh punishment.

Despite this seemingly overwhelming opposition Lord President of the Council Peter Mandelson, a prominent British politician will be pushing for the plan to become law in April 2010, to the joy of the movie and recording industry. Lord Mandelson insists the enforcement will be flawless and accurate, stating, “We will put in place a fair, thorough process, involving clear warnings to people suspected of unlawful file-sharing, with technical measures such as account suspension only used as a very last resort. Only persistent rule breakers would be affected — and there would be an independent, clear and easy appeals process to ensure that the correct infringer is penalised.”

The opposition’s last hope is to fight the bill when it goes to parliament in November. The bill stands a good chance of passing with the majority of the Labour Party backing Lord Mandelson. However, the Conservative party and Liberal Democrat parties have both voiced objections to the bill.