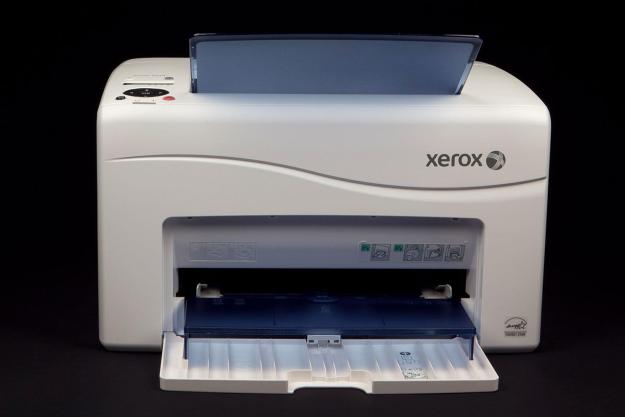 “While unexceptional in appearance, the Xerox Phaser 6010 is compact laser printer with very good quality color output. Only things missing are duplexing and Wi-Fi.”

While Xerox is synonymous with photocopy (due to the decades of incorrect usage as a verb), Xerox is also a pioneer in laser printing. When you hear the name, however, you might imagine giant machines that need a forklift to put in place, but Xerox makes some highly compact printers as well. And although these printers are aimed at the small business or workgroup markets, some, like the Phaser 6010 we tested, will work at home or in a college dorm. Despite missing a couple convenient features, is this $250 still worth the investment?

The Phaser 6010 is a small, fairly nondescript laser printer. It measure a compact 15.5 x 12 x 9.2 inches and weighs in at 23.4 pounds, so it will easily fit on most desktops. A small cluster of controls is located on the front left side of the top panel, along with a two-line LCD. Here’s where you adjust settings, cancel a print job, or put the printer into a power-saving mode.

The top panel is where the prints are ejected, and there is a large flip out paper catcher. It’s a bit flimsy and we managed to knock it off of the printer twice when using it, but it snaps right back on.

The four color-toner cartridges are loaded by pulling the right side-panel down, and the rear panel pulls down to free a paper jam.

A pull-down panel on the front of the printer exposes the two paper input trays. The lower tray can hold up to a hundred sheets, and the top tray has a capacity of up to 10 sheets of specialty paper or heavy stock.

That’s it. We really meant it when we said nondescript, and for printer design it’s as simple as it gets.

The Phaser 6010 is packed in a fairly large box, so it’s surprising to lift the top piece of foam packing and find a printer that’s very compact. Beside the printer itself, there’s not much else in the box other than a power cord, a CD, and three very small booklets (an Installation Guide, Connection Setup Guide, and Quick Use Guide).

The CD contains the detailed documentation (though you probably won’t ever need it) and drivers for Windows and Mac OS X. For the IT guy, Xerox includes its CentreWare software, a network printer administration tool that few home users will ever even look at. Also included, and automatically installed, is PrintingScout, which opens on your screen when a print job is sent to the printer and displays the printer status including error messages and estimated toner levels. The toner levels can also be viewed from the printer’s front panel LCD.

Xerox ships the four color-toner cartridges preinstalled in the printer, so it’s ready to go when you unpack it.

Setting up the Phaser 6010 is exceptionally easy. Just unbox the unit, plug in the power cord, connect a USB or Ethernet cable, and run the setup program from the disc. The Phaser 6010 does not offer Wi-Fi, so it’ll either have to be fairly close to your computer or network router – an inconvenience considering everything today is going wireless.

If you need to produce a report or flyer with charts, graphics, and photos, you won’t be embarrassed with the quality of the Phaser 6010’s output.

Xerox claims a color output speed of up to 12-pages-per-minute output speed in color. In our tests, we got 10ppm using the Normal default print driver setting, which is close to the speed Xerox states. The first-page out speed was a bit slower at 22 seconds (Xerox touts 17 seconds color, 14 seconds black and white), but things move right along once the print job gets going. The Phaser 6010 does not have automatic duplexing, so if you need to print both sides of a page, you’ll have to do it manually.

The Phaser 6010’s image quality is very good. Colors were spot-on accurate, though just a touch darker than the reference prints from a calibrated Epson Stylus Pro 3880 that we use. We printed our test images using both HP Office Paper ($3 a ream in our local supermarket) and on Hammermill Premium Inkjet and Laser Paper ($12 a ream at an office super store). Print quality was actually just a bit better on the less expensive paper, though you’d have to have both test prints right up against the reference print to see the differences.

The Microsoft Word file that we use for speed testing had crisp text and excellent quality on the business logo used in the document. If you need to produce a report or flyer mixed with charts, graphics, and photos, you won’t be embarrassed with the quality of the Phaser 6010’s output.

One thing that’s notable if you have to produce really top-notch business documents or output with very accurate color: Most printers in this price class provide basic color adjustment features, but the Phaser 6010 goes way beyond this and offers the capability of refining color output to an exceptionally granular level. Again, most home users will never take advantage of this, but it shows how seriously Xerox takes output quality.

For the most part, the Phaser 6010 is a generic desktop color laser printer. It’s very light and compact, and very quiet, even when printing. It’s not as fast as a few of the other color lasers in its price class that we’ve recently tested, but given the very high quality of the output, we don’t see any user being unhappy about getting 10ppm from the printer.

Supply costs are a bit on the high side. Unfortunately, this isn’t uncommon, but the ability of the Phaser 6010 to print only in monochrome mode helps saves on toner costs. The Phaser 6010 lacks two features which would have raised its score: Wi-Fi connectivity and automatic duplexing, the latter of which is becoming a standard feature in printers at this price level and helps save even more money.

The Phaser 6010 is a nice compact printer, and would work well at home or at school. But you can get a desktop color laser for about the same money that provides Wi-Fi and duplexing.