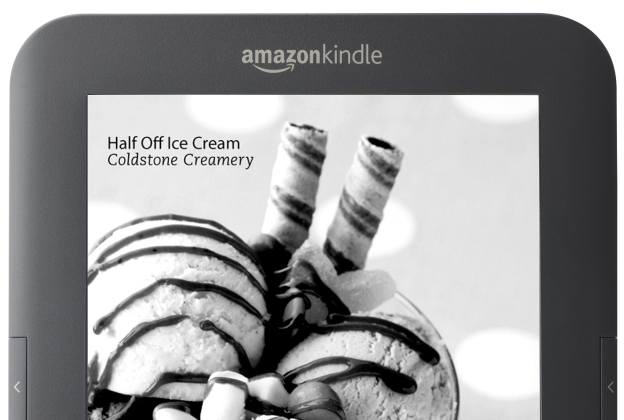 All you bargain shoppers that snatched up Amazon’s ad-infused Kindle earlier this year for the $25 price cut may be thrilled at the e-commerce giant’s latest announcement. In a move that makes sense, Amazon has decided to pair its Groupon clone, AmazonLocal, with both the Kindle and Kindle 3G with Special Offers.

Yes, Amazon’s daily deal service will soon begin beaming local deals to customers’ Special Offers Kindles; these local deals will of course pop up on the screensaver while you’re not reading. The AmazonLocal integration will be delivered in a few weeks within a software update for the Kindle.

The new service will launch first in New York City, and eventually will expand to other cities later in the year. Special Offer Kindles will allow customers to pore through the AmazonLocal deals in the city.

You’ll be able to purchase these deals directly using your Kindle without having to fumble out a credit card, as Amazon will most likely have you’re go-to shopping card on file. Once purchased, customers just need to flash the vouchers—displayed on their Kindle or printed out—to the local merchant. The voucher can also be printed via local.amazon.com/purchases.

“We think customers are going to be thrilled with this new, convenient way to take advantage of AmazonLocal deals – you can view, purchase, and redeem the deals using only your Kindle – no computer, no printer, no hassle,” said director of Amazon Kindle, Jay Marine, in a statement.

Gotta love that synergy. Amazon is most likely thinking that this will give the Kindle a boost over competitors like the Nook this holiday. The Kindle with Special Offers is priced at $114 and $164 for the regular and 3G respectively. The integration decision may also strengthen AmazonLocal, which is now available in 44 locations, but is no Groupon yet.

Some of the offers coming out of the New York City launch include a $7 one-hour bike rental in Central Park, $59 for a month of Bikram Yoga and a $45 lunch at City Winery.