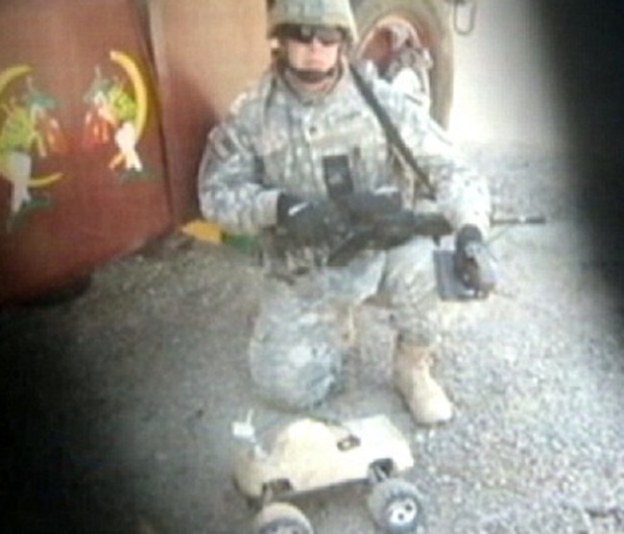 The lives of six U.S. soldiers were saved by a modified remote-controlled truck, according to an Army officer stationed in Afghanistan.

Sent to Staff Sgt. Christopher Fessenden back in 2007 by his brother Ernie, the toy truck was the creation of Ernie and Kevin Guy, the owner of a hobby shop in Rochester, MN. Along with sporting a desert-camouflage paint job, the truck was also mounted with a small video camera that transmitted footage to a monitor mounted on Chris’ rifle.

In an email to Ernie, Chris Fessenden wrote that the truck had been responsible for locating at least four explosive devices before it met with an explosive end last week. As some of Chris’ fellow soldiers were using it to scout ahead of their patrol, the truck encountered a tripwire connected to what was estimated to be 500 pounds of explosives. The bomb went off and took the truck with it, but the soldiers trailing behind it were unharmed.

“I got an email from [Chris] that said, ‘Hey, man, I’m sorry, but the truck is gone,'” Ernie told ABC News. “The neat thing is that the guys in the Humvee were all right.”

The pair who modified the Traxxis Stampede truck for Chris estimated the total cost of the “toy” to be around $500. They plan to put together another one to send him soon, as well as some extras to send other soldiers stationed in Afghanistan.

“We do mounted patrols, in trucks, and dismounted by foot,” wrote Chris in the message to his brother. “The funny thing is the Traxxis does faster speeds than the trucks we are operating in under the governing speed limit… so the traxxis actually keeps up with us and is able to advance past us and give us eyes on target before we get there.”