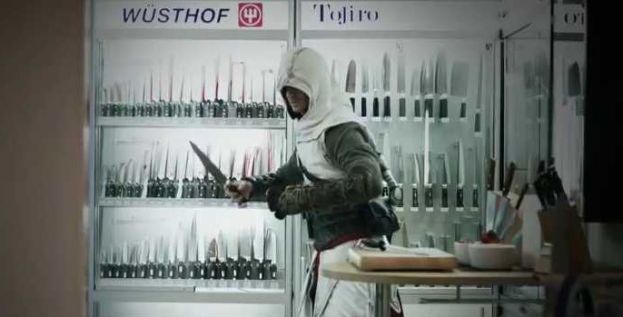 The release date for Assassin’s Creed: Revelations is looming larger, so it’s no surprise we’re seeing more promotion for the next installment of Ubisoft’s hit franchise. What is a pleasant surprise, however, is how entertaining some of it has been.

For example, Ubisoft’s Dutch contingent has created a fun video featuring Assassin’s Creed protagonist Altair struggling to adapt with the conventions of modern-day Amsterdam. The video shows Altair navigating a busy city street and then puzzling over his weapon options and the best way to enter an apartment.

The video’s less than a minute long, but it’s a great way to remind Assassin’s Creed fans that November 15 can’t arrive soon enough.

Ubisoft and Netflix partner for an Assassin’s Creed show and mobile game
Everything announced at the September 2022 Ubisoft Forward
Assassin’s Creed Mirage announced with more info coming next week
The best PS5 games for 2022
‘Wordle’ today, September 21: Answer, hints, and help for word of the day (#459)
Aliens Dark Descent: release date, trailers, gameplay, and more
Call of Duty: Modern Warfare II beta has some serious pacing issues
The best Nintendo Switch shooter games
Scorn will make your stomach churn and your brain hurt
Devs show what in-development games look like after GTA 6 leak
Logitech made its own lightweight handheld built for cloud gaming
Fortnite Chapter 3 guide: All week 0 quests and how to complete them
The best games on PC Game Pass