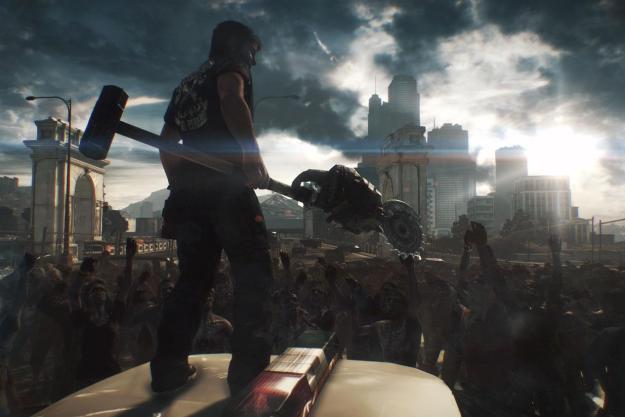 “Dead Rising 3 scores points for its huge zombie hordes and iterative improvements, but it's clear this is a series that could stand to evolve into something more.”

Dead Rising 3 is awash with zombies. Not just zombies. Freaking zombie hordes. Triple the number that you saw in any one moment of the previous games, and you’re still not there. That’s next-gen power for you. The game itself is rooted in the same design philosophy as the previous games – and that’s not necessarily a good thing – but the sea of zombies facing you every time you turn a corner in the crumbling city of Los Perdidos never fails to remind you that, yes, this is indeed an Xbox One-exclusive next-gen launch title.

It’s been 10 years since the events of Dead Rising 2, and the world is a very different place. The zombie epidemic is a known quantity, a familiar hazard of everyday life. Those who are infected but not turned are required by law to get “chipped” with a device that both tracks their locations and releases the anti-zombie drug Zombrex into their systems every 24 hours.

The promise of Dead Rising, as ever, isn’t quite as fantastic as the reality of actually playing the game.

This is the world that tender-hearted mechanic Nick Ramos knows, the one that guys like Frank West and Chuck Greene, stars of the past games, helped to create. The city has already been overrun by the time the story opens. Nick quickly meets up with his obligatory core group of friendly survivors, and not long after we learn that the military is one week away from razing the city with weapons of mass, fiery destruction. To the escape plane! But first we need fuel! And other stuff!

Los Perdidos is the new open world setting for Dead Rising 3, a sprawling California city divided into four neighborhoods that are connected by a network of rubble-filled freeways. It’s not nearly as colorful as the locations visited in previous games, but the more grounded take on the world serves to foster the air of desperation that Dead Rising 3‘s story tries to bring across.

That’s actually part of the problem. The Dead Rising series has always had a sense of humor, and it certainly lives on here. You can keep Nick’s default mechanic duds, but you can also dress him up as anything from a lady about town to a Luchador wrestler. That’s how he’ll appear in the world and that’s how he’ll appear in cutscenes. Just try to take a poignant moment seriously when the agent of your actions in the world looks like a crazyhouse escapee.

The uneven writing doesn’t help matters. This is a story that can’t seem to decide if it wants to grow up or continue to revel in the campy zombified playground that’s at the heart of the series. It should be the latter, and plenty of story beats support that – particularly toward the surprising climax – but there’s a level of seriousness that feels out of place. The story is at odds with itself almost from the start. A heartfelt moment with a soon-to-be-reunited lover is quickly followed by a dash to assemble a prosthetic flamethrower arm. You’re best off just embracing the ridiculousness, especially since the series-standard gameplay supports it so well.

Los Perdidos is Dead Rising’s first fully seamless open world, with no load screens separating interiors from exteriors, and only a brief delay as the game moves from gameplay to cutscene then back again. It’s littered with everyday objects that you can pick up and either consume (for healing items) or bash zombies to pieces with (for everything that isn’t a healing item).

There are still some limitations; the next-gen execution doesn’t now mean that every little thing you see in Dead Rising 3 can be interacted with or wielded like a club. There’s frustration felt from walking into a clothing store filled with racks, but only finding a handful of items that can actually be worn. The promise of Dead Rising, as ever, isn’t quite as fantastic as the reality of actually playing the game. It’s an improvement though.

Dead Rising 3 is a brute-force example of next-gen technology.

The world is bigger than it was in the previous titles by a significant margin. Driving from place to place is a necessity, and the number and assortment of combo vehicles – jury-rigged contraptions that handle the realities of zombie world better that stock automobiles – has been upped since their initial appearance in Dead Rising 2. The actual act of driving is often more frustrating than not, thanks in equal measure to how fragile each ride is and how many streets are blocked off. You quickly fall into the rhythm of driving a car, jumping out just before it blows up, and then shoving your way through a horde of zombies as you frantically search for another car so you can repeat the process all over again.

The controls are similarly underwhelming, whether you’re behind the wheel or on foot. Cars don’t handle well at all, slipping and sliding around the road as you try to avoid thicker clusters of zombies. You can’t just plow through them in most vehicles, not if you want to actually reach your destination in the same ride you started with. Nick doesn’t handle much better on foot. The basic running and zombie-bashing works well enough, though it still no more complex than light/heavy attacks, plus the occasional sprinting tackle. Gathering items is a pain though. There’s no target lock of any kind, which makes the act of trying to grab, say, a healing item clumped alongside a bunch of useless items an exercise in rage-filled frustration.

The overall structure of Dead Rising 3 is largely the same as it ever was. You rescue survivors (who can then be summoned from a bulletin board at the safe house to join you) and take on an assortment of “Psycho” bosses (each themed after one of the Seven Deadly Sins). Most story missions and non-Psycho side missions are little more than spit-shined fetch quests that exist to send you scurrying off into the zombie hordes. This becomes particularly tedious in the later stages, when “more elaborate” missions simply add a comically long list of fetch steps to any given objective.

One of the endgame missions demonstrates a certain self-awareness of this shortcoming. It’s not clear if Capcom Vancouver is poking fun at the player or the tropes that the series continues to be mired in – or both – but it’s more frustrating than thought-provoking. Nick must run around a zombie-filled subway station trying to flip a switch that will make Important Things happen. Only the switch is without power, so he needs to find a power station. He finds the power station, but it’s busted, so he needs to find some wires. It’s amounts to a snaking series of “You’ve got to be kidding me” moments that serve to highlight Dead Rising’s long overdue need to evolve.

Don’t read all of this and conclude that Dead Rising 3 is a total disaster. The Los Perdidos playground is as satisfying a zombie slaughter zone as we’ve ever seen in a Dead Rising game. You’ve got larger hordes to contend with. An insanely long list of combo weapons to find blueprints for and build. That act of combining two objects is also easier with the removal of workbenches; provided you’ve found the necessary blueprint, you can create combo items anywhere, with weapons and vehicles alike. Old favorites like the Laser Sword are joined by new ones, like the sledgehammer-meets-grenades Pummel Blast.

Revamped safe houses also help to make the everyday task of mass re-murdering countless zombies more engaging. A new weapons cabinet allows you to spawn in any non-food item you’ve ever held in the game, even combo weapons. Let’s be clear: every single thing you pick up is automatically stored in the weapon cabinet, like it’s some zombie world Star Trek replicator. This simple change encourages players to pick up and play with everything they see at least once. What’s more, the ease of spawning in fresh combo weapons eliminates much of the tedium involved with searching out one particular item or another.

Dead Rising 3 is also very replay-friendly. You still carry character progression and skill unlocks over into each new playthrough, but you’ve also now got a main menu option that allows you to start from the beginning of any story chapter you’ve unlocked. Time continues to be a factor, but it’s less of an issue in “Normal” mode. It’s not until you switch over to the “Nightmare” difficulty that you start to feel the time crunch that characterized previous Dead Rising games.

The SmartGlass stuff is a welcome add-on as well, provided you have a second-screen device handy. It ultimately amounts to a different mission-giver offering a new set of fetch quests, but the reward – a variety of support requests for you to call in, from zombie-distracting flare drops to drone gunstrikes – is always worth playing with. Just find the biggest horde you can, set yourself up on top of a car or building, and call in an airstrike. It’s a beautiful work of spectacle, and extremely satisfying to see hundreds of zombies eradicated in an eyeblink.

Of course, co-op continues to be the ideal way to play a Dead Rising game. No big changes here. The Xbox One is a more powerful machine, but co-op sessions continue to be restricted to just two players. It would be nice to see some future iteration up that number, but yapping back and forth with a friend in your headset while you work together to thin out the zombie hordes helps to stem the tedium of endless fetch quests.

Dead Rising 3 is a brute-force example of next-gen technology. Capcom Vancouver skips foundational gameplay revisions in favor of iterative improvements and lots and lots (and lots and lots and lots) of zombies. And for that, all can be forgiven. The shortcomings are numerous, sure, but they are far outnumbered by the massive horde of shambling undead that are as fun to pick apart with everyday objects as they’ve ever been.

You might get your Steam Deck sooner than you think